A metamorphosis of the language

“What begins in solitary otherness becomes familiar and even personal. It is about who we are when we are not rehearsing who we are”

Vito Acconci was born on January 24, 1940 in the Bronx, New York, to a family of Italian emigrants. He was named after his grandfather Vito, who used to call him Annibale, a name that Acconci will turn into Hannibal and will use as his pseudonym throughout his poetic career. He had a Catholic education studying first at the Regis High School in New York, then at Holy Cross College in Worcester, Massachusetts, where in 1962 he completed a degree in Literature, followed by a Master’s degree in Writing at the University of Iowa. The irreverent aspect of Vito Acconci is clear from the early years at the college, where he was expelled from the school magazine, of which he was co-editor, for having published spicy stories about nuns and priests. Almost obsessed by authors such as Mallarmè, Alain Robbe-Grillet and Faulkner, Acconci finds writing as something extremely laborious, he wanted to go beyond mere description, wanting to enter the action “trough the act of going”. At the end of 1964 he returns to New York, where he sees, for the first time in person, the works of Jasper Johns and recognizes his own limits as a writer. Johns’ works nullify the gap between representation and the things represented: painting a number is not just the representation of the number, it is the number itself! This is how Acconci starts working on language: transforming it into matter. 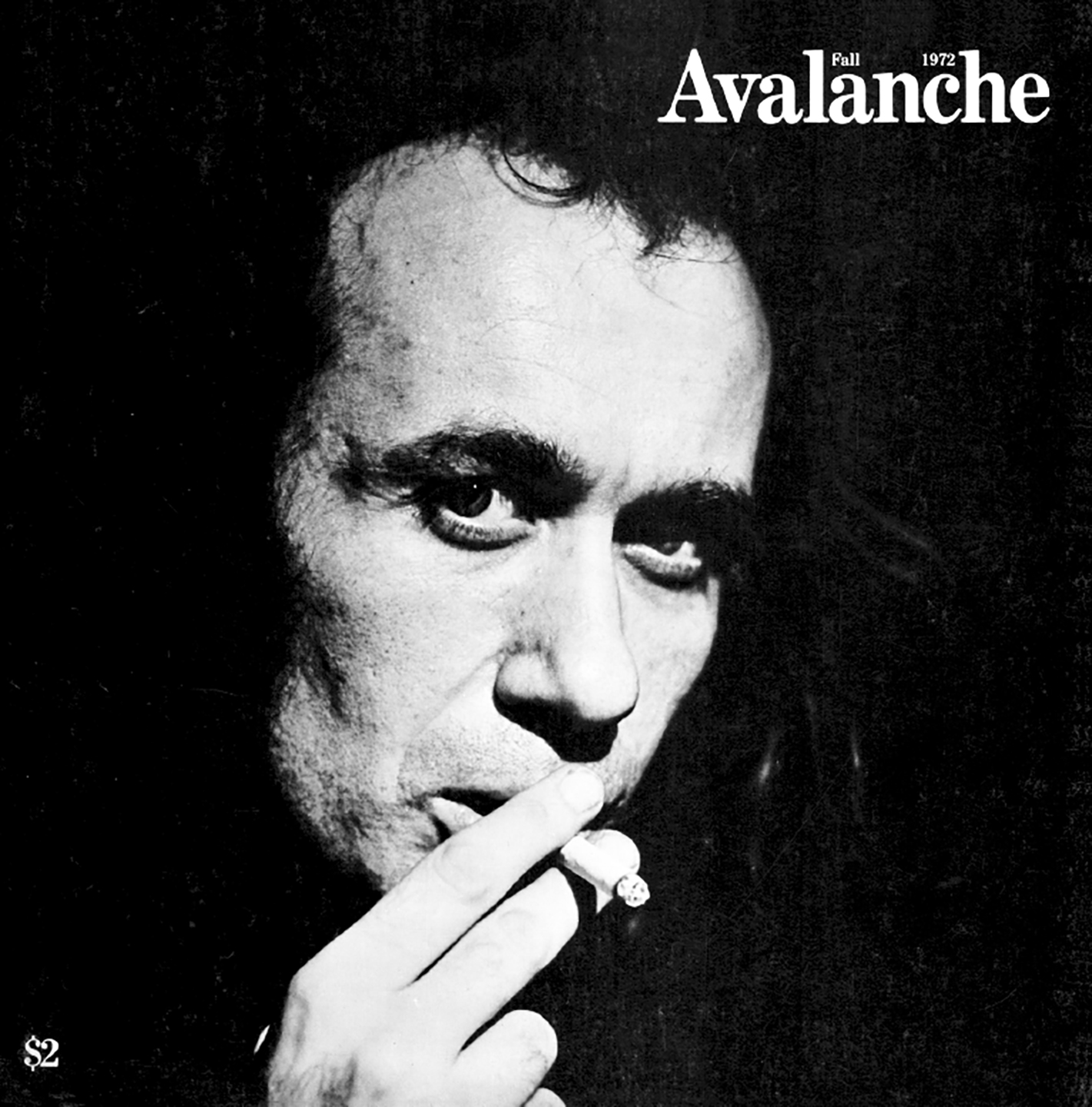 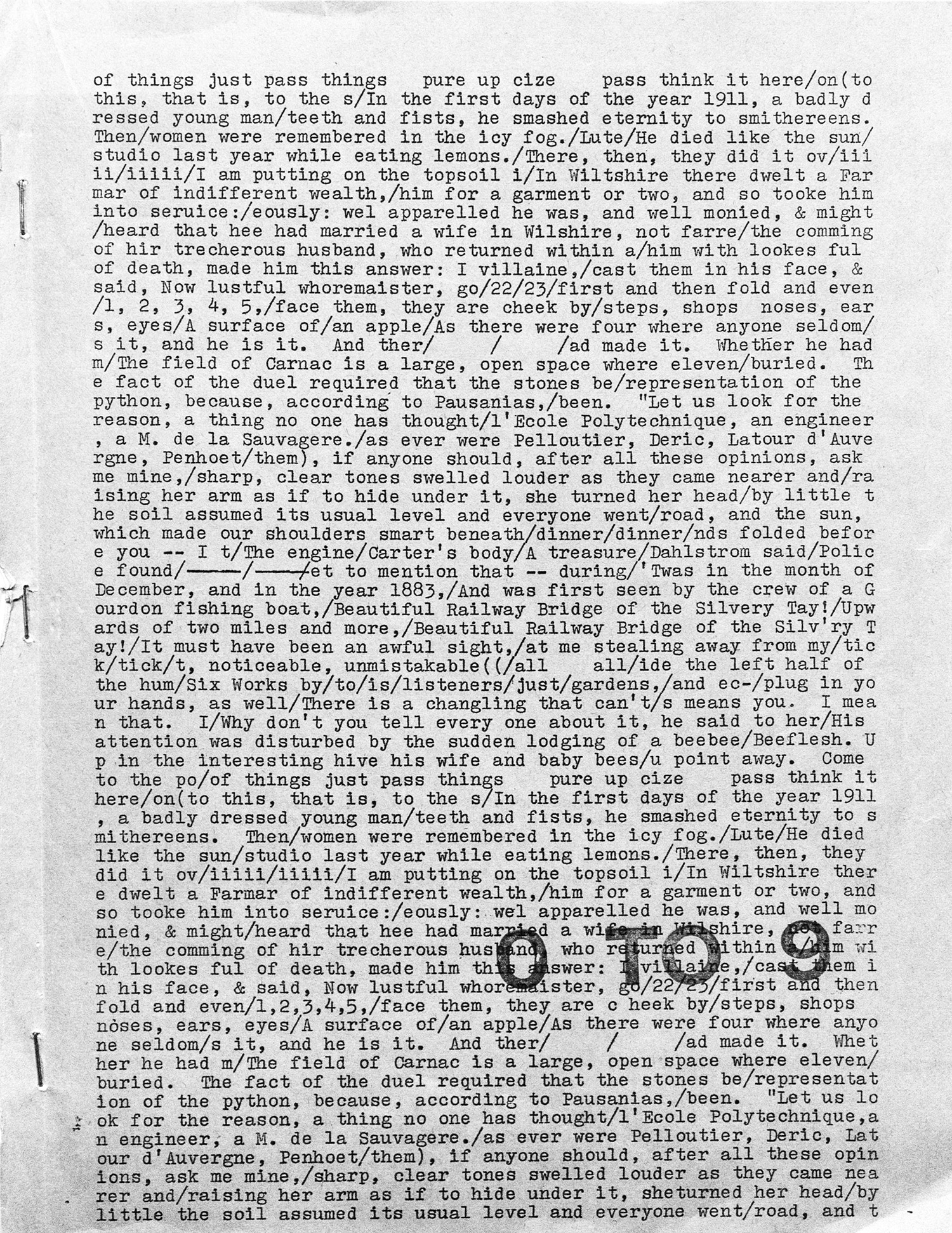 According to Acconci writing acquires a behavioral value, the act of writing is already the written composition. Poetry becomes the only means to recreate the direct, clear, and immediately usable message that he had found in Flag by Jasper Johns. As a poet Acconci treated the page as a physical support that he would modify with words, which would have the physical and plastic qualities of matter. Acconci’s transition from a writer of narrative to a poet is consequential, in fiction he writes about something “in fiction I was writing about something”, in poetry he writes something “in poetry I was writing something”. Acconci moves away from the idea of the poem perfectly placed on the page, looking for other ways of writing different from the academic form.

From 1967 to 1969 he began his editorial effort together with Bernadette Mayer, his wife Rosemary’s sister.  Together they publish six issues of the magazine 0 to 9, a tribute to Johns’ 0 through 9, printed with a mimeograph machine and distributed for free. The development of the magazine reflects the evolution of Acconci’s artistic career: from poetry, (in the first numbers there are texts by authors such as Queneau, Stein, Sanguineti, Apollinaire, Vito Hannibal Acconci himself; the last numbers have texts by artists such as LeWitt, Johns, Smithson and many others) to the performance with Street Work, held in New York in the spring of ‘69. Thanks also to the readings in which he participated in New York from 1967 to 1969 he begins to expand his range of action. The work that he considers the end of his activity as a writer is MOVE/MOVES (DOUBLE TIME): The time taken for me to walk from 7 Ave. & 17th St. NE to 6th Ave., beginning at 9PM. He wanted to complete the reading of the written page in the same amount of time it took him to get from one point to the other on the road. This is when he feels he can no longer consider himself a writer, because his work is slipping into another field, the field of action-art.He leaves the written page behind in order to interact with his surroundings.

Starting in 1969 Acconci devotes himself to art-making. The behavioral quality becomes the material of the work, as opposed to language intended in the two-dimensional nature of writing. The staging of his art becomes a translation of language and poetry. What was previously conveyed through the words written on the page now finds a new support: the body of the artist. 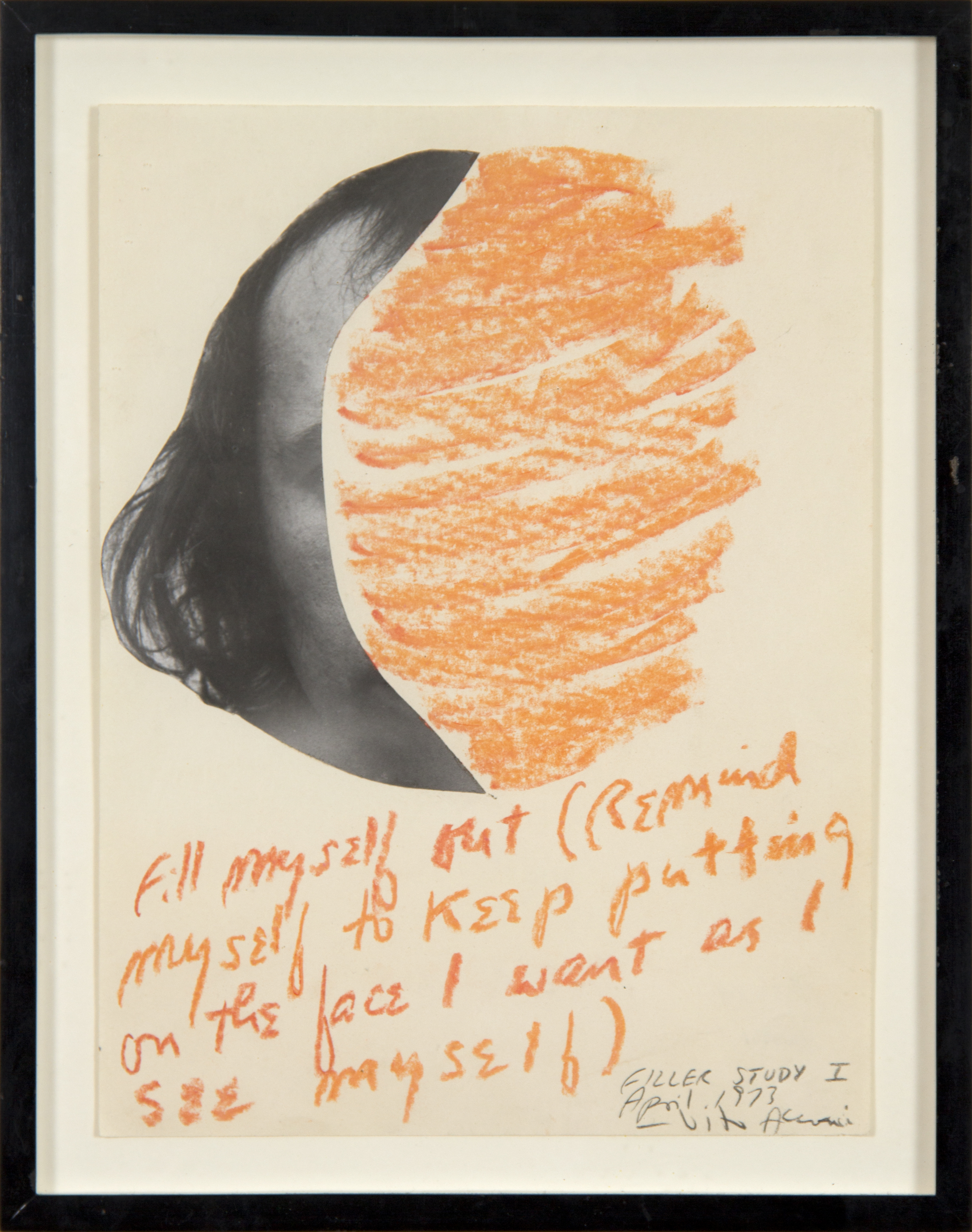 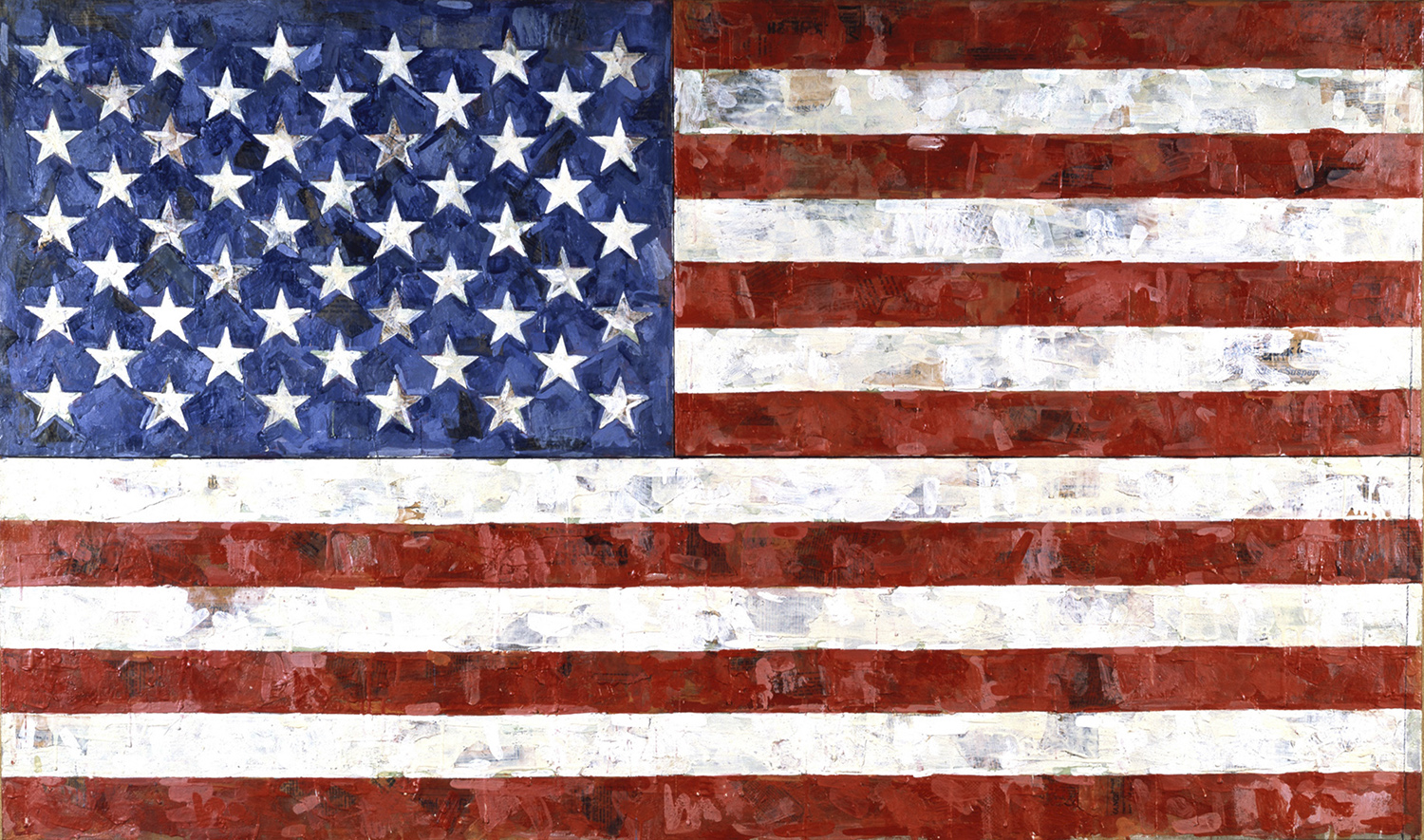 “One thing I am obsessed with is giving viewers choices.

Not to have only one entry, only one kind of path.

The activities and the performances from 1969 to 1973 are real body-works. The perfomance of Trademarks (1970) is in this sense emblematic: the body is intended as a real and actual print media. He bites every part of his body which he manages to reach and covers it with ink, leaving his fingerprints on various materials such as paper, walls and other bodies. Only through the superficial knowledge of our body we can achieve a deeper knowledge: “Show myself to myself – show myself through myself – show myself outside…”. The language is the basis of all his body-works, it is seen not as an abstract phenomenon but as a material that needs to be activated and made tangible through experience, it is also used in the form of narration.

If Fontana rips and cuts the canvas, Acconci tears and modifies his body, sometimes even performing debilitating operations (as in Step Piece; Rubbing Piece; Soap & Eyes; Hand & Mouth, Open; Close; See Through to name just a few). All activities up to 1971 are documented with photos and by films shot in Super 8.

With the Seedbed performance of January 1972 at the Sonnabend Gallery he starts being part of the official gallery circuit. He is signed by Ileana Sonnabend, therefore becoming a full time member of that group of artists that are recognized by the general public. The public performances allow Acconci to manipulate, not only the body, but also the space of the gallery. The body engages into a relation with the modified environment,  losing its leading role. The space of the gallery, malleable at will, complicates the artistic experience due to a greater freedom of movement that expands his interests. The public is treated with neutrality, he addresses everyone indiscriminately, in search of a utopian complicity, but mainly he turns to himself, in an interior discourse that is externalized for fruition.

Through the language and the relationship with the public there’s a real exploration of our nature. Acconci’s urgent speeches resemble streams of consciousness in which the author is free to express himself and his existential anxieties, sharing them with the public that becomes a confessor without an identity, but capable of performing a cathartic function for the artist. The last public performance of Acconci, Ballroom, took place in November 1973, at the Galleria Schema in Florence. During the piece a girl gets up and goes to kiss the artist upsetting the plan of action. From the end of 1969 to the end of 1973, Acconci produced around 200 works, including performances, videos, films, audio-video tapes and installations. In January 1974 we witness the final eclipse of the body with the video installation Command Perfomance in which there is a true declaration of intent that sees the body of the artist abandoning the field of action. In the video, Acconci abdicates his role in favor of the spectator who now has all the keys to understand the work, his physical presence now seems to have exhausted its function: “You can do it… you can do what I was never able to do”. The concept of the body as designed by Acconci had its peak and, like every great empire, it is forced to decay as if it were a historical necessity. In the 1980s Acconci’s interest moved definitively towards sculpture and architecture, performing permanent installations related to the environment. The materials used are ecological and recycled. In an interview Acconci states: “Seedbed was a kind of beginning of architecture. But I didn’t realize it at the time…” So the space of the gallery, too closed and limited, where the public’s behavior is artificial, is replaced by the real public space. He abandons the artistic event to move into the social sphere. 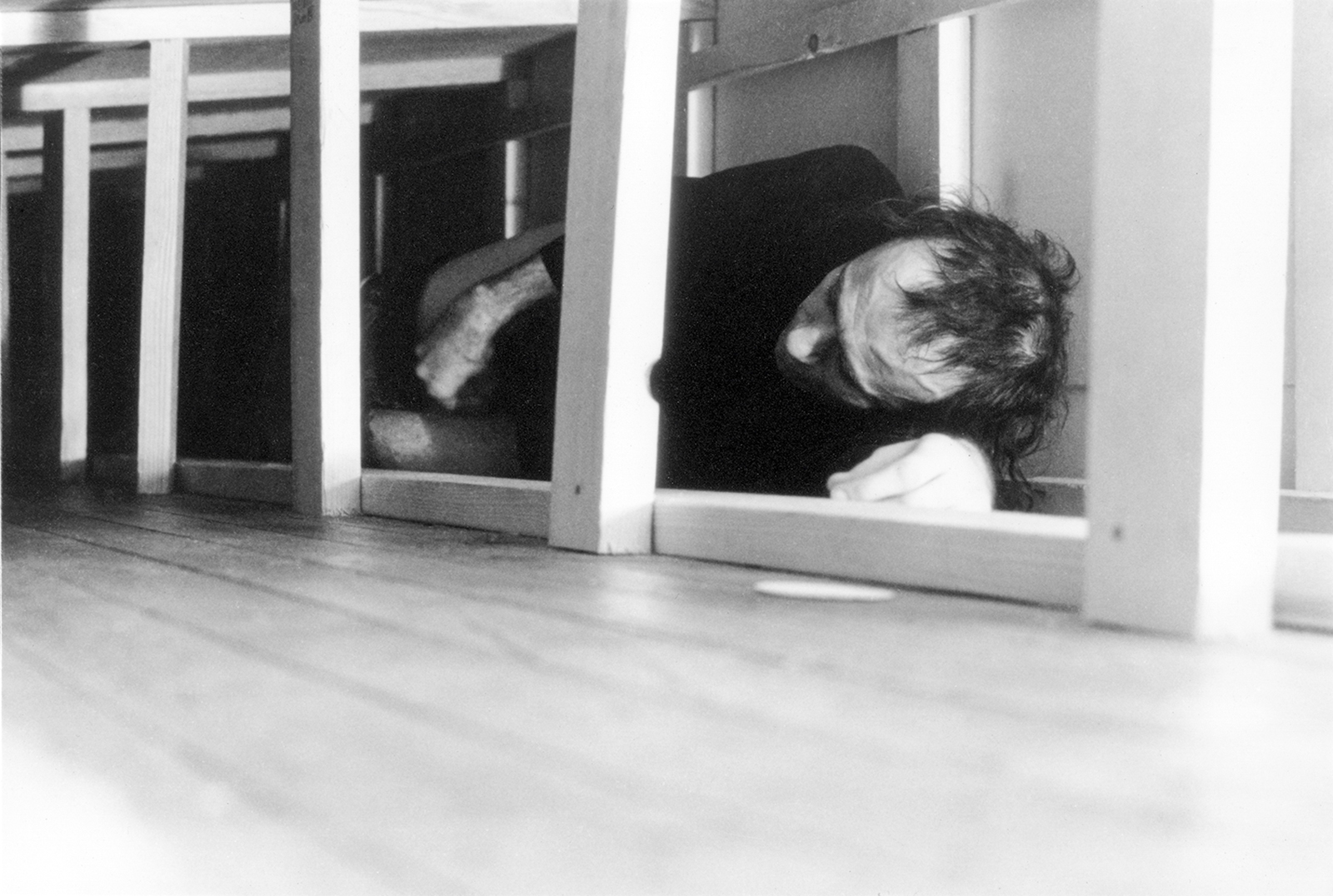 In 1988 he founded Studio Acconci. In his transition to architecture, Acconci still retains his language and his interest in writing, just as in his poems he makes extensive use of pauses and punctuation marks, which give the reader the chance to get lost among the various points of view, so the architectural projects of Studio Acconci are buildings and artifacts that can be modified according to the needs of the territory, the users and the environment, they are reusable even outside the context for which they are created. The architecture is conceived in an open perspective that can be related to the use he made in poetry of the parentheses which in writing open to alternative ways of seeing things, not erasing the main period of the sentence but enriching it: “One thing I am obsessed with is giving viewers choices. Not to have only one entry, only one kind of path. Spin-offs are important. Spin-offs are like parenthetical phrases. “There is no parentheses… I’m sure this idea started for me with writing”. His is a vision that is projected into a still unexplored future: “We don’t know what a future space is going to be, but we want to try to anticipate it. We want to design this space, ideally — though I don’t think we do this, I hope we just haven’t built it, couldn’t have been designed, couldn’t have been imagined before the twenty-first century.  No, we haven´t lived up to that, but I think that´s the only real choice for architecture. It should give you a possibility of a future”. And so a few years after the death of this great precursor, controversial, prolific and eclectic artist, it seems that his architectural work The face of the Earth smiles at him hoping that he found peace in death as he did not find it while alive in the desperate effort to “solve his existence in language”.