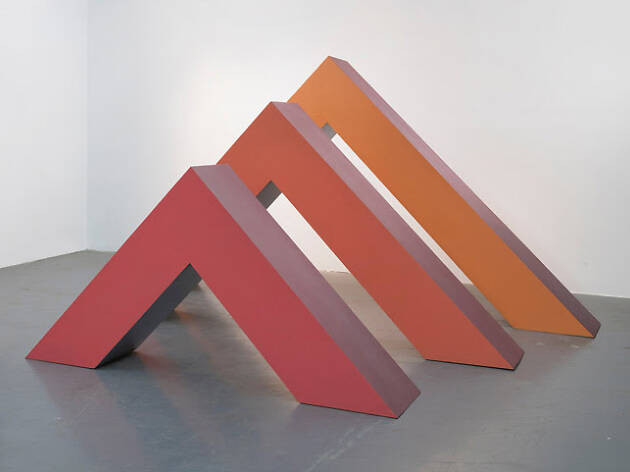 Judy Chicago created a remarkable body of work in Los Angeles and Fresno from 1965 - 72 that has been largely unseen for fifty years. Jeffrey Deitch, Los Angeles will

Judy Chicago created a remarkable body of work in Los Angeles and Fresno from 1965 – 72 that has been largely unseen for fifty years. Jeffrey Deitch, Los Angeles will present a full survey of these early works from September 7 – November 2, 2019. The exhibition will feature paintings, drawings, sculpture, installations, and documentation of Chicago’s environmental and fireworks projects.

Los Angeles was inhospitable to women artists during this period, but the city’s spirit of self-invention and the lack of art market pressure gave Judy Chicago the freedom to create an innovative and original approach to making art. Intent on learning more about industrial techniques that were not taught at art school, Chicago enrolled in auto body painting school, the only woman out of two hundred fifty men in her class. Chicago talks about how she had to struggle to be taken seriously, and as a result “had to get tough.”

Her first group of works coming out of auto body school were her car hoods with their bold female centric imagery, hung on the wall like paintings. The paintings and sculptures that followed drew on her experience with industrial techniques combined with her developing feminist approach to color and form. The work fuses her minimalist forms with a feminine sensibility. The lacquering techniques that she learned in auto body school allowed her to merge color and surface. The color is infused into the material.

Chicago’s 1965 sculpture Rainbow Pickett was included in the legendary Primary Structures show at the Jewish Museum in New York in 1966, but the structure of the art world at the time made it difficult for a young woman to enter the art discourse. Partly in reaction to the challenge of getting her work to be taken seriously, she began her Feminist art project which changed the course of contemporary art. The impact of this project, and her immensely influential work, The Dinner Party, 1974-79, had the effect of partially eclipsing her earlier work. When several of her Los Angeles works were included in the Getty Foundation’s Pacific Standard Time exhibition program in 2011-12, it was a revelation. Since then, her Los Angeles and Fresno works have been shown at museums in Brooklyn, Nice, Chicago, and Miami, but the presentation at Jeffrey Deitch, Los Angeles will be the first time that the full body of work from this period will be presented.

The exhibition will also feature Chicago’s Lifesavers and Fan paintings and major sculptures such as Rainbow Pickett, Trinity, and the participatory work 10 Part Cylinders.

Judy Chicago (b. 1939, Chicago) is an artist, author, feminist, and educator whose career spans over five decades. Since 1996, she has lived in Belen, New Mexico, where her nonprofit arts organization, Through The Flower, is headquartered and where an art space and resource center is being established. Recent exhibitions include Judy Chicago: A Reckoning, ICA Miami, Miami, FL (2018-2019); Roots of The Dinner Party: History in the Making, Brooklyn Museum, Brooklyn, NY (2018); and Inside the Dinner Party Studio, National Museum of Women in the Arts, Washington, D.C. (2017-2018). In the fall of 2019, in addition to the exhibition at Jeffrey Deitch, Judy Chicago will present The End: A Meditation on Death and Extinction at the National Museum of Women in the Arts. The Judy Chicago Portal–a collaboration between the Schlesinger Library, Penn State, and NMWA–will also be launched at the Schlesinger Library at Harvard.