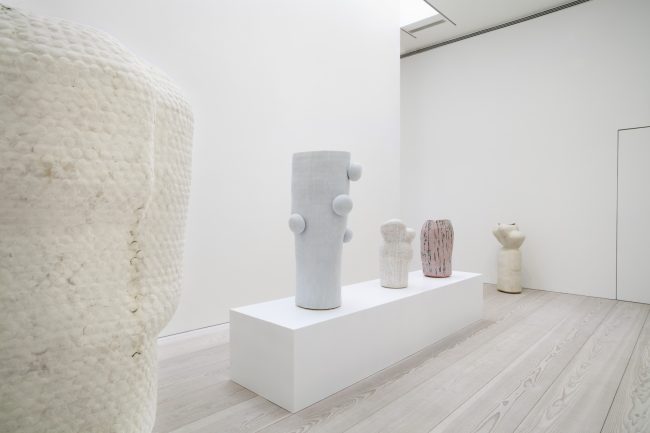 Kristina Riska (b. 1960) is one of Finland’s most internationally renowned ceramic artists. Fysis marks her first solo exhibition at Galerie Forsblom. The works in the exhibition form two series. One consists of stylized portraits and figures alluding to the former women’s psychiatric hospital on Seili Island and the patients who were effectively imprisoned there until 1962. Women were often sent to the island on spurious grounds such as their low socio-economic status or counter-normative behavior, such as choosing to remain unmarried or succumbing to burnout. The stories of the women of Seili are interwoven with Riska’s personal experiences of mental illness in her family, underlining how important it is to discuss these issues openly and break taboos in society.

The title of the exhibition refers to the ancient Greek word denoting growth occurring in the natural world. The ancients espoused the belief that physis occurs by volition as if plants and beasts willed it to happen without the significant influence of external factors. Some of the works featured in the exhibition are based on this concept, while also symbolizing Riska’s creative process of artistic conceptualization, through which she lifts ideas from cognitive darkness into the light. Chance inevitably plays a major role in ceramics, a medium with a mind of its own in quite a literal sense: in the kiln, the clay changes size and shape, and the glazes can take on surprising tones and textures. The basic forms of Riska’s sculptures are nevertheless carefully planned and crafted.

The thin but sturdy undulating walls of the fragile-looking sculptures are achieved using the coil construction technique: Riska uses her fingers to roll out soft, thick coils which she layers one on top of the other. She then decorates the surface with self-made stencils and glazes. Her monumental vessels are not intended for storing anything, but the interior – and the fact that we can see inside the sculptures – is an integral part of each work.

Riska is a senior member of the Arabia Art Department Society of Helsinki. Her internationally acclaimed, award-winning work has featured in numerous exhibitions from Denmark to the US and Japan. Her sculptures are found in many private collections abroad, and she is also represented in public collections, including the Saastamoinen Foundation and the Swedish State collection