Subodh Gupta utilizes everyday objects from his birthplace India to create sculptural forms that speak to our universal memory. His capacity to deal with his origins and communicate cross culturally won him a place at Bourriaud’s Altermodern Tate triennial in 2009. Within this exhibition Gupta exhibited a four meter tall sculpture titled “In Line of Control” made from stainless steel kitchen utensils with an approximate combined weight of twenty-six tons. These kitchen utensils formed a nuclear mushroom cloud. A shape and image that we essentially all fear, wherever our kitchens are located. 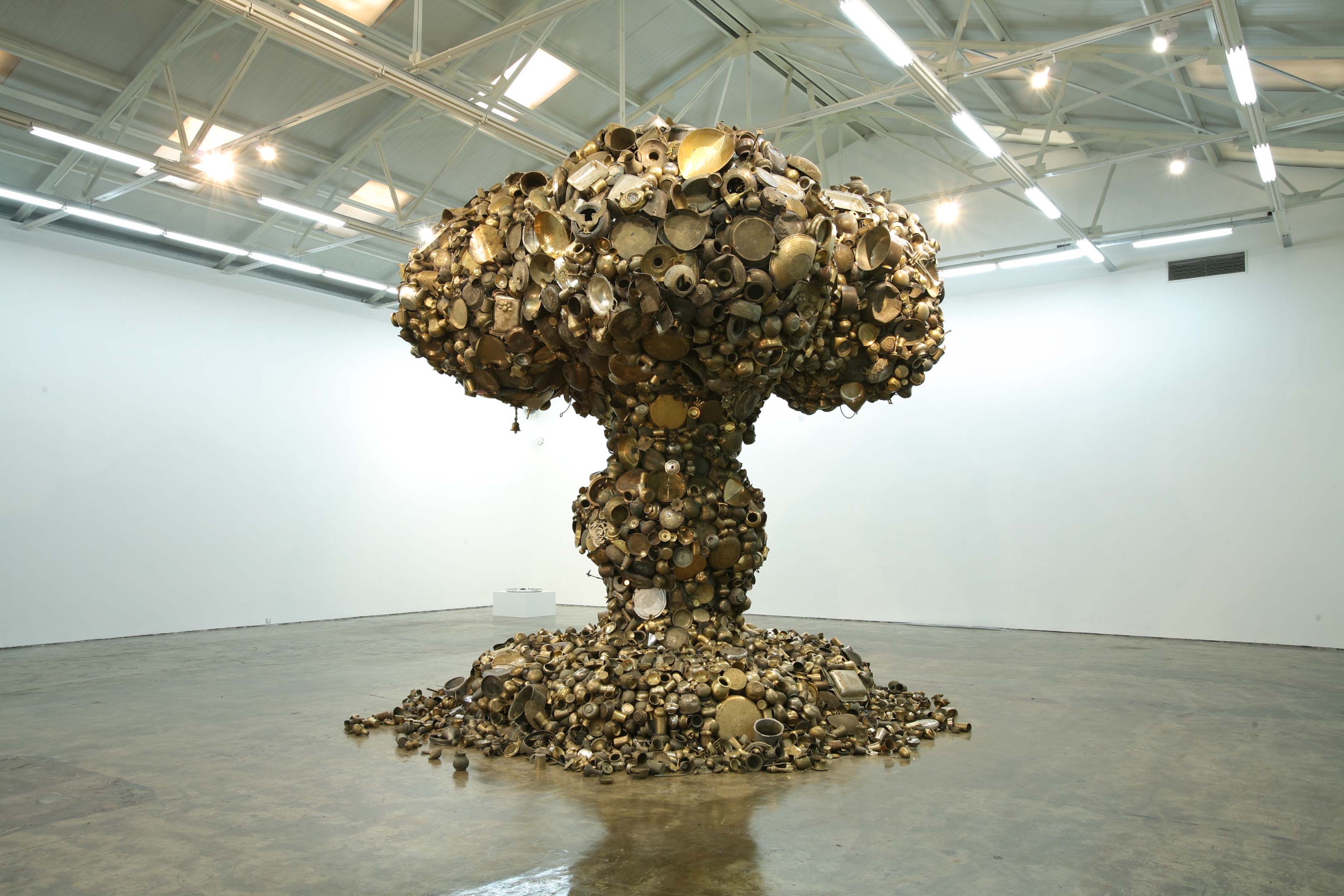 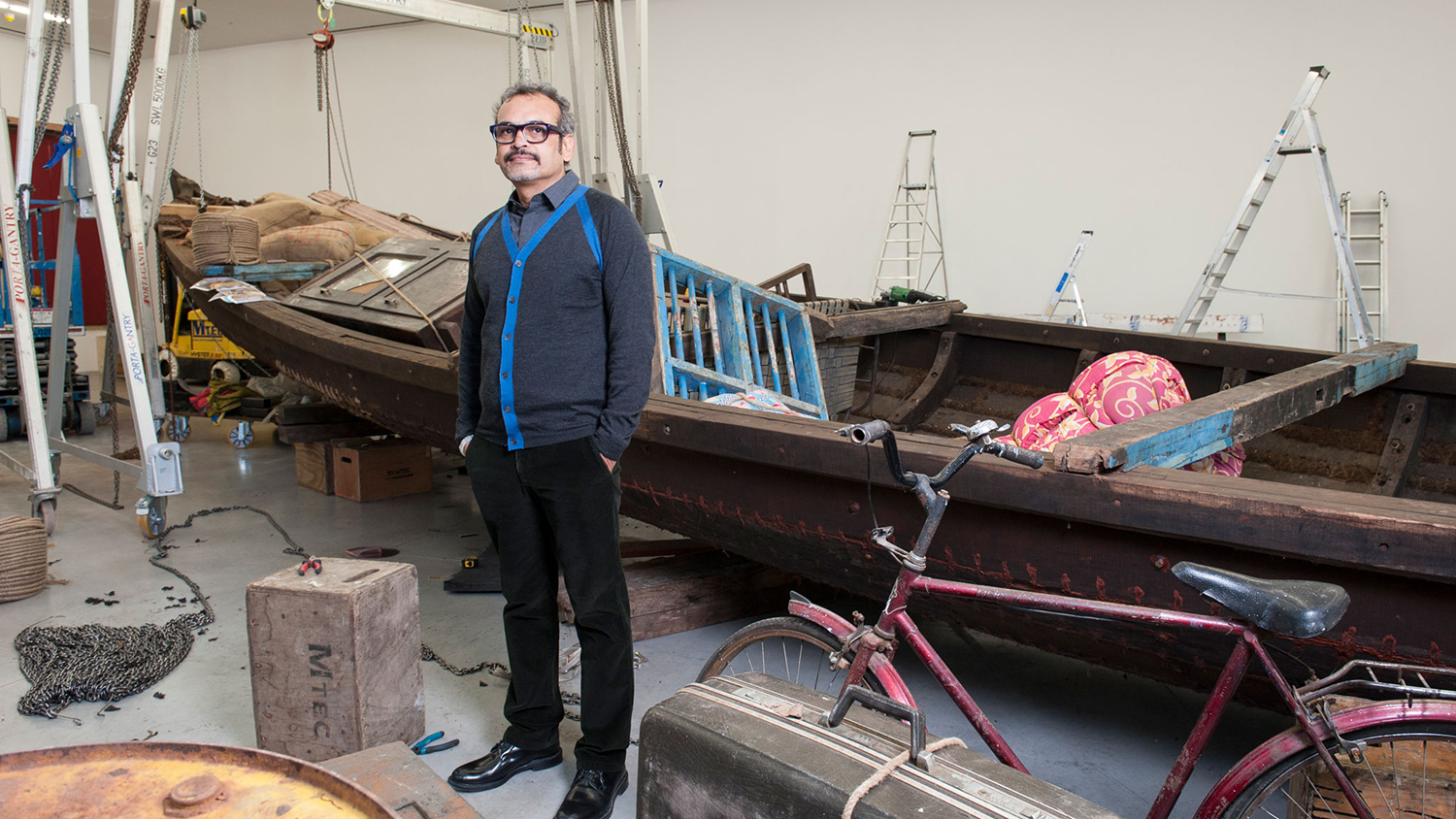 Subodh Gupta in the process of installing “What does the vessel contain, that the river does not” at Hauser & Wirth in London

Subodh Gupta was born in the eastern part of India, in Khagaul, in the district of Patna in the federated state of Bihar, one of the least developed areas of the country where almost half of the population lives in absolute poverty. The railway cuts the small town of Khagaul into two parts, each of them is rich with evidence of Hindu temples. The Gupta family is also Hindu. In India the train is the main means of transportation, among the one billion and three hundred million inhabitants, despite of crazy traffic jams in urban areas, in percentage just a small amount of people uses the car for traveling. Subodh’s father worked for the railways, this strongly influenced the boy’s childhood, so much that he was given the nickname “Railway boy”. Trains going back and forth always crowded people. In the artist’s memories there are railway platforms covered by a jigsaw made of luggage tied with laces, suitcases, bags of any shape and color, carried on shoulders, loaded on carts, left everywhere, as well as passengers standing, sitting and lying on the ground. People everywhere, waiting for the train to arrive. 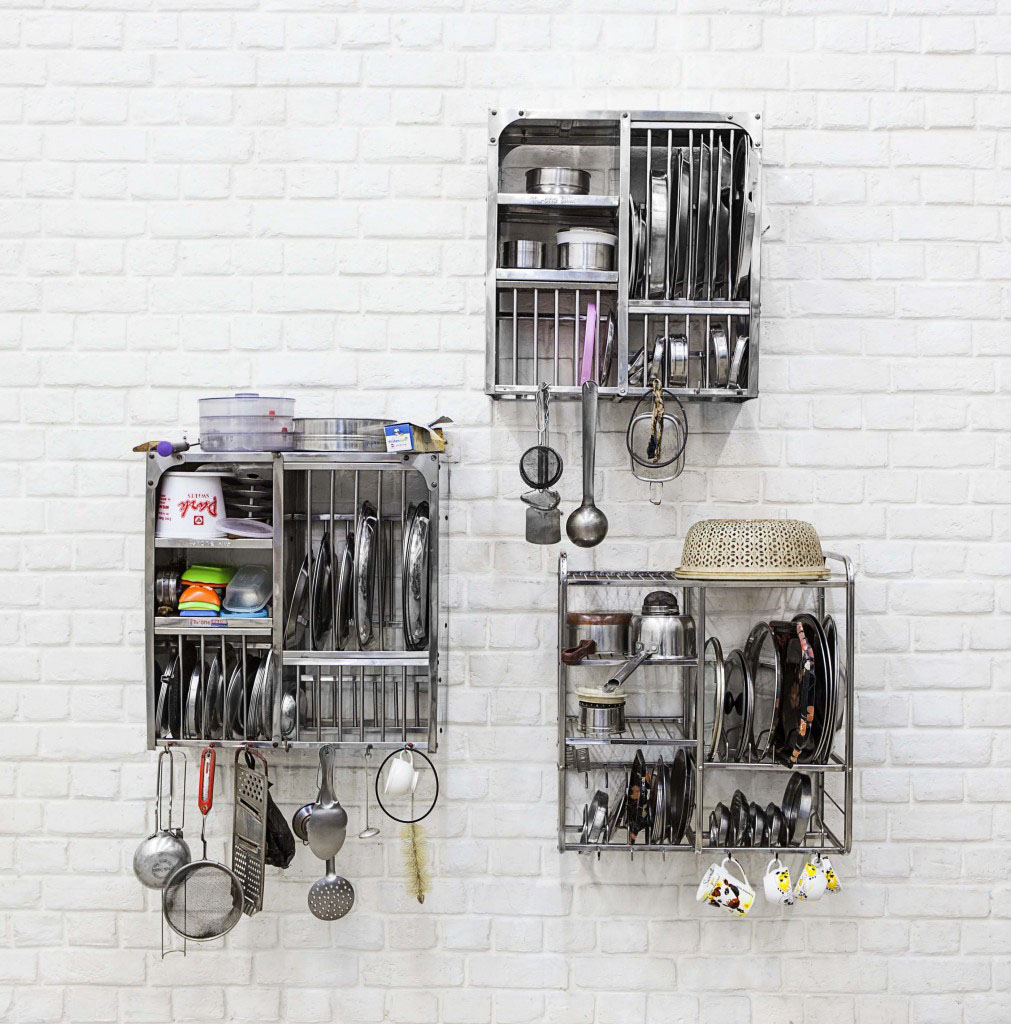 This image of the vibrant and colorful world of the railway will find its place in the photographic, painted and sculptural works of Gupta. His mother took him by train to his drama class when, enthusiastically, the very young Subodh dreamed of becoming an actor. Being an actor in a country where the “Bollywood” of Mumbai produces more than a thousand films every year is a legitimate dream. But at some point the desire for freedom, to act as director of himself took over, pushing him down the road of becoming an artist. In search for freedom and for a more dynamic life he moved to the capital, New Delhi, an immense and chaotic city where many artists live, but only a few privileged ones can afford to own a big studio for their work. Gupta’s artistic career started with painting but, as a result of his wife’s criticism, he decided to change discipline and become a sculptor. Today his talent ranges from various genres: performance, photography, installation, sculpture and painting. He is now famous all over the world for his large compositions made with kitchen hardware. Pots and pans, teapots and plates made of stainless steel and gold-plated brass have become his recognizable trademark. To create his monumental sculptures he uses various kitchen tools, chosen in shops and markets, rummaging in mounts of waste in order to pick up an object (sometimes even broken) that strikes him for a reason that’s clear only to his artistic vision. The works of Gupta are always very aesthetically pleasing, all the metal components are polished to perfection until they become shiny, giving the illusion of the use of precious materials, thus acquiring added value. 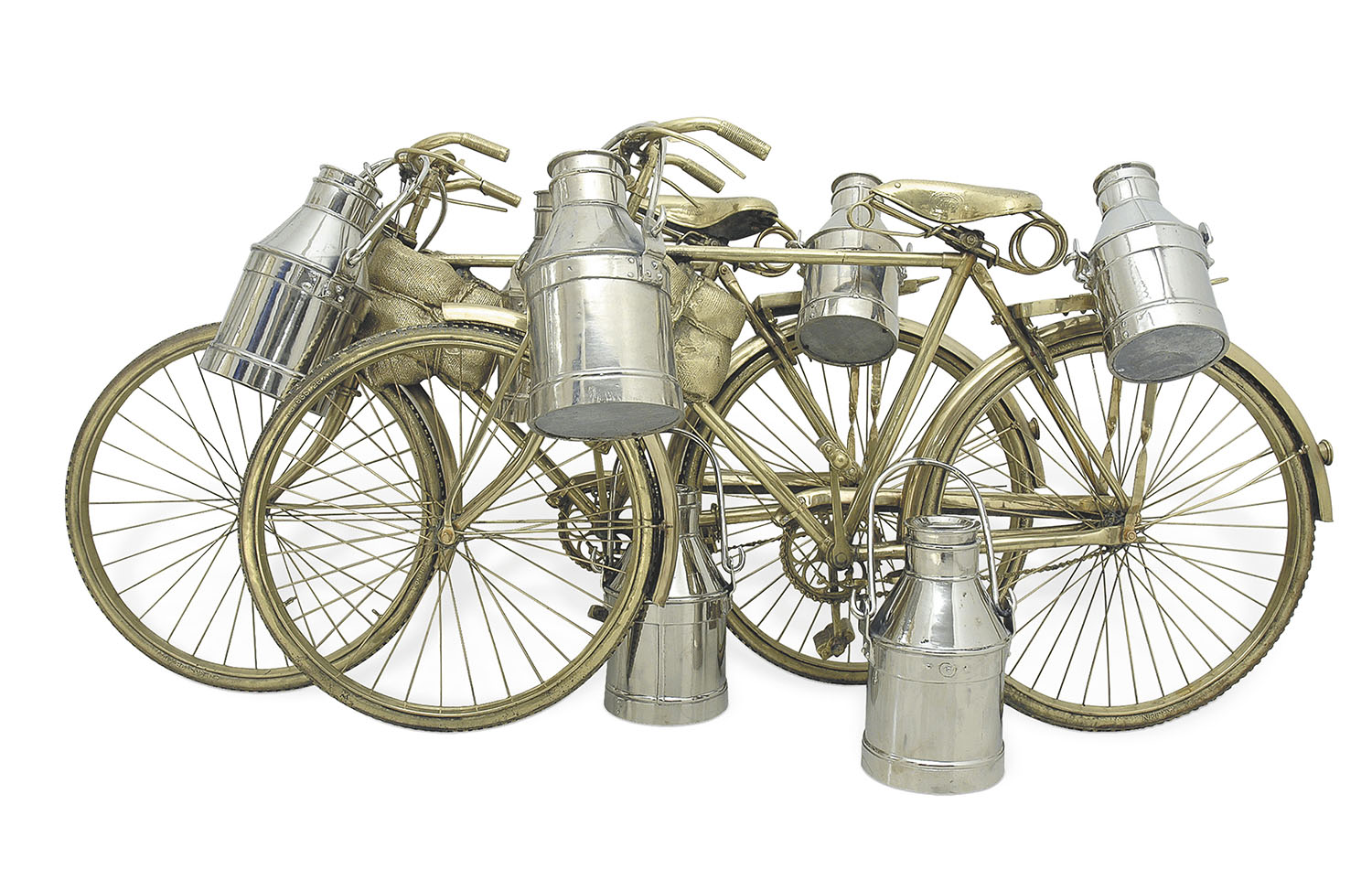 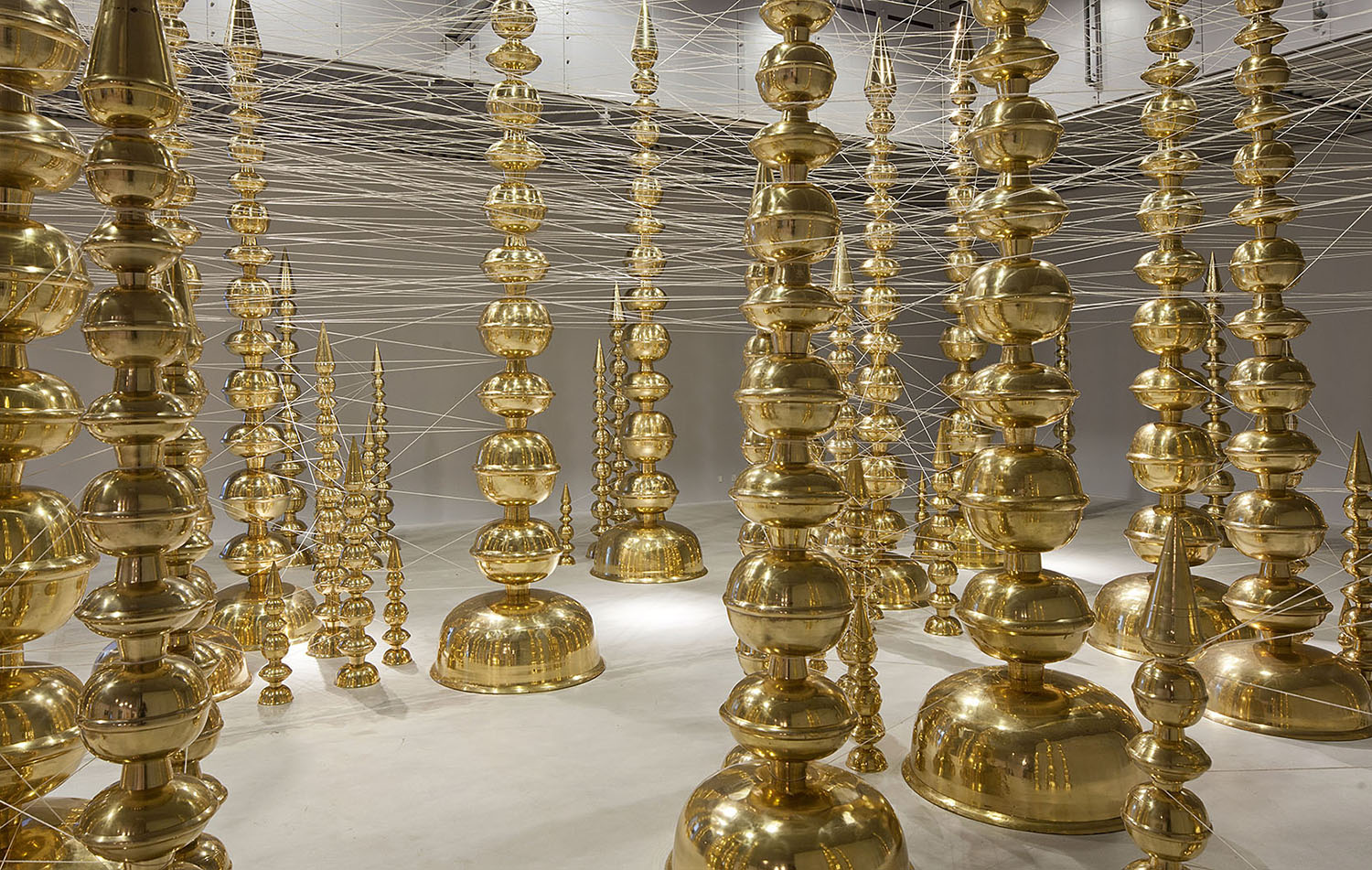 Gupta on the one hand explores the spiritual world and the daily life of modern India, on the other he remains anchored to a traditional country. His art is contemporary and classic at the same time and its aim is not to deny the past, but on the contrary he tries to link the world of today to the traditions of yesterday, the day before, and a thousand years ago. He finds reasons to collect objects of everyday life, kitchen utensils which have always been the center of life for every Indian family. For example the shape of the pan has not changed at all during time, in the museum of ancient art we can find the ancestors of today’s kitchenware. Every Indian family, rich or poor, recognizes these objects: the art of sculptor Subodh Gupta is popular in the strict sense of the word “people”. Sometimes Gupta compares opposing worlds: the rich and the poor, always pairing everyday objects (like two entrance doors, two projectors, two toilets, two toilet flushes) changing only the finishing of materials they are made of, for instance gold plating for the first, wood or iron for the other. The message consists in the existential truth, which always remains the same: the door serves to enter and the toilet serves basic needs. Despite the economic conditions people are the same, everything else is just an ephemeral and temporary coating. The art of Gupta could have been considered “social” if it included a sentiment of rebellion, instead the artist channels our thoughts into a philosophical feeling, close to the oriental spirit, sometimes a bit ironic, but always calm and rather complacent. 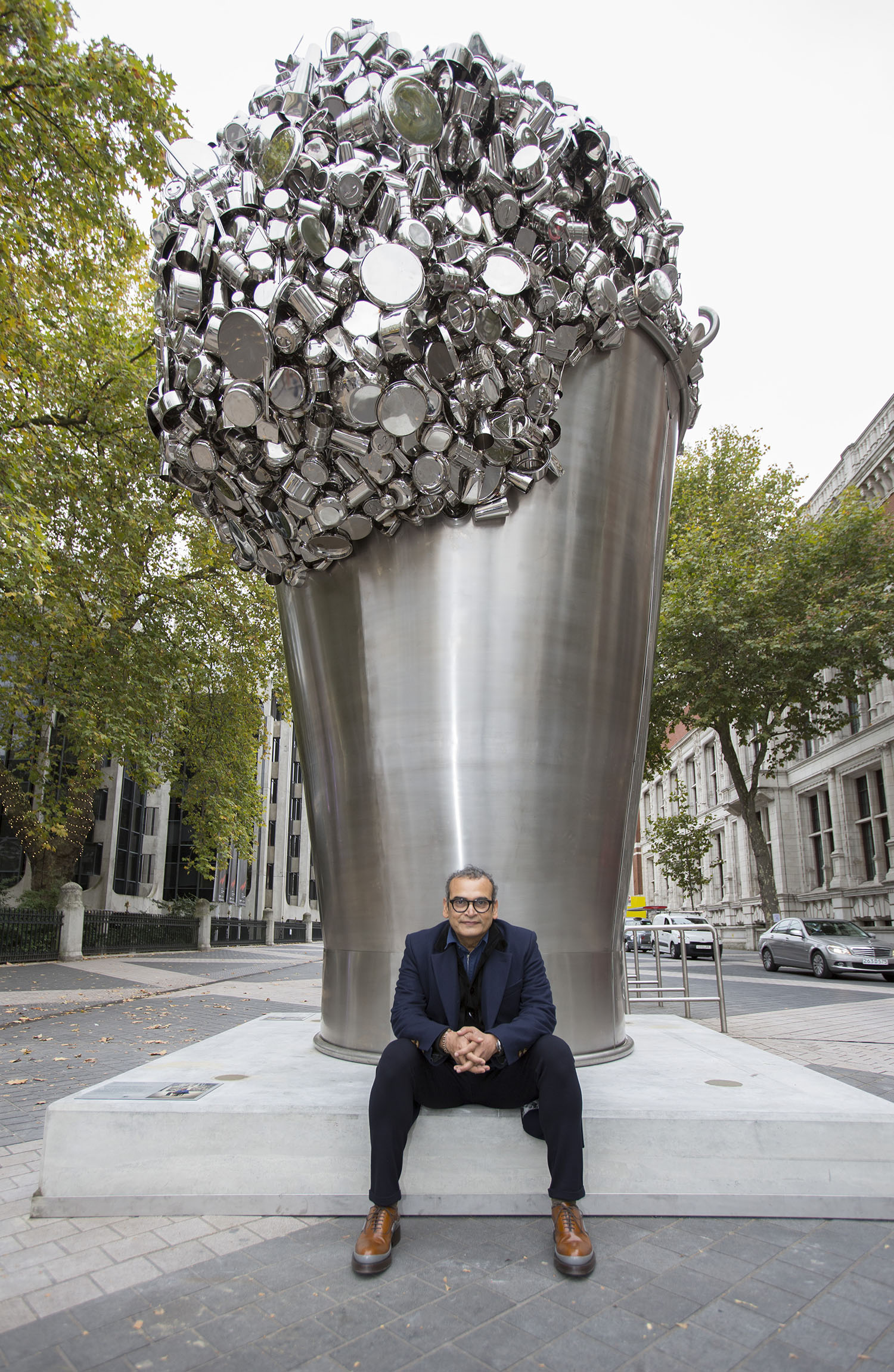 What does Subodh Gupta like? He likes his India which has become an economic giant, its very large population, which manages to keep alive its ancient traditions and rituals, passing them down through the centuries, the goodness and variety of Indian cuisine, the importance of family values that are the pivotal point of the life of every individual, the aesthetics of the forms of traditional Indian art, and overall of the grandeur of its cultural background. 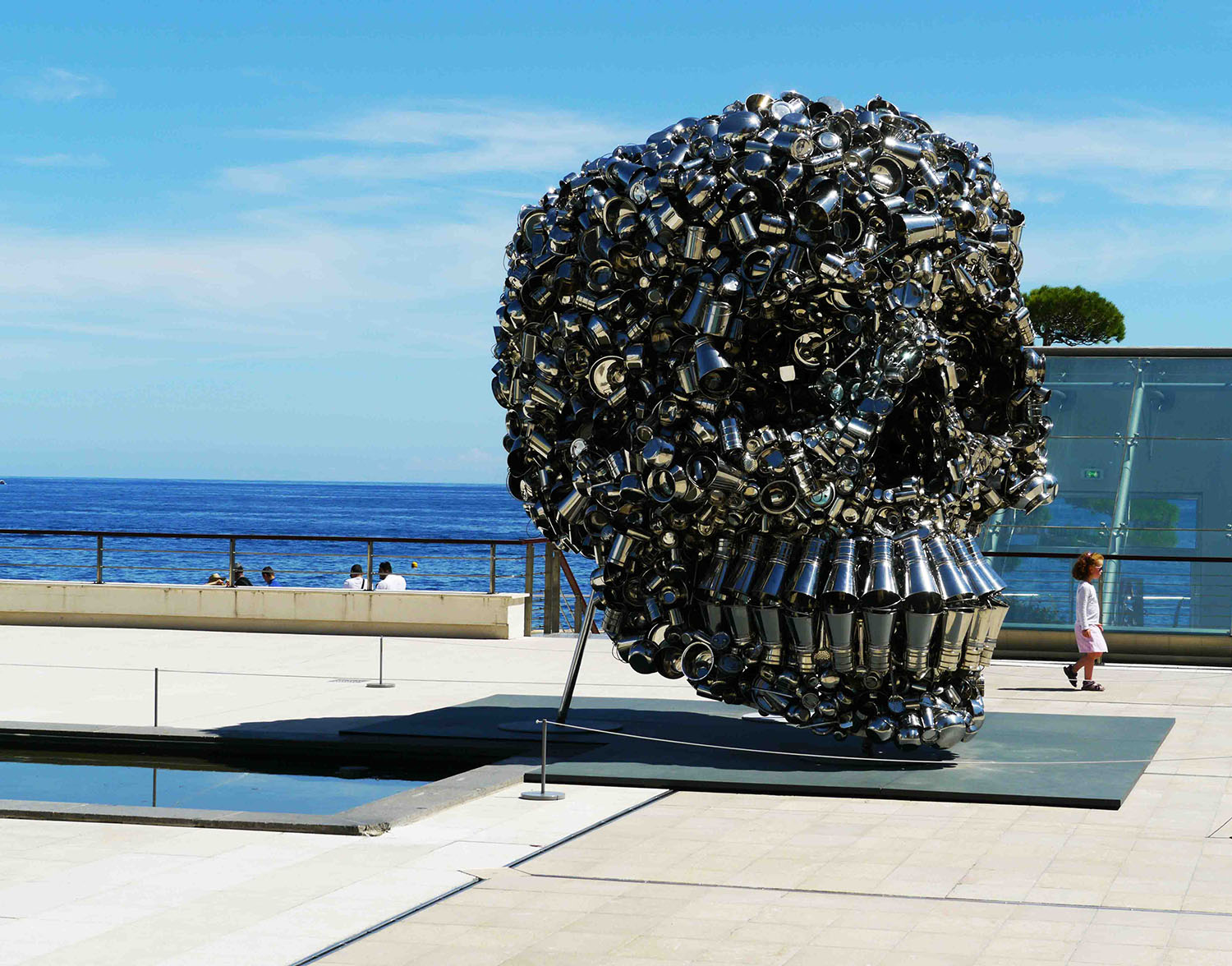 Gupta challenges the “sacred idols” of contemporary art: he molds an elegant sculpture of the Madonna with an adorable mustache recalling Marcel Duchamp, composes a huge skull with kitchen utensils, winking at Damien Hirst. But if his counterparts are the “hooligans” of art, driven by the desire to shock and shake the brain of the viewer, Gupta caresses his gaze instead, reassuring him with the thought that the contemporary world is not madly crazy because it is well anchored to good reasons and good examples. Gupta also drags us to the world of dreams, his own and a common one, invites us in his Bollywood films where poor and rich people live together in a world of fantasy, almost heaven like. The huge sculptures of Gupta are so refined and beautiful that they could decorate any place. They look good in art galleries and become extra-large jewels in the open spaces, such as his “People Tree” which is displayed in the courtyard of the Monnaie de Paris. A tree with many roots (ancient traditions), with many branches (the people of India) and a dense foliage of kitchen utensils (family values). The art of Subodh Gupta is an aesthetically elaborate and slightly “rococo”, but fresh in its composition, hymn to his old new India.