The work of Thai artist Natee Utarit (Bangkok 1970) reveals a singular attitude and a figurative language which significantly differentiate it from the artistic production in Southeast Asia today. Having studied at the Silpakorn University, founded by an Italian artist of the Florentine academic school, Utarit, like the Thai artists of his generation, learns a formal foreign language (local academic education provides the teaching of  European art history), which is also a vehicle for a different cultural heritage, in this case the Western Christian one. Together with the traditional style and genres of European painting (historical painting, portrait, landscape, still life), the artist also learns the meaning of the religious symbols and icons of the Reneissance and begins to question the themes and characters they represent, focusing in particular on the similarities between western and Thai-Buddhist imagery. 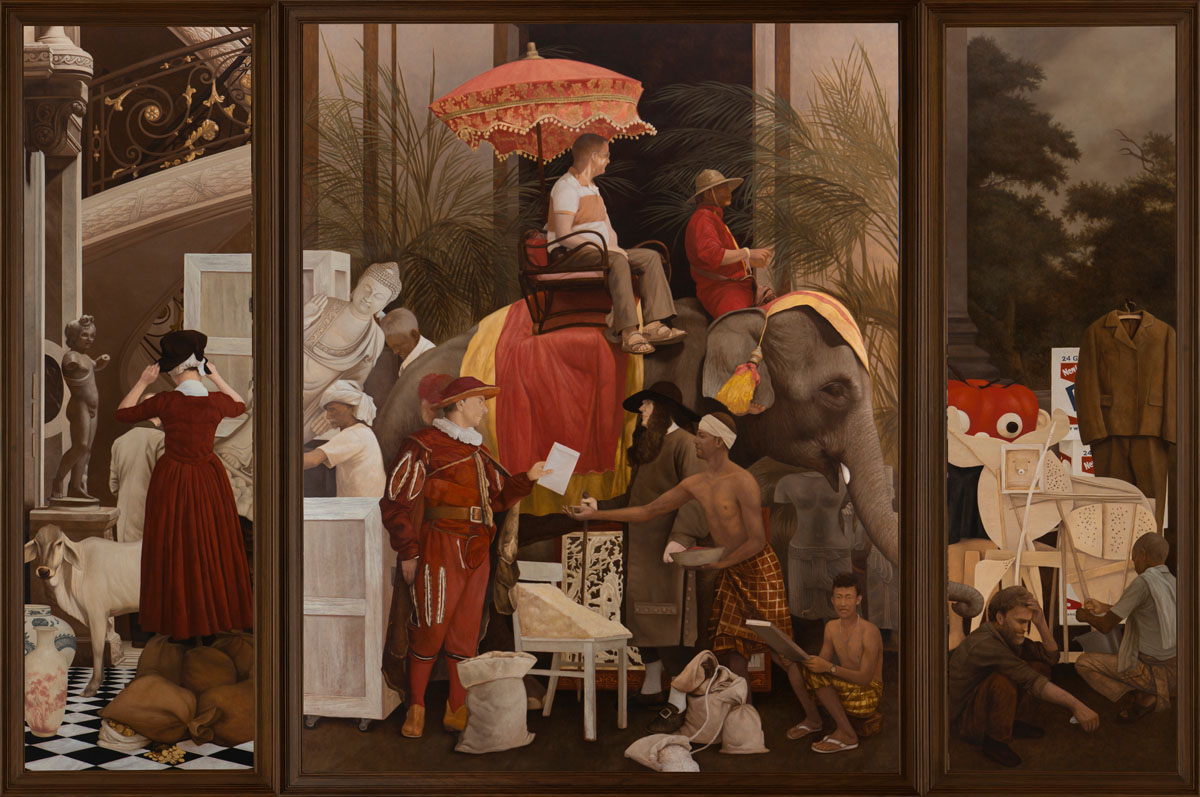 From this comparison the artist generates his stylistic code: the search for a native identity and voice within the foreign styles learned (imposed) by the colonizers. Utarit’s visual stories are complex and unexpected allegories, they are born from the combination of various elements. Ancient and modern objects, iconographies of the Christian and Buddhist tradition, historical and contemporary figures, Western and Asian, are combined in impeccable and perfectly balanced compositions, which give life to new scenes and to an artistic formula which is at the same time very personal and astonishing. 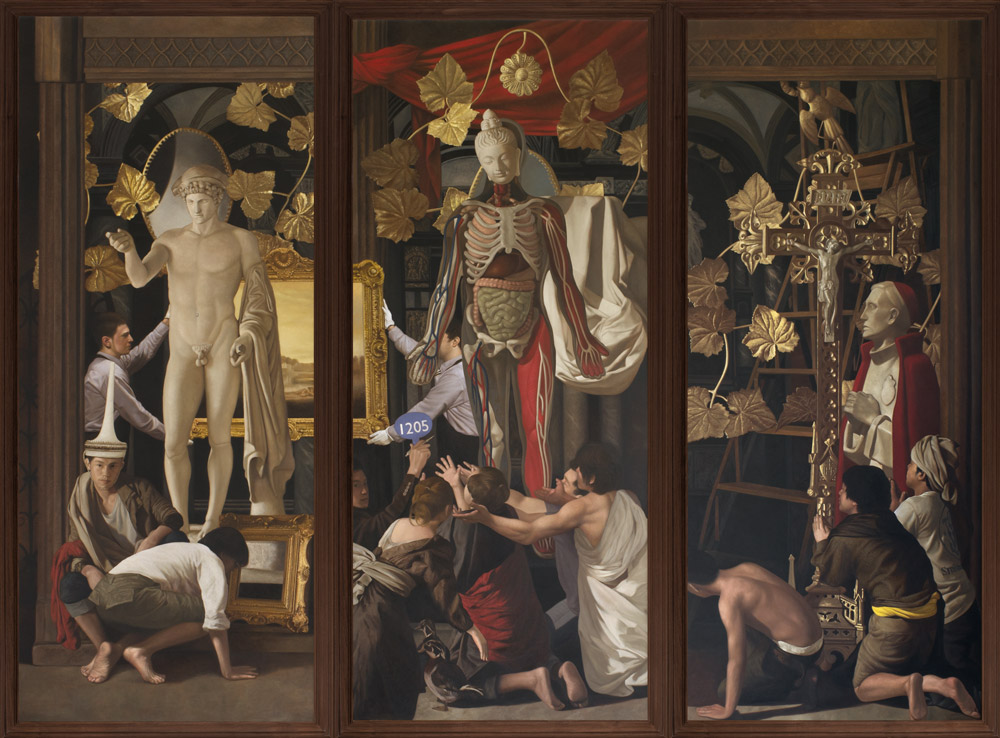 Utarit, however, is a “virtuoso” of the style more than of the content: under the skillful artistry of the Thai painter lies a world full of current themes and it’s up to the viewer to choose whether to decipher them or not. The pictorial surface is captivating, with its colors, smooth brushstrokes, infinitesimal details and the splendor of its forms, catalyzing attention to the point of being ineluctably distracting. Only a motion of awareness in the viewer can lead him back to the traces of the underlying meaning, which in Utarit constitutes precisely the soul of the painting. The artist takes strong, decisive positions that unfold moment by moment in the pictorial pieces he produces. He talks about the human condition, about the ethical drama which is related to the collapse of certainties. 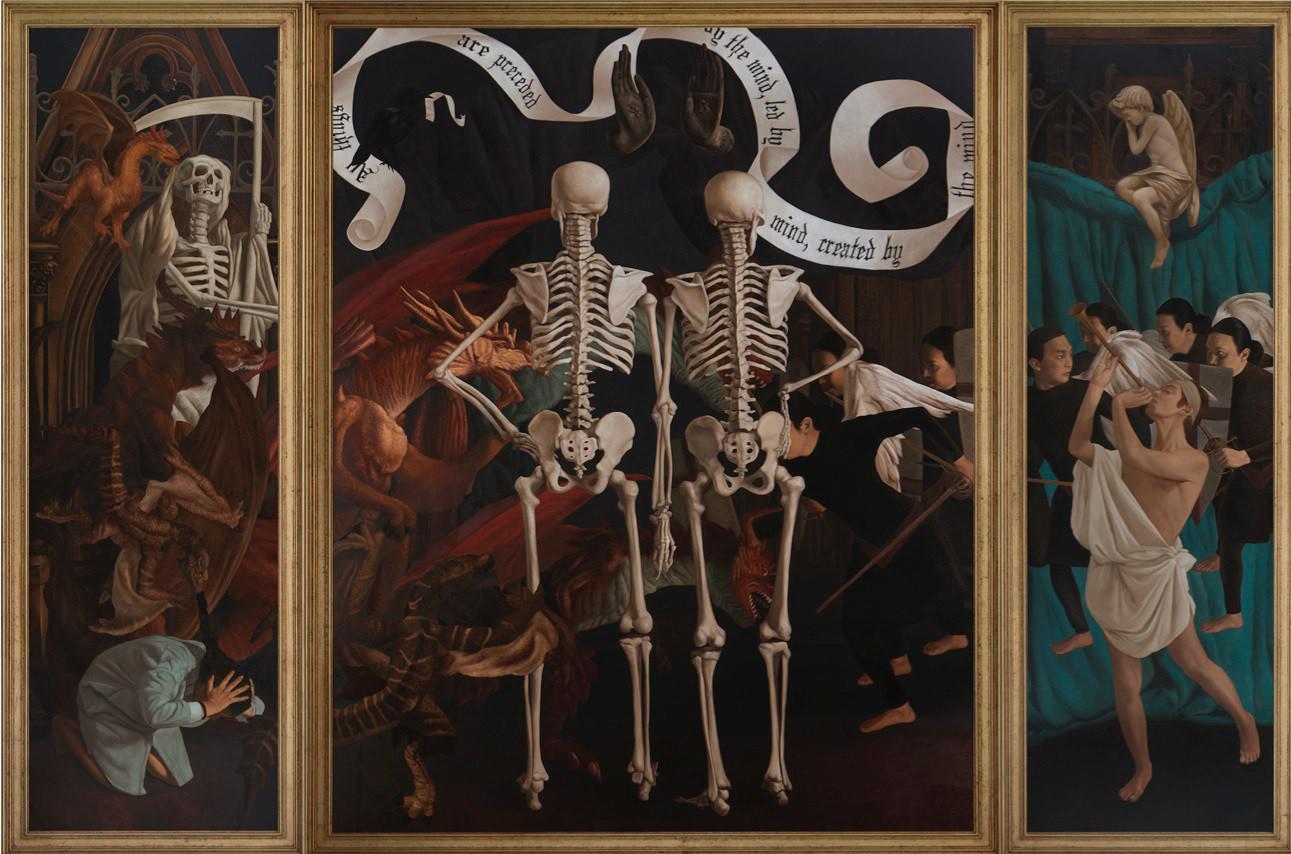 The artist expresses his personal opinion on the existence, on God, goodness, greed and caducity. He criticizes contemporary society and stages its cultural crisis, in particular the crisis of Thai society (Illustration of the Crisis, 2010, series), but also of the contemporary art system (Altarpieces, 2014-2016, series). Taken from this latter series, the painting When Adam Delved and Eve Span, Who Was Then the Gentleman ? 2014, constitutes an exemplary model of the artist’s aesthetics and ethics. Eva appears huddled near what should be a spinning wheel (but that subtly recalls the wheel of Duchamp, leader of Western conceptualism) and the poverty of her and Adam strongly contrasts with the sumptuousness of the garments worn by the central characters, two men of obvious Caucasian origin, surrounded by symbols of western cultural and artistic tradition. 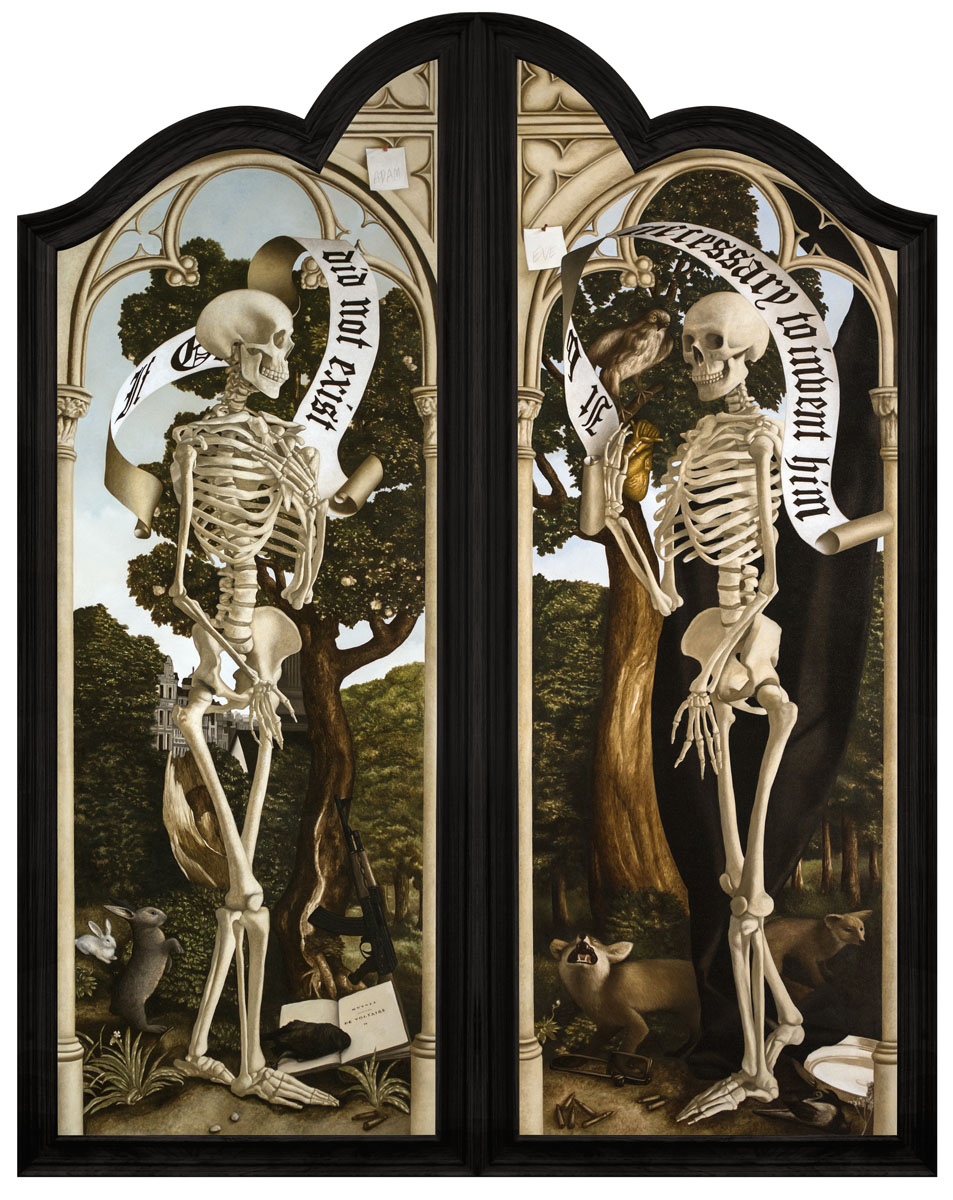 Natee Utarit, Allegory of the Beginning and Acceptance, 2015

One of the two characters holds a map of Southeast Asia while a dark-skinned and Asian-like  dwarf plays an accordion. Here the splendid and “error-free” painting of Utarit aspires to unmask the cultural yoke that still affects Southeast Asia today, which is represented as a court Jester whose mere function is to delight the West. The words that give the title to the work therefore seem very accurate, they are taken from a famous sermon by the priest John Ball, inspiring personality of the English peasant revolt of 1381, which underline the condition of freedom and purity proper to Adam and Eve, when there weren’t servants nor masters, when God gave mankind free will and, with it, the equal right to exist. Since Ball is a wandering priest, and therefore outside the canonical religious system, the artist pushes his message even further: he proposes a parallel between the organized religion of that time and the art system of today, which reveals itself as a harbinger of hierarchies, unfair relations and unjust arbitrariness. What Utarit seems to ask to his viewer, through the use of cultured and stratified works in which the plurality of references  look as a compositional rule, is, in the end, the time to deepen the knowledge of the different existing cultural realities, inside and outside his polyptychs.