It reminds us of the good old cinema, when we entered the hall, we sat on the armchair and a few minutes later we held our breath waiting for the sacred ritual of immersion into the fantasy world: a cone of light that, passing over the heads of the audience, ran onto the white screen shattering in many small dots of shining dust that suddenly came to life and transformed into the frames of the film. Not only the light in the cinema had something mystical, but so did any source of light that appeared to human eyes over the millennia. The sunlight that gave life to all living beings, illuminated and revealed was considered the concentrate of the divine, later it was imitated by the warm light of the candle flame, followed by the incandescent lamp and after that by the cold neon light. Like any imitation it lost some impact and some of the primary force of the original, artificial light was a pale model of solar electromagnetic waves, but something inexplicably mysterious remained the same and even the photons of artificial light had their own power both rational and irrational. 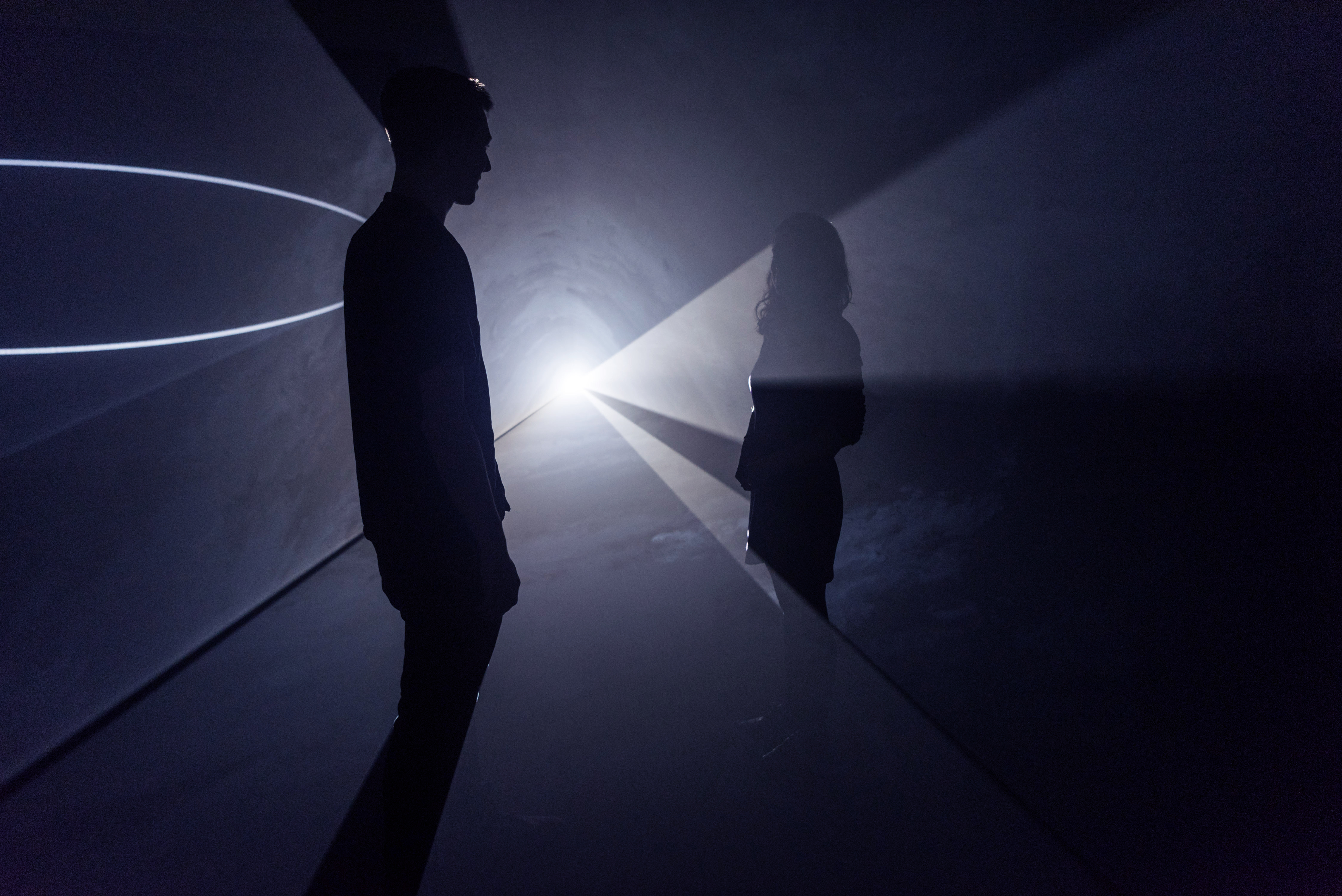 Visitors look at Face to Face (2013) Anthony McCall at The Hepworth Wakefield. Photo by Darren O’Brien/Guzelian

Nature and the physics of light fascinated the greatest minds in history from Galileo to Newton and, in more recent times, came the abstract experimentation by Laslo Moholy-Nagy and that of Man Ray with his negative photographic prints exposed to “solarization”.  Impressionist art has also attempted to imitate the effects of light with the application of artistic means of expression without the use of an emitting source, we can see the great allusive impact in the paintings by Monet and Renoir. The intention to find the plastic use of light is instead highlighted in the works of Lucio Fontana and of the Twenty Cent Art Group. The theme of light manipulation has also affected the British avant-garde artist Anthony McCall since the seventies. 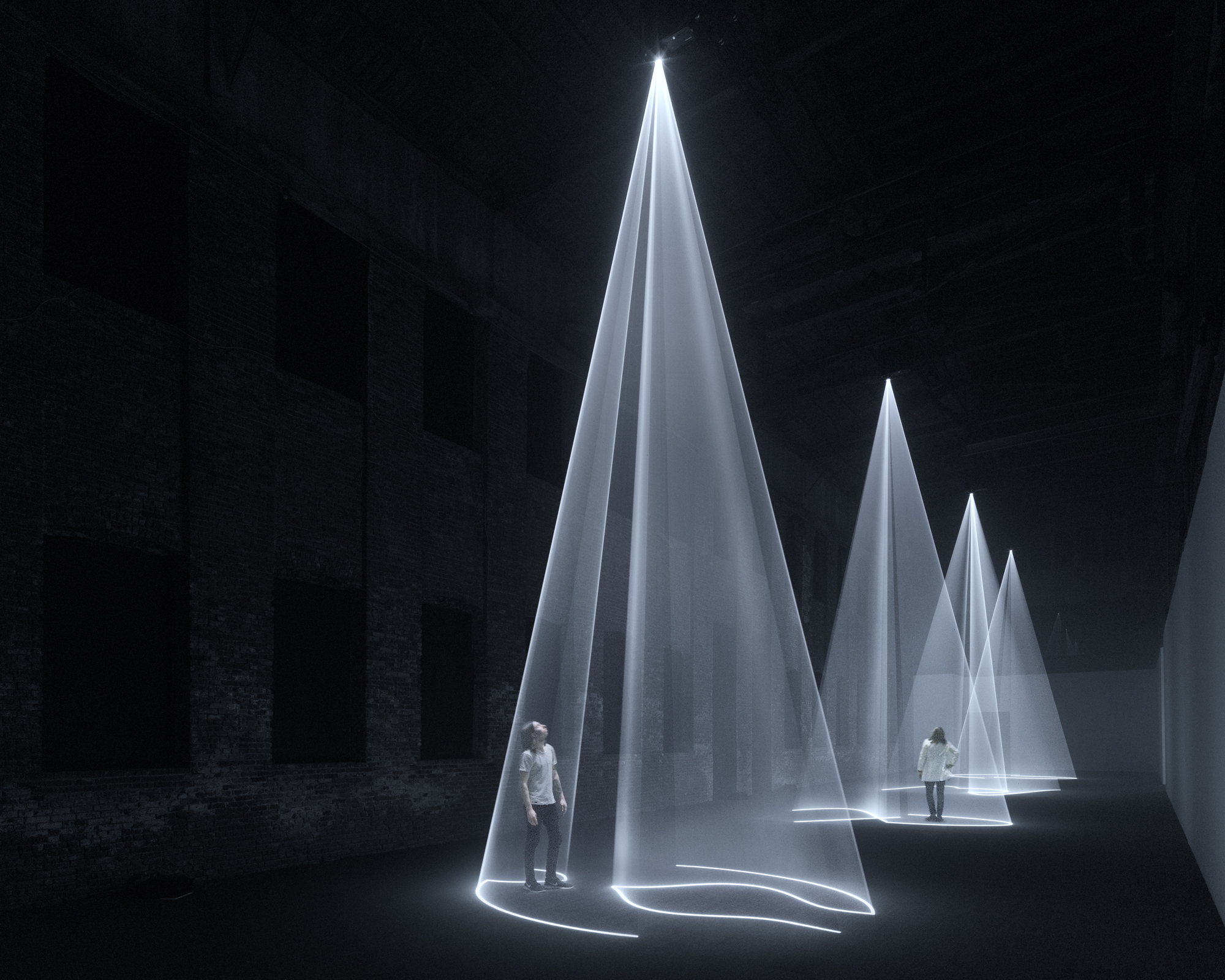 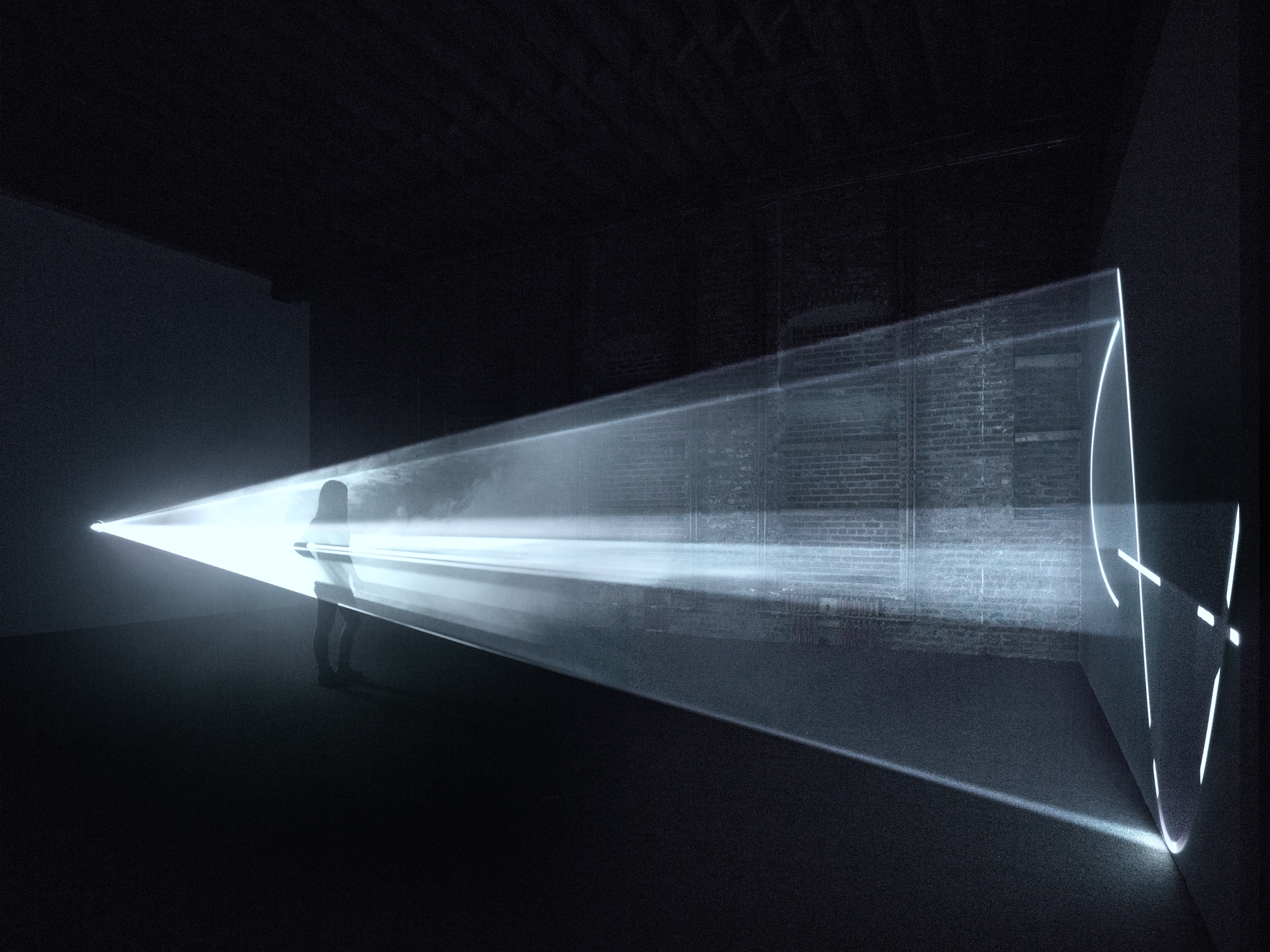 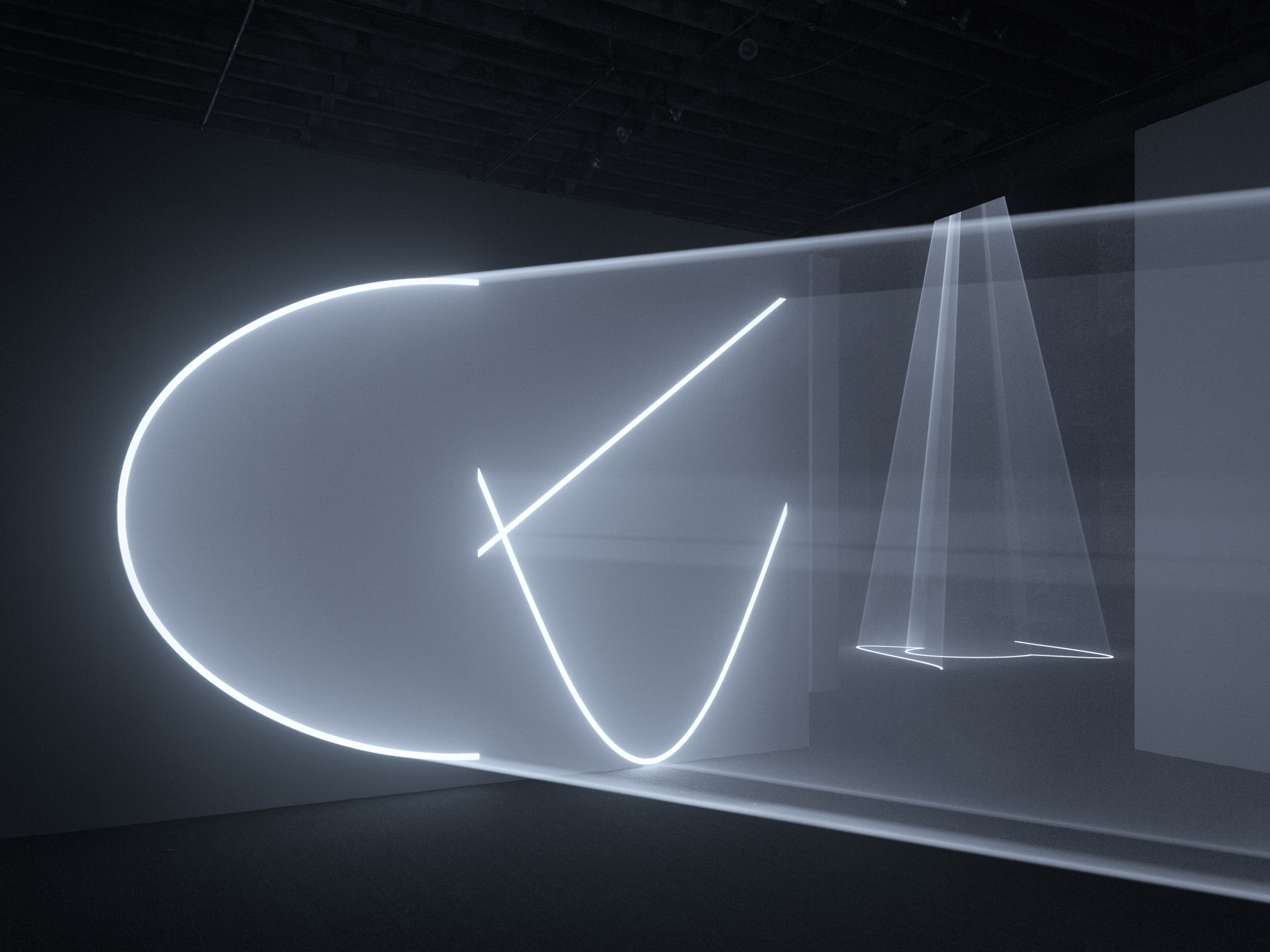 He tries to push himself forward and to construct bulky and “solid” geometric shapes with light, calling his pieces of work “Solid light”. To the question of whether one can deceive the human mind by making light rays be perceived like architectural forms, McCall responds positively. Walls and other sculptural forms, by using artificial gas and a light source, are “built” into rooms immersed in total darkness. The cone of light, like the one in the cinema, can be transformed into the ideal form of the pyramid which then obtains the necessary effect, the involvement of the public. Often unable to recognize the light source placed far on top and seeing only the vertical flux of light down to the floor, the viewers are driven to have visions similar to the mystical ones of great impact experienced in the Gothic churches, where the powerful light rays pass through the windows, cutting the dark space in a very scenographic way. 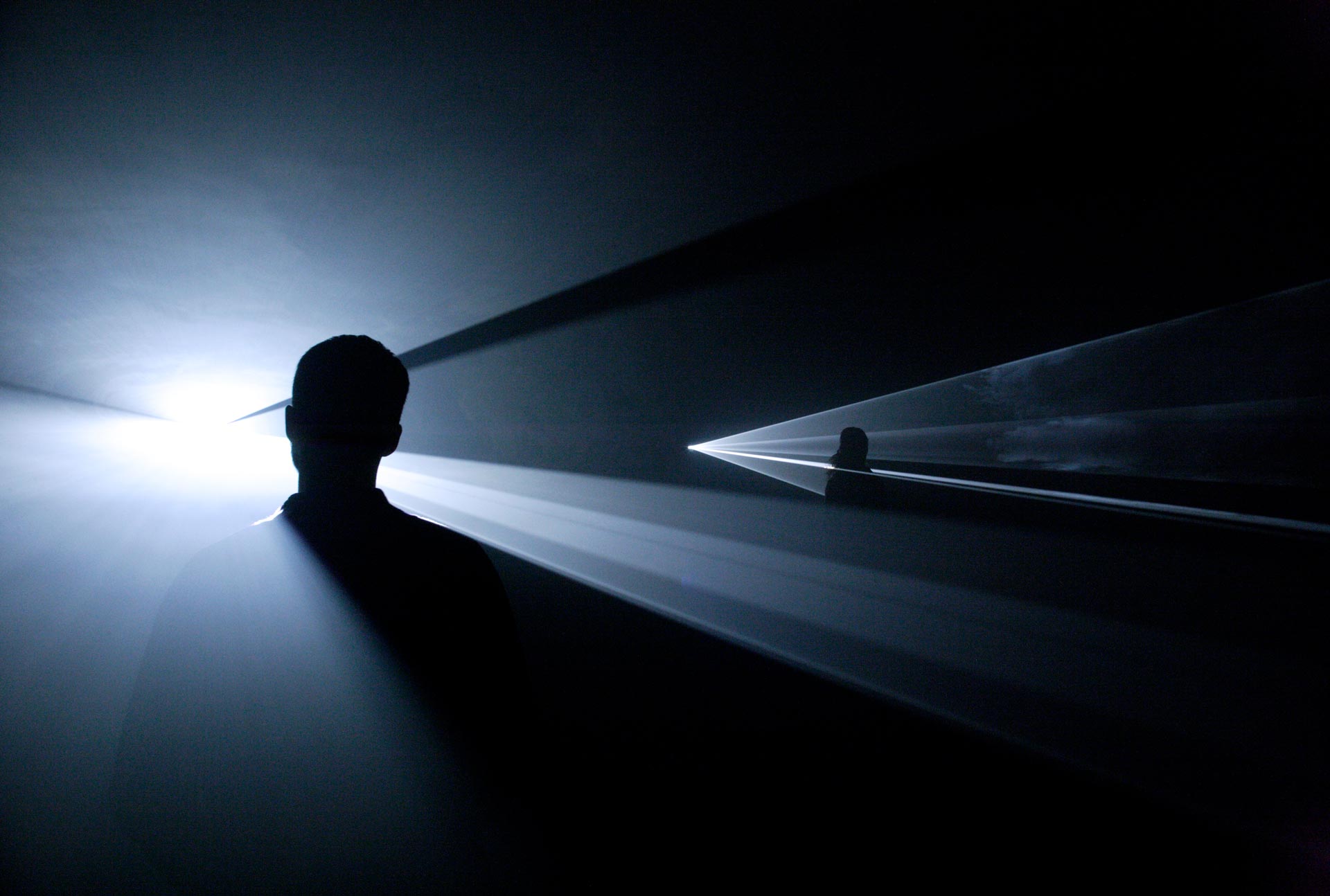 The interaction with the viewer is however played down by the playful component of Anthony McCall’s works: the desire to enter the ray of light, to move in and play with its effects on the body, minimizes the magical component and creates  interaction. The light rays in McCall’s installations draw on the floor the outlines, to which he adds artificial smoke helping to create a geometric volume of changing shape, which transmits to the viewer the intent to start a dialogue: a concept that nowadays attracts many contemporary museums.