Jake and Dinos Chapman ‘The rainbow of human kindness’ at H.e.r.o. Gallery Amsterdam

Jake and Dinos Chapman ‘The rainbow of human kindness’ at H.e.r.o. Gallery Amsterdam

Are we stuck in a vicious cycle of affirming our liberal advantages by tolerating the suffering of others? According to Jake and Dinos Chapman solo exhibition at Amsterdam’s Hero Gallery we definitely are. The title of the exhibition, ‘the endless rainbow of human kindness’ seems to be a sarcastic critique of prescribed universal optimism. The artists present a world in which kindness and solidarity conceal an immeasurable capacity for malevolence. This firstly confront us with the darkness beneath our own public personas but even more so with our uncanny ability to be entertained by the suffering of others if it is located outside the boundaries of our personal affairs. 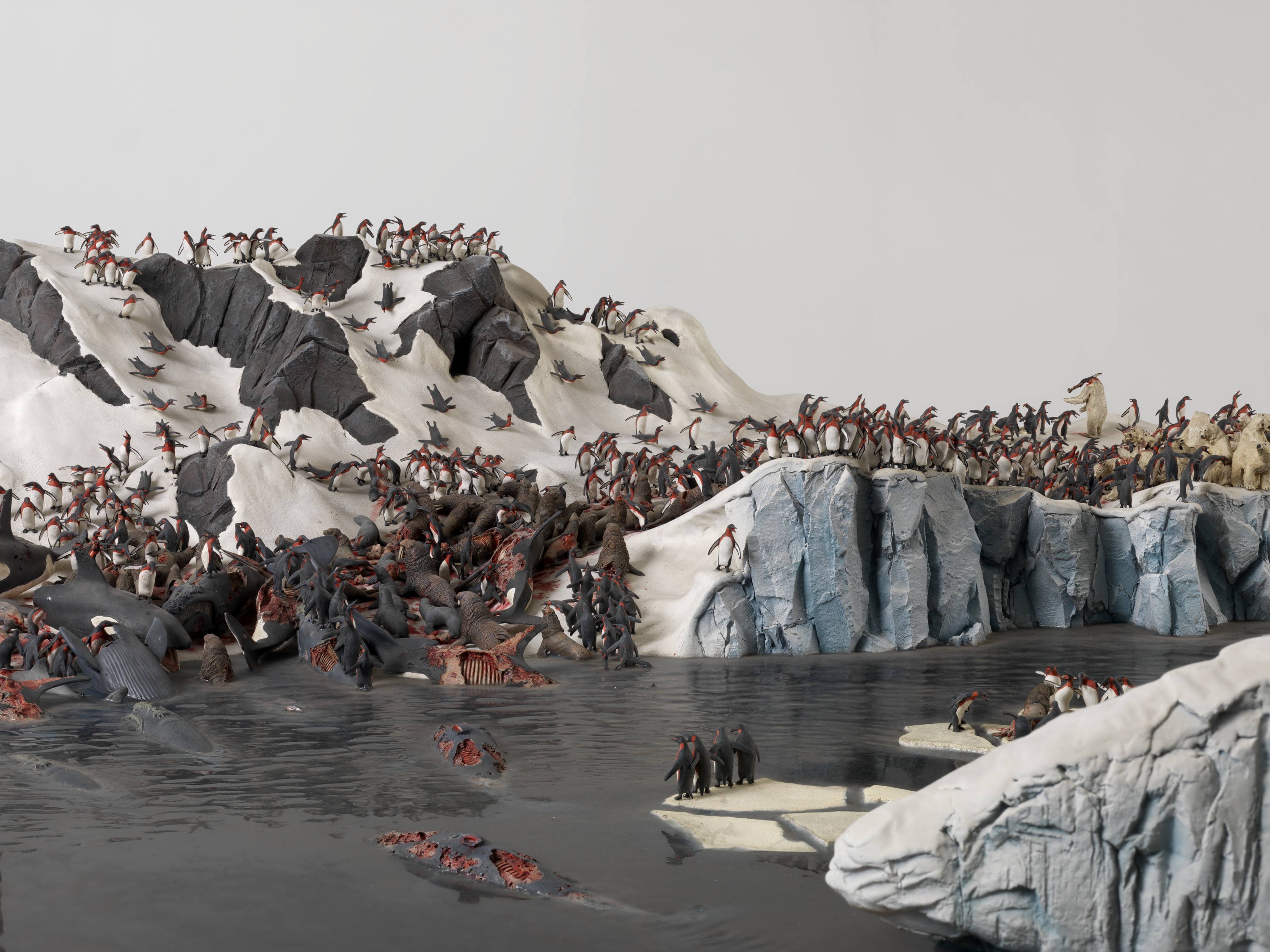 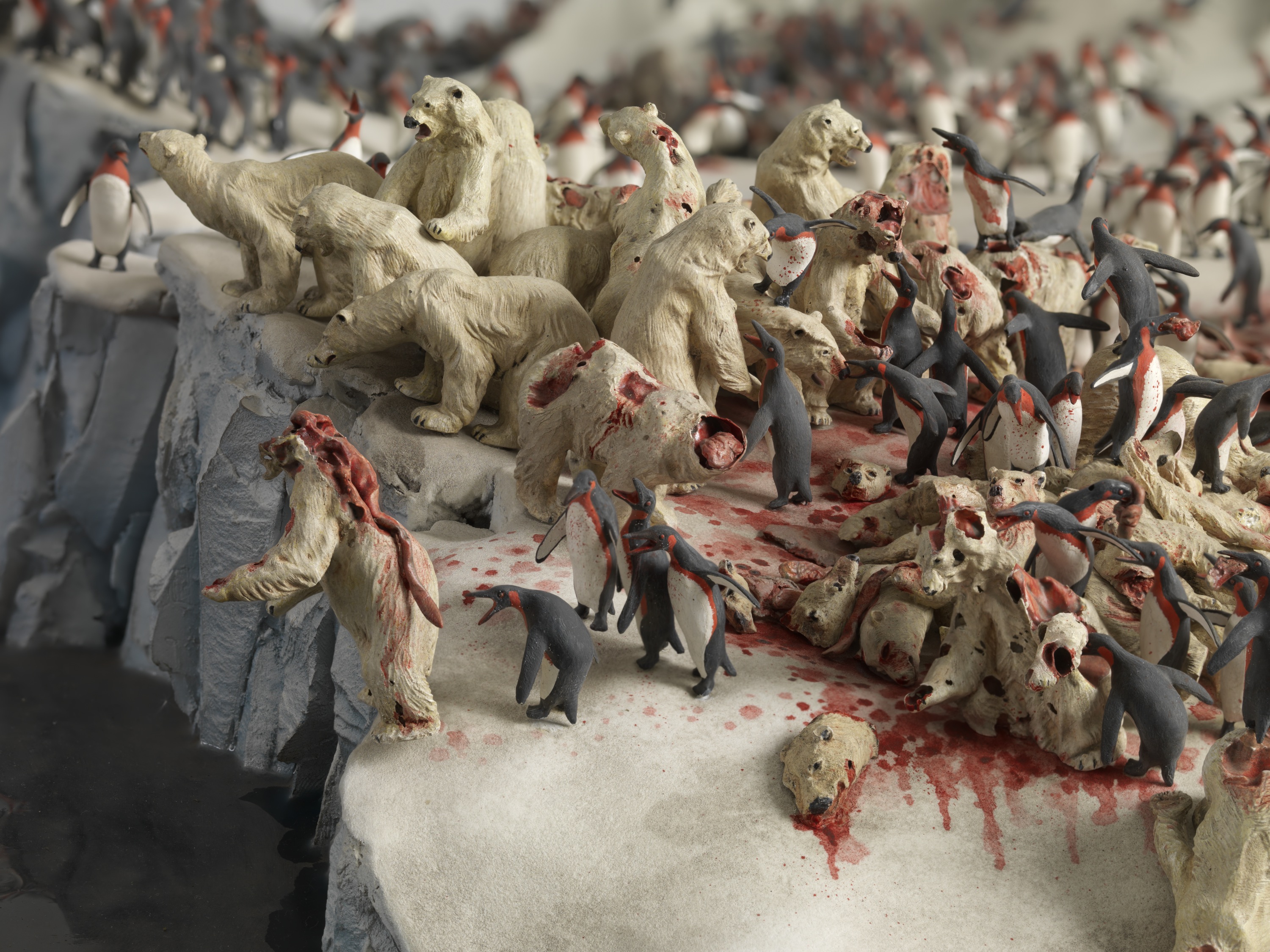 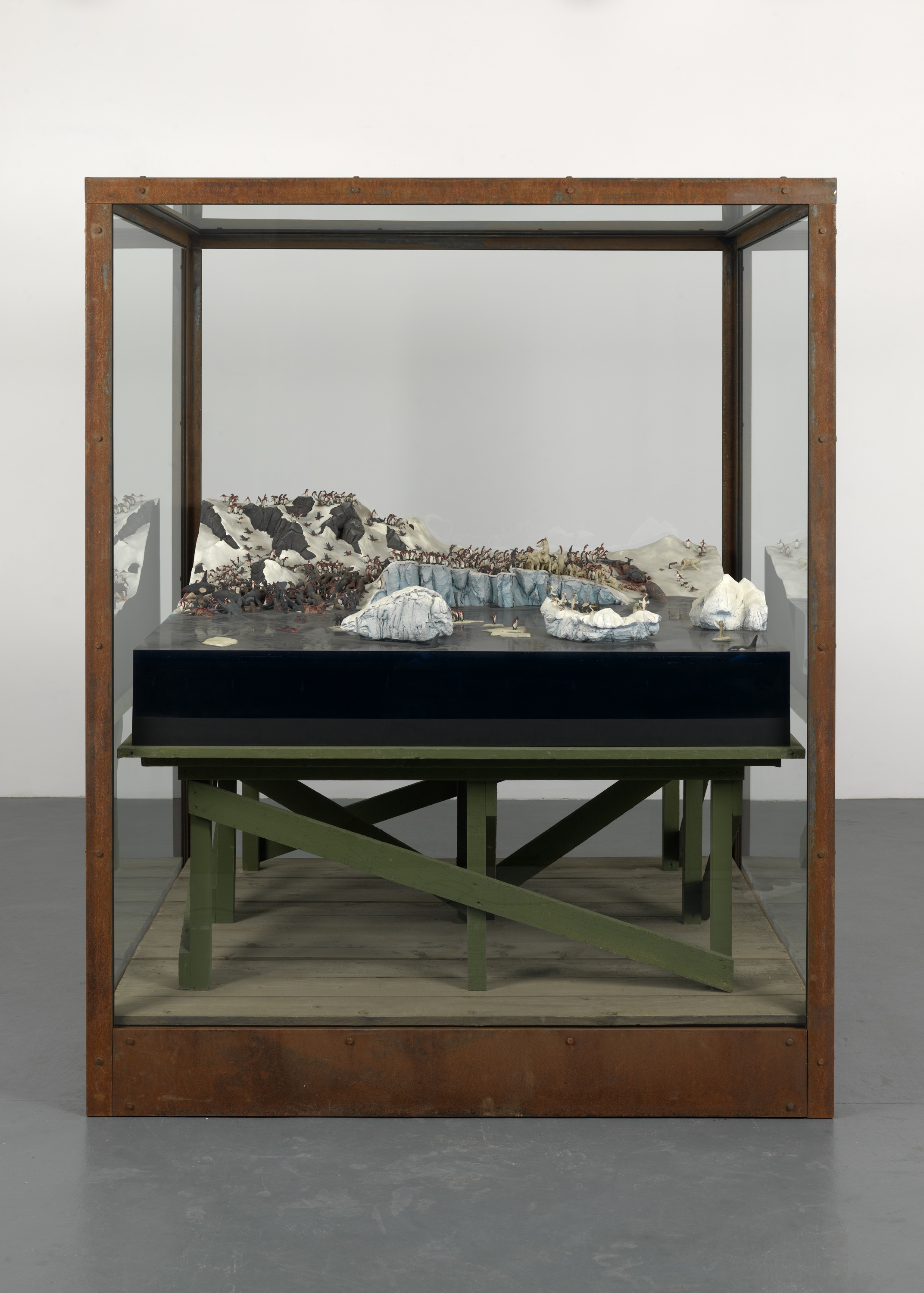 Jake and Dinos Chapman do seem more than happy to provide their audience with entertainment value. Their ‘Hellscapes’, of which several versions are on display in this exhibition, are so detailed and carefully constructed that it would be hard for someone to contemplate the violence without astonishment. This is precisely where the artists throw our moral framework off balance and question the necessity for a moral imperative within an artwork. The ‘Hellscapes’ prove that artworks can have a sublime dimension that enables us to experience something beyond a binary judgment of good and evil. 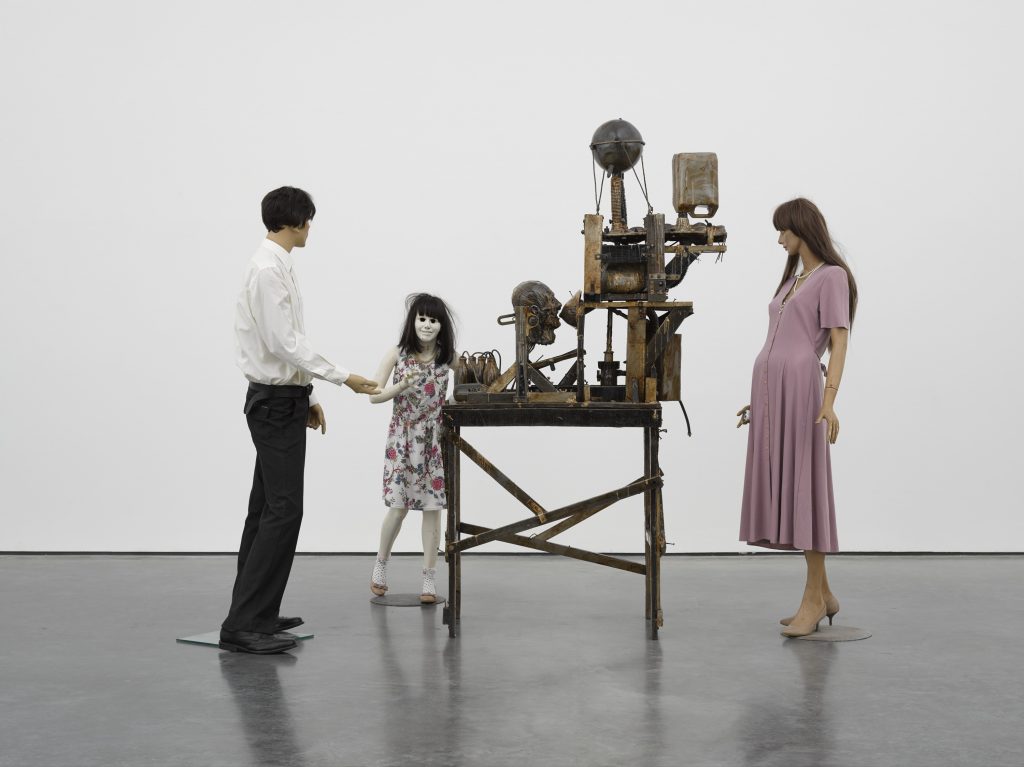 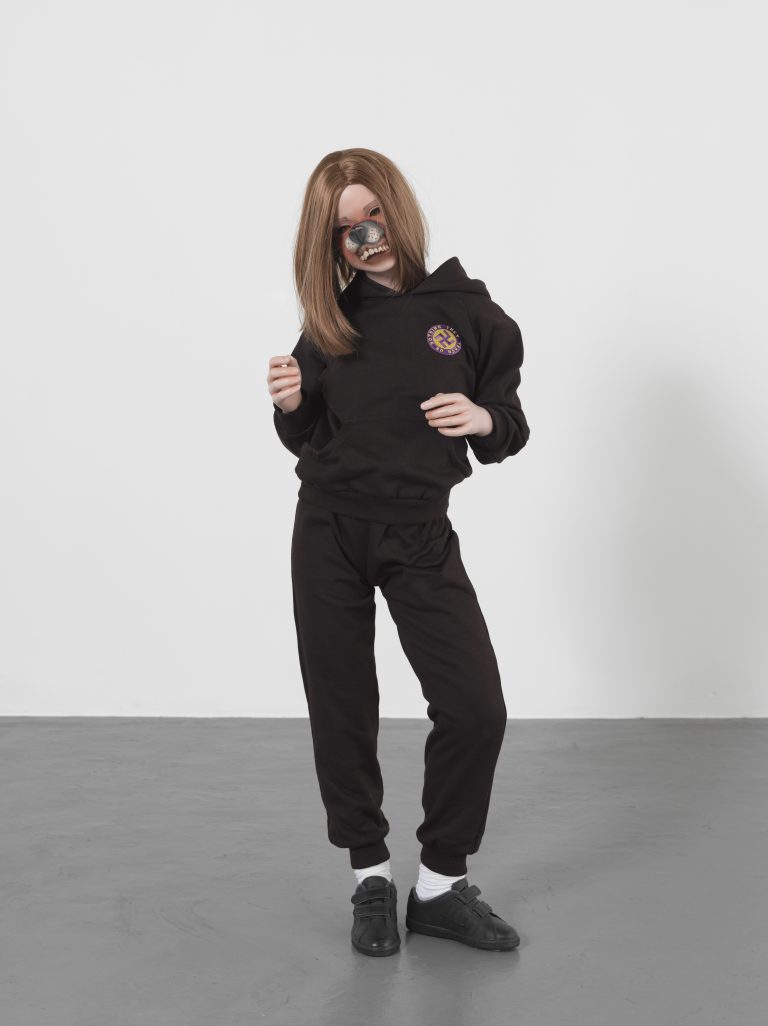 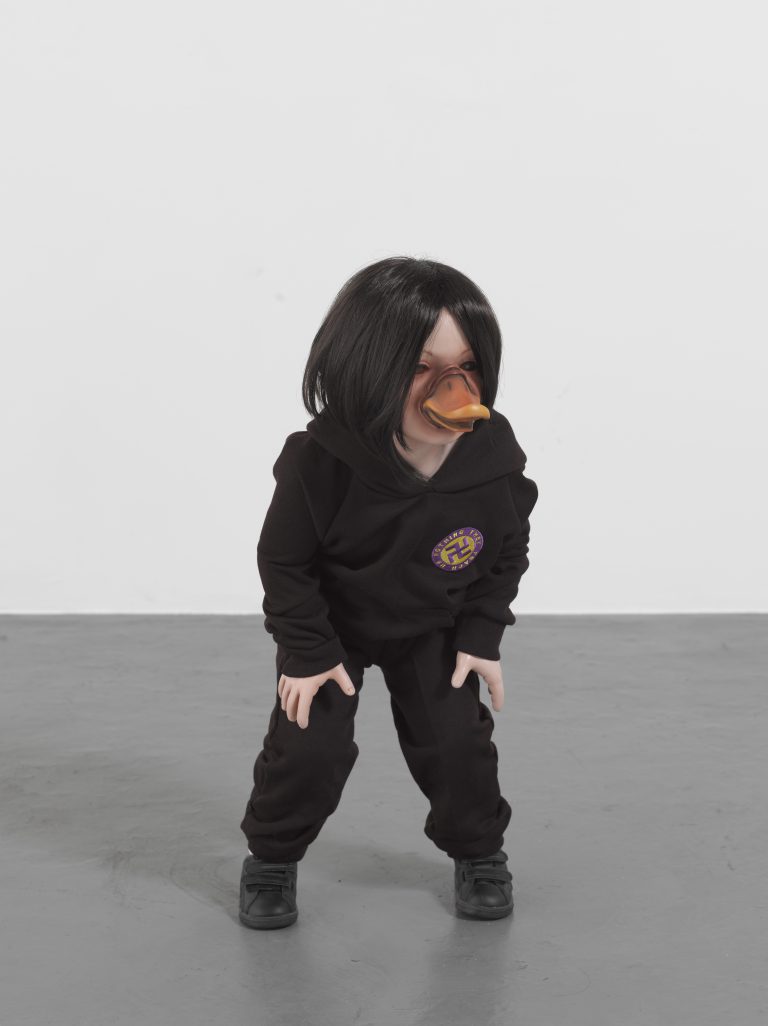 We are off course aware that the bloodshed in the work ‘Unhappy feet’ is fictional and that the actors are interchangeable but that doesn’t mean that the artists cease to put their finger on the sore spot of human history. In addition they demonstrate how images of violence are always carefully packaged to conceal something else. For example, works such as ‘I had to punish myself’, ‘The new arrival’, and ‘Someone offered me money to do it’ appear as precarious torture machines but are in fact well-crafted and monumentally sized bronze sculptures. These works also appear older than they are due to their stained finish, vintage colour-scheme and knick-knack choice of objects. The illusion of things looking older furthermore applies to the visual quality of the two-dimensional works in this exhibition. In ‘Living with nearly dead art’ and “The larger rainbow of human kindness’ we see the works of Jake and Dinos co-exist with older artworks as if they were from the same time-period. A clever mixture of drawing and printing techniques makes that the illusion could be perceived as a plausible historical artefact. 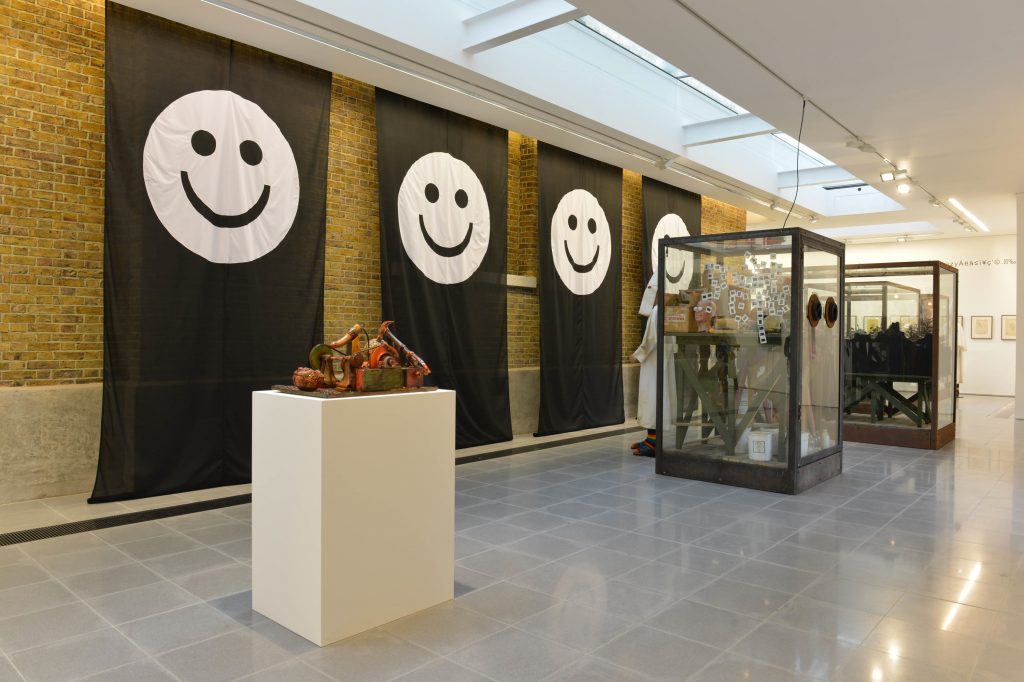 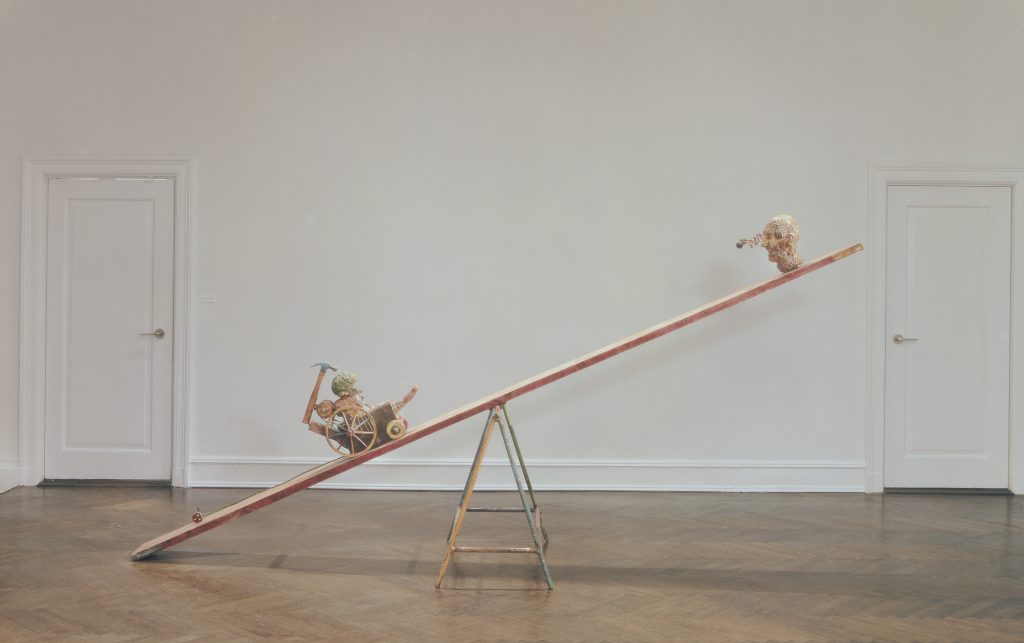 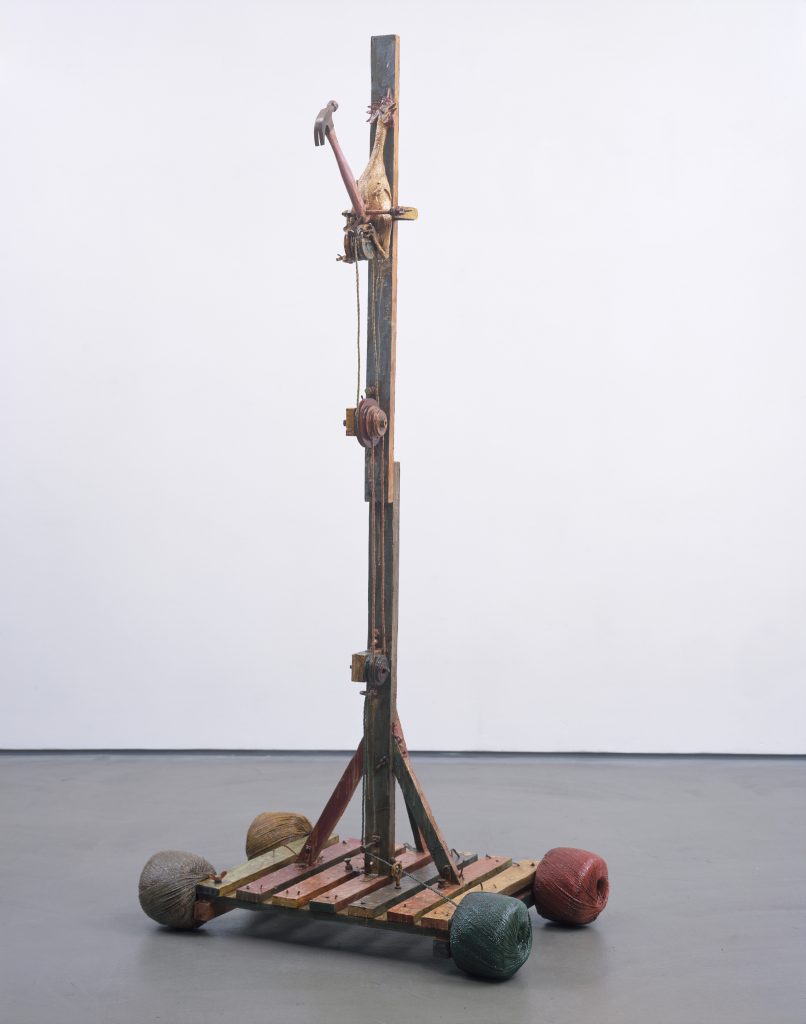 The works of the Chapman brothers exist in undefined place between the past and a dystopic future. This also applies to the work ‘Minterwertigkinder’,a group of child mannequins dressed in sportswear gazing at a painting. The title of this work clearly relates to the superiority/inferiority complexes of the Second World War whilst the facial modifications of the mannequins are more reminiscent of a future totalitarian regime in which a generation of inferior children emerged from failed bio-engineering experiments. It furthermore seems fitting that these children would be obliged to wear normcore sportswear and swastika badges. In that way they become the diametric opposite of the cultured human individual. This is by default the category that most exhibition visitors would like to place their selves in. This in turn brings about an opposition between the spectator and the artwork that confronts us with our tendency to fear, reject or exoticize a perceived impurity. We are more susceptible to that tendency than we would like to admit, especially today. Jake and Dinos Chapman are not afraid to point that out.