GABRIELLA SANCHEZ, IN A MANNER OF SPEAKING at Charlie James Gallery

GABRIELLA SANCHEZ, IN A MANNER OF SPEAKING at Charlie James Gallery

Charlie James Gallery presents In a Manner of Speaking, Gabriella Sanchez’s second solo exhibition at the gallery, opening Saturday, June 15th and running through July 20th, 2019. The show will present eight new paintings, four at large scale, all of which incorporate Gabriella’s demonstrated range of graphic media including acrylic, graphite, sharpie and oil stick, but which newly integrate archival pigment printing and photo collage onto the surface of the canvases. Gabriella’s work at its core explores the space between cultures – between the Mexican and the American, between the noble and ignoble, between the main and the margins. To give form to these threshold spaces, Gabriella creates composite portraits of people and of ideas of people, which are assembled using oppositional binaries expressed through language and in form. Gabriella employs repetition both to establish and to deconstruct her signifiers. Every painted figure has an oppositional printed counterpart, the images of which derive from Gabriella’s archive of family photographs. The photographs are exclusively of men, and those selected emphasize the physical poses struck by her male family members, poses that can evoke a stereotyped form of hyper-masculinity. As in past work, the paintings in this series contain language that can be interpreted multiple ways. Some of the words included are: Form/ From, SA LUTE, Suit(able), and Gabriella frequently contraposes the hegemonic Helvetica font with the Latinx-associated Gothic font. The style of the paintings evokes collage but is organized by a design sensibility, and thus suggests another dualism – that of design and fine art. The paintings undo the process by which meaning gets assigned – they disassemble the process into steps, component parts, making visible the mechanics of representation. 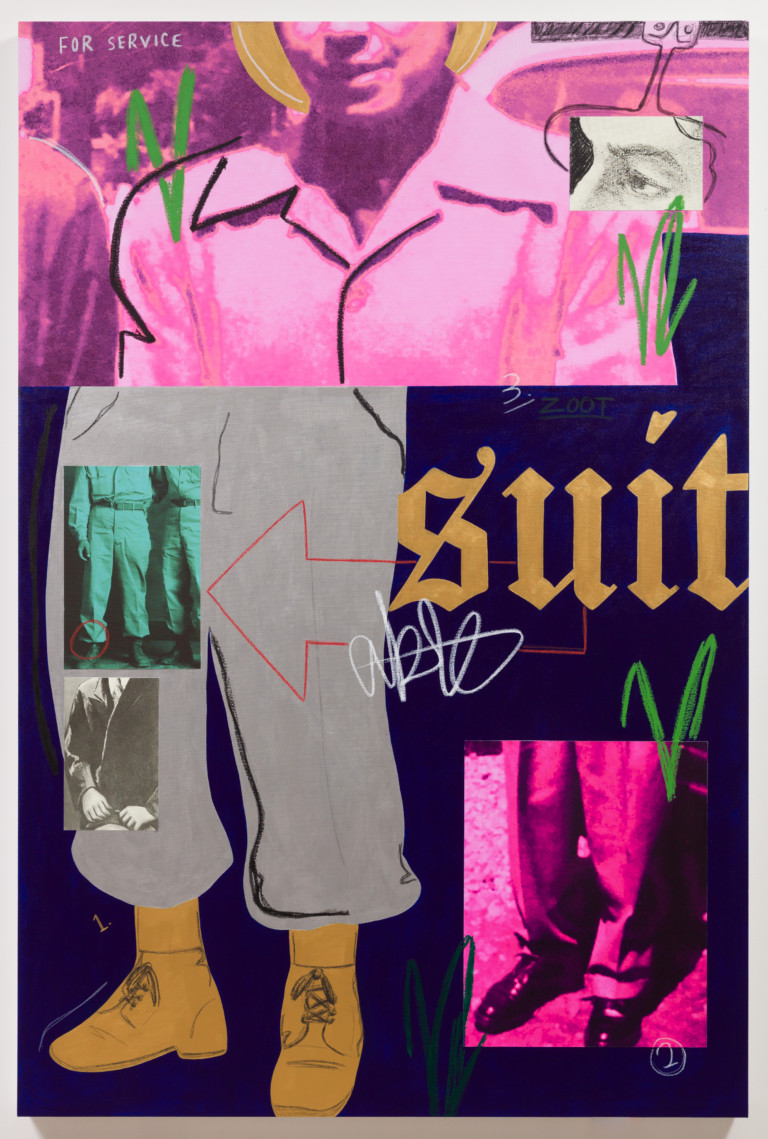 Gabriella Sanchez (b. 1988, Pasadena, CA) received her BFA in 2011 from PLNU in San Diego, CA. She worked for several years as a full time graphic designer, executing projects with Nike, Toyota and other significant clients. She began exhibiting her paintings and works on paper in 2016, and her work has been exhibited in spaces such as Jeffrey Deitch (New York), Charlie James Gallery (LA), Páramo Galeria (Guadalajara), the Crocker Art Museum, LMAK Gallery NYC, and ltdla. She has shown at numerous art fairs including Zona Maco, EXPO Chicago, and the Seattle Art Fair. Her work is in notable collections including the Crocker Art Museum, the JP Morgan & Chase Collection, and numerous private collections. Gabriella lives and works in Los Angeles, CA and is represented by Charlie James Gallery.