Like a diarist, I record the living universe; this sun, this cloud, this rain, this tree, this animal, this season, this day, this hour, this wind, this kind of earth, this kind of water, this sound in the grass, this pitch of wind, this silence.
– Ugo Rondinone

Kukje Gallery presents earthing, an exhibition of work by the Swiss artist Ugo Rondinone. This is the second solo exhibition of the artist at the gallery. Installed in both Kukje’s K2 and K3 galleries, earthing will include four distinct bodies of work that, though different, share the artist’s sensitive approach to materials and his commitment to exploring the role of nature in shaping the human experience. Throughout the various mediums the artist retains his focus on observation and recording “the living universe.” 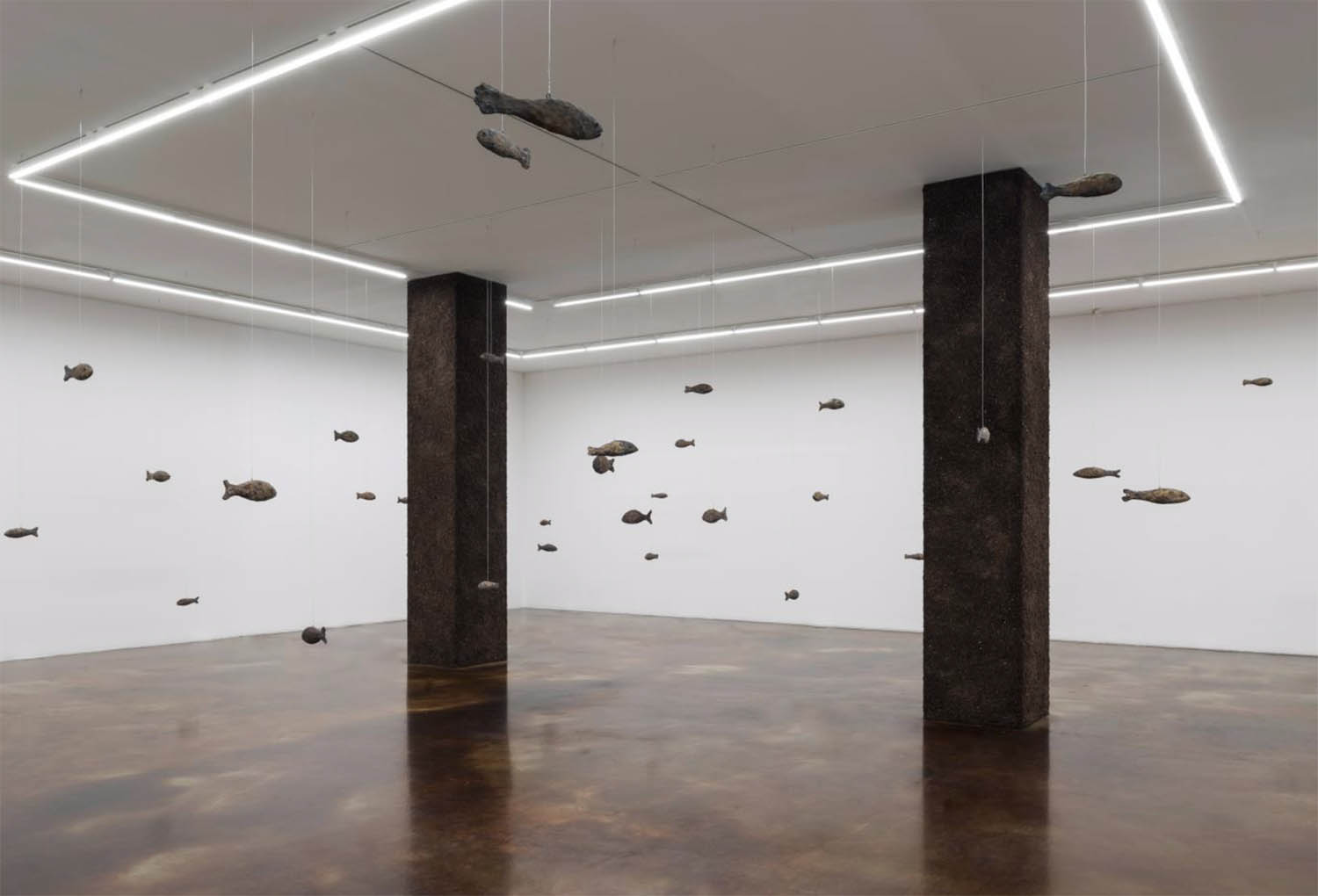 The exhibition begins within the K3 gallery and a single sculpture that sits in the heart of the space. Titled the sun (2017), this circular sculpture is a massive gilded bronze ring constructed using bent tree branches the artist gathered. Balancing vertically on the floor in the middle of the gallery and resembling a great gate, the sun mirrors the way the artist has used other circular forms such as clock faces to suggest passage across time and through space. In much the same way that the hands of a clock follow the cycle of the sun, the sun powerfully evokes the force and omnipresence of our most proximate star in its symbolic use of the circle. Rondinone’s decision to construct the ring by lashing overlapping wooden branches together with wire, combined with his transformation of these materials into weighty but radiant gilt bronze, allows him to celebrate the paradox of our everyday reliance on the sun’s energy, and its mythic incarnation in our imagination. Confronting this archetypal power, Rondinone uses gold and casting, as processes of transformation, to further tie the sun to metamorphosis and the romantic tradition of synthesizing nature with the sublime. In the K2 gallery, the artist presents a site-specific installation comprised of three discreet works that together create a total environment. The first is titled primordial (2016) a room-sized work that consists of fifty-two life- sized, hand-sculpted cast bronze fish that hang from the ceiling. primordial is a body of work in a larger series consisting of three animal groups: primitive (birds), primal (horses), and primordial (fish). Each group represents a natural phenomenon or element: air, earth, and water. 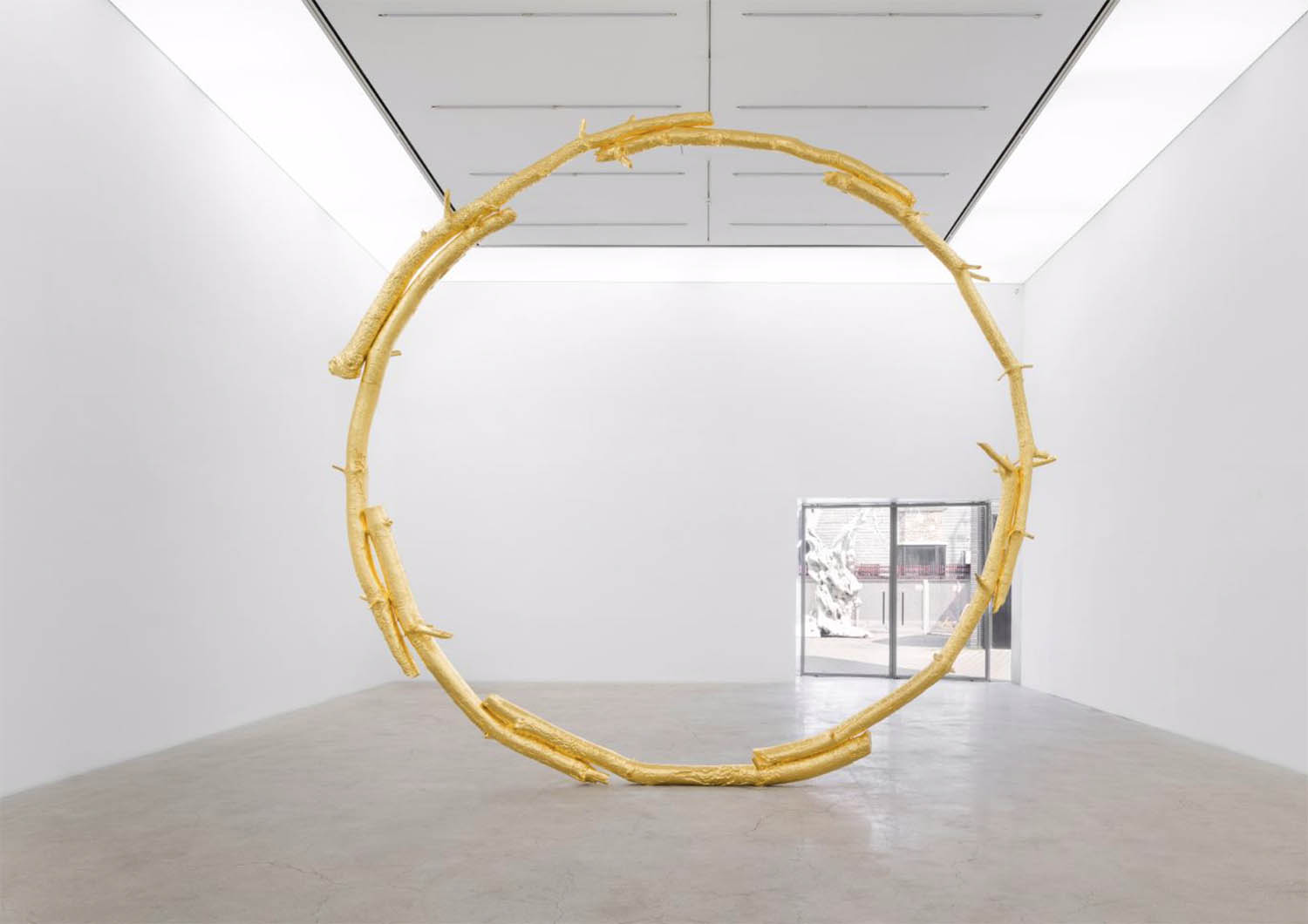 Primordial is installed with two other works two standing landscapes (2019) and yellow white green clock (2012), balancing the conceptual precision and interest in theatrical spaces the artist is known for. The fish in primordial are hung evenly throughout the K2 gallery; suspended at differing heights, they create a sense of tremendous depth, beckoning the viewer to walk slowly within the space as if they were carefully navigating an underwater forest. This sense of entering an enchanted space is heightened by a site-specific work titled two standing landscapes which consists of a unique soil mixture that has been applied directly to the pillars that punctuate the gallery’s interior architecture. Covering them completely, the pillars become discreet, uncanny objects floating in space. Part of an ongoing series of soil sculptures, two standing landscapes has the effect of transforming the gallery into something organic, charging it with a metamorphic air. While the application of the rough medium evokes a wild, inchoate environment, Rondinone’s careful attention to the installation maintains a sublime balance with the other two works, thereby insuring the viewer is held in a state of meditation as they contemplate material fragility, mass and weightlessness, and their own body. 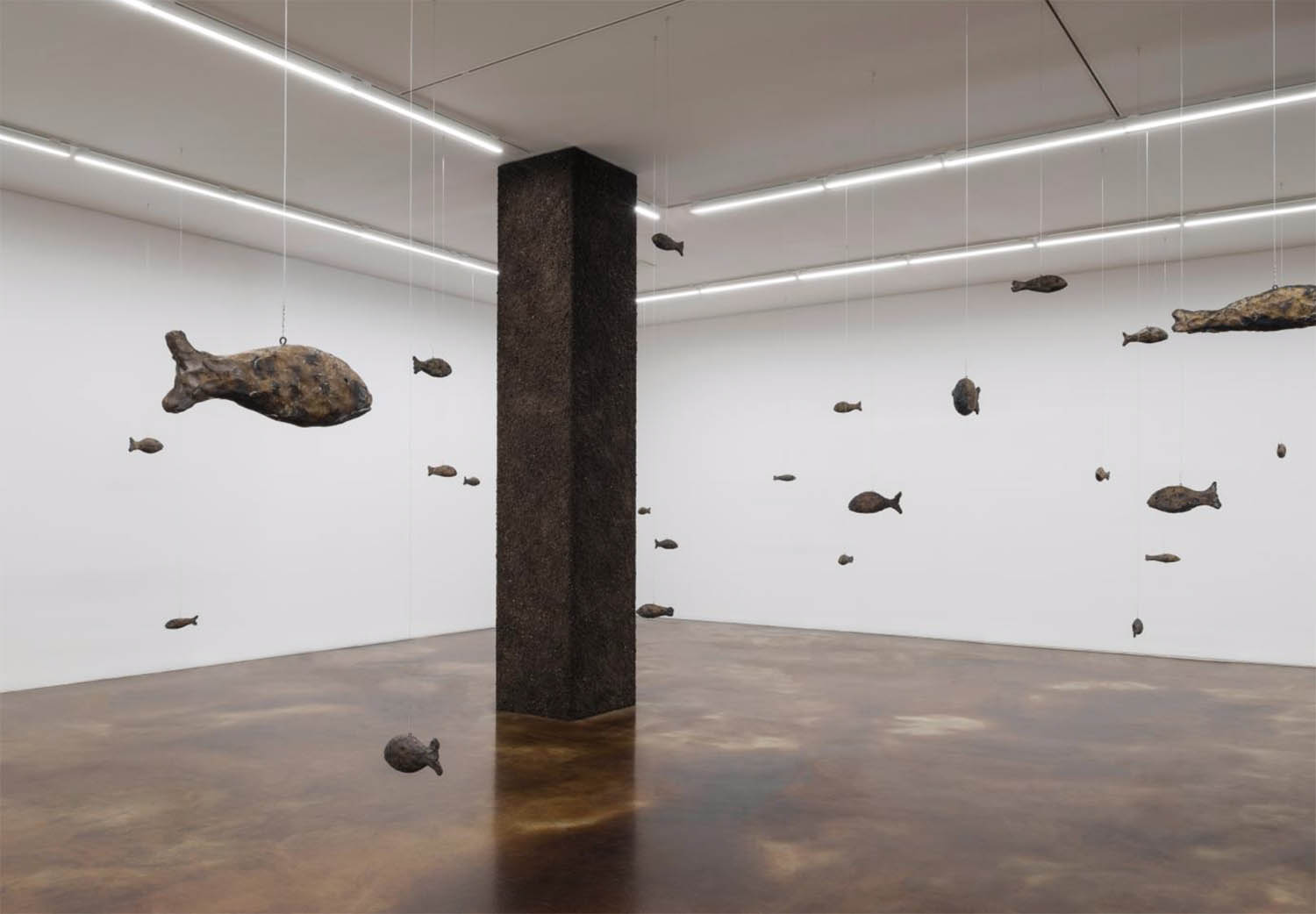 This sense of being immersed in a sculptural environment allows Rondinone to accomplish one of his stated goals for the landscape series, “creating a mental space.” This interest in phenomenology and the way the observation of nature can mirror consciousness is further evoked by the presence of time, illustrated by an exquisitely fabricated stained glass clock-face that hangs on the gallery’s far wall: yellow white green clock. The final work in K2, this modestly scaled work includes the Roman numerals familiar from a regular clock but has no hands, thereby suggesting not only the passage of time but something more metaphysical; glowing against the gallery wall, the work resembles a window into another space and echoes the way colored glass has been used in churches to signal transcendence. In this way, the clock face suggests a porthole or ontological threshold and acts as a poetic double entrende, courting the viewer’s imagination to visualize what lies beyond the gallery’s walls. In much the same way, each fish in primordial, individually crafted and bearing the fingerprints of the artist, has been given a separate unique title by Rondinone, thereby setting it apart from the others and giving it a special power. Titles such as the boulder, the marsh, and the ecosystem, both as singular ideas and when taken together, create a poetic vehicle for transporting the viewer—a parallel meaning that echoes the clock face that embodies but does not tell the time.