Levi van Veluw’s latest solo presentation ‘Beyond Matter’ at Galerie Ron Mandos displays a mesmerizing interplay between sacred geometry and organic interference. This principle slowly unfolds through a series of blue assemblages mounted on the crisp white walls of the gallery. The first work encountered showcases a wooden grid flooded by formless heaps of clay that are slightly marbled. It appears as a snapshot in an active thought process in which the two brain halves congregate. Van Veluw’s thoughts seem to physically manifest, whilst speaking to our own processes of deciphering that manifestation. 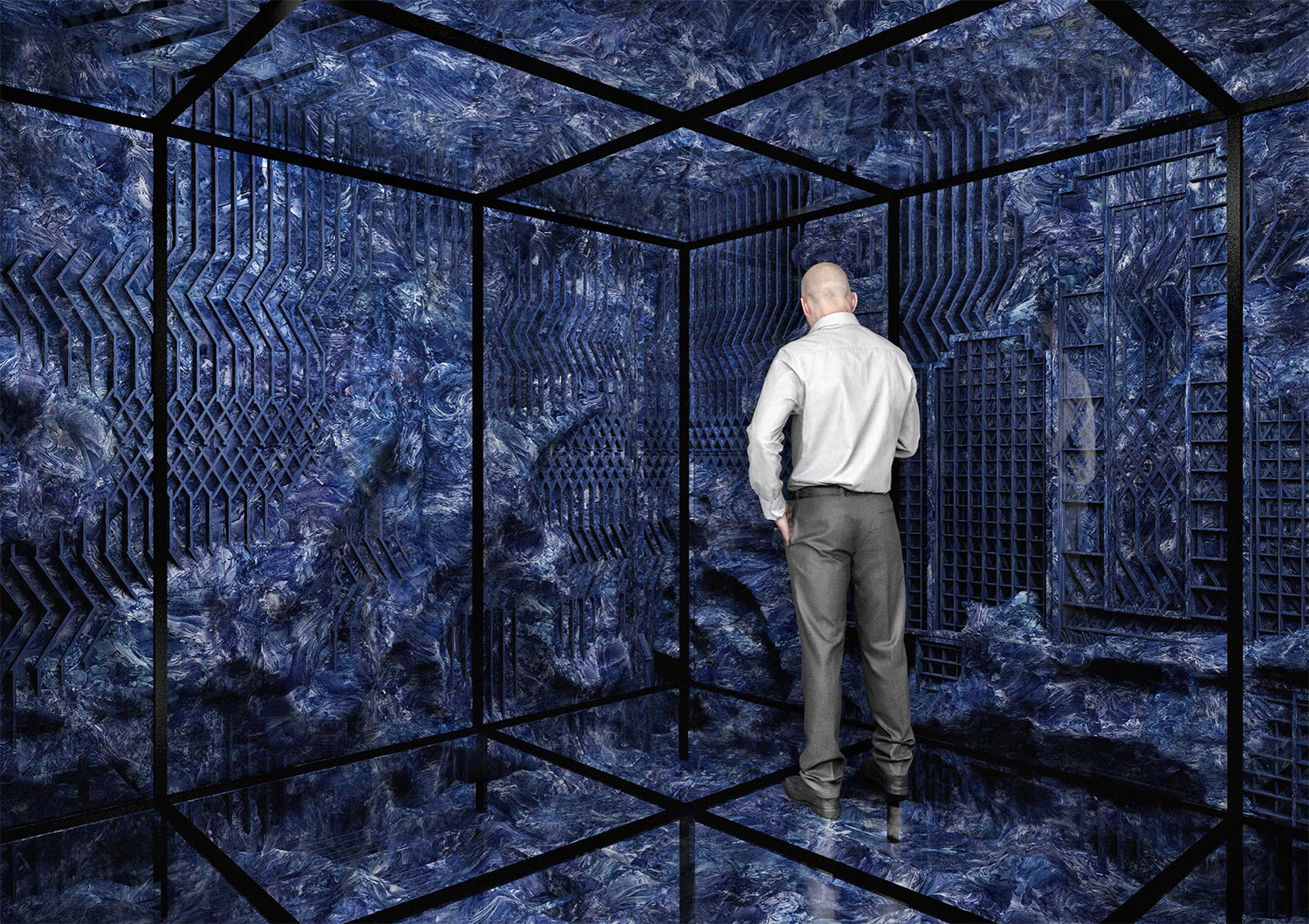 The display of the artist’s process seems to be a primary concern as the next few assemblages on the wall address the manual labour that went into that work. Up close a multiplicity of finger prints are revealed, pressing the blue clay into multiple geometric arrangements. From afar, we see harmonious compositions with a slight edge of whimsicality. The works contain a delicate balance between order and chaos as the artist’s neurotic tendency to perfect things is countered by the slight imperfections that occur during manual clay modelling. 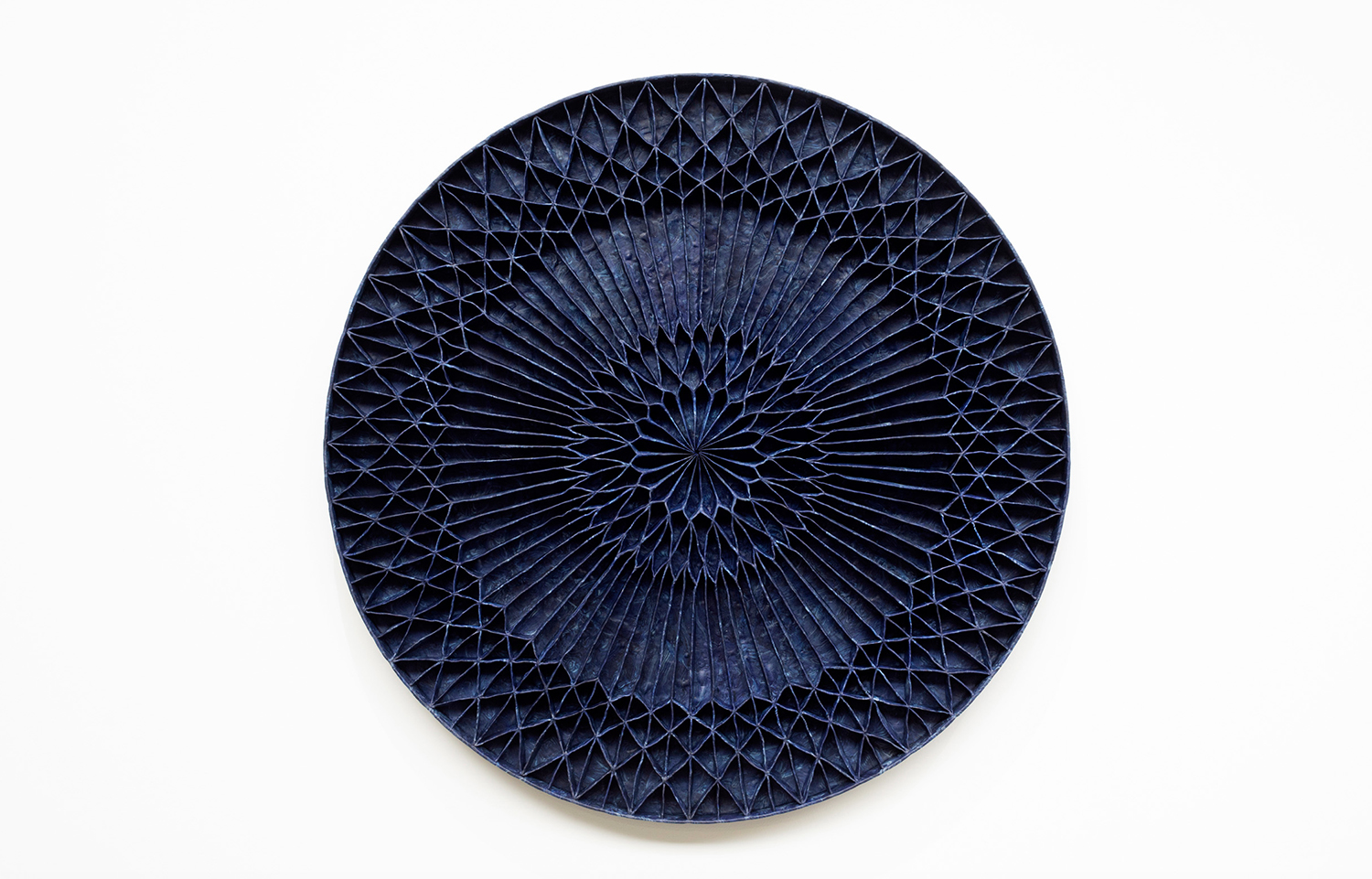 ‘Beyond matter’ clearly shows the artist’s ability to challenge his previous works. The previous work of the artist shows a strong inclination to impose order on the natural world. This new work clearly inverses that inclination. Van Veluw allows uncontrollable materials and human error to interfere with his imposed order. The consistent repetition of this exercise throughout the show testifies to a profound ability to let things go. This adds an additional dimension to the artist’s work that we haven’t seen before to this degree. 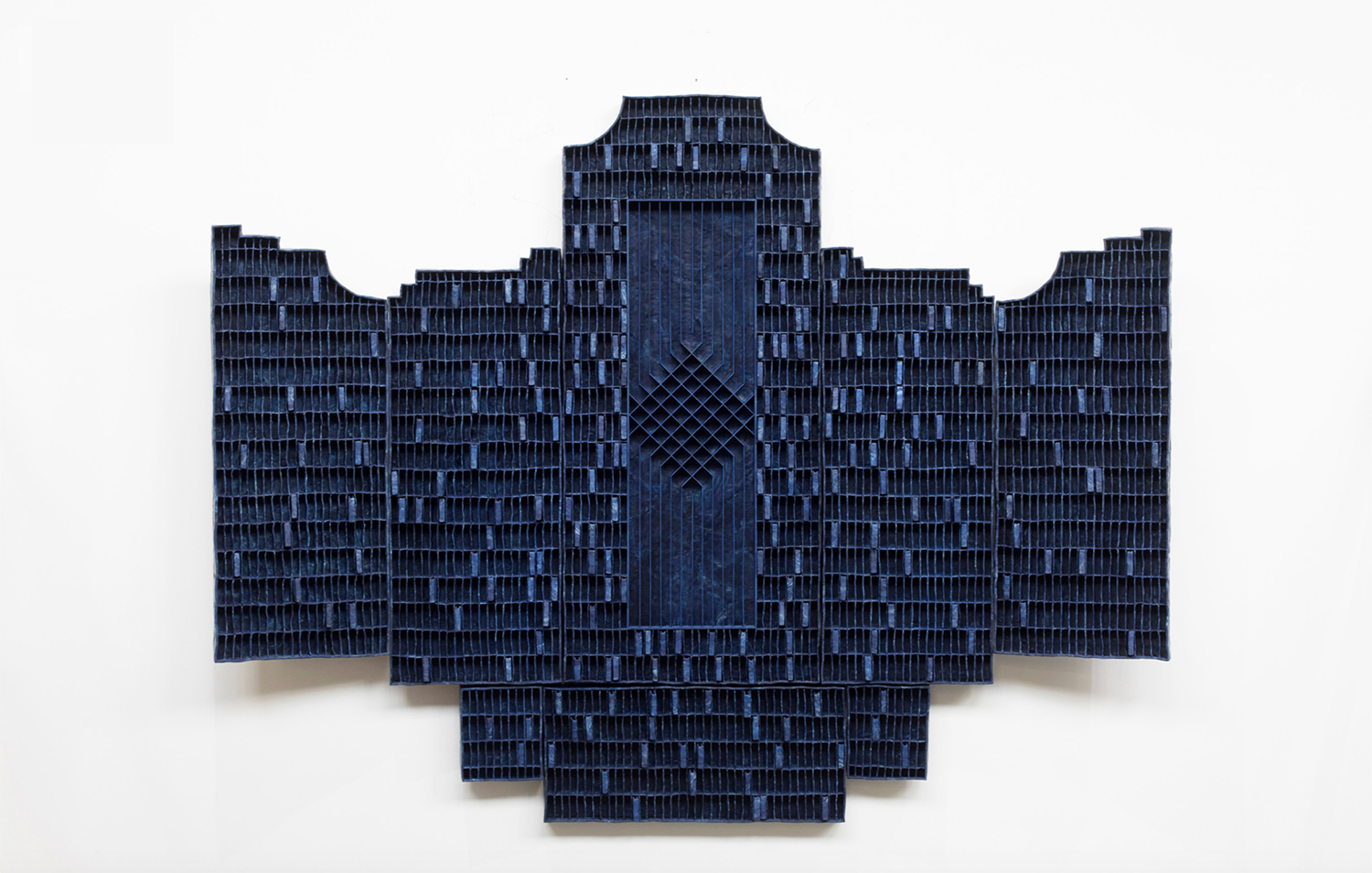 This sentiment of letting things go also ties in with some of the religious connotations we find in van Veluw’s wall pieces. During a studio visit, the artist mentioned how he is fascinated by the way in which humans turn immaterial and spiritual experiences into material substances. One work contains a clay grid stuffed with box-like inserts, strongly reminding me of the little notes that are stuck between the remainders of the Jewish temple wall in Jerusalem. Equally, the altar-screen silhouettes in some other wall pieces could be found in one Christian Churches down the road. Furthermore, the geometry throughout the work draws connections to patterns in a nearby Mosque. The colour blue, which is omnipresence throughout the presentation, ties the works together as the blue sky that covers all the above religious institutions. 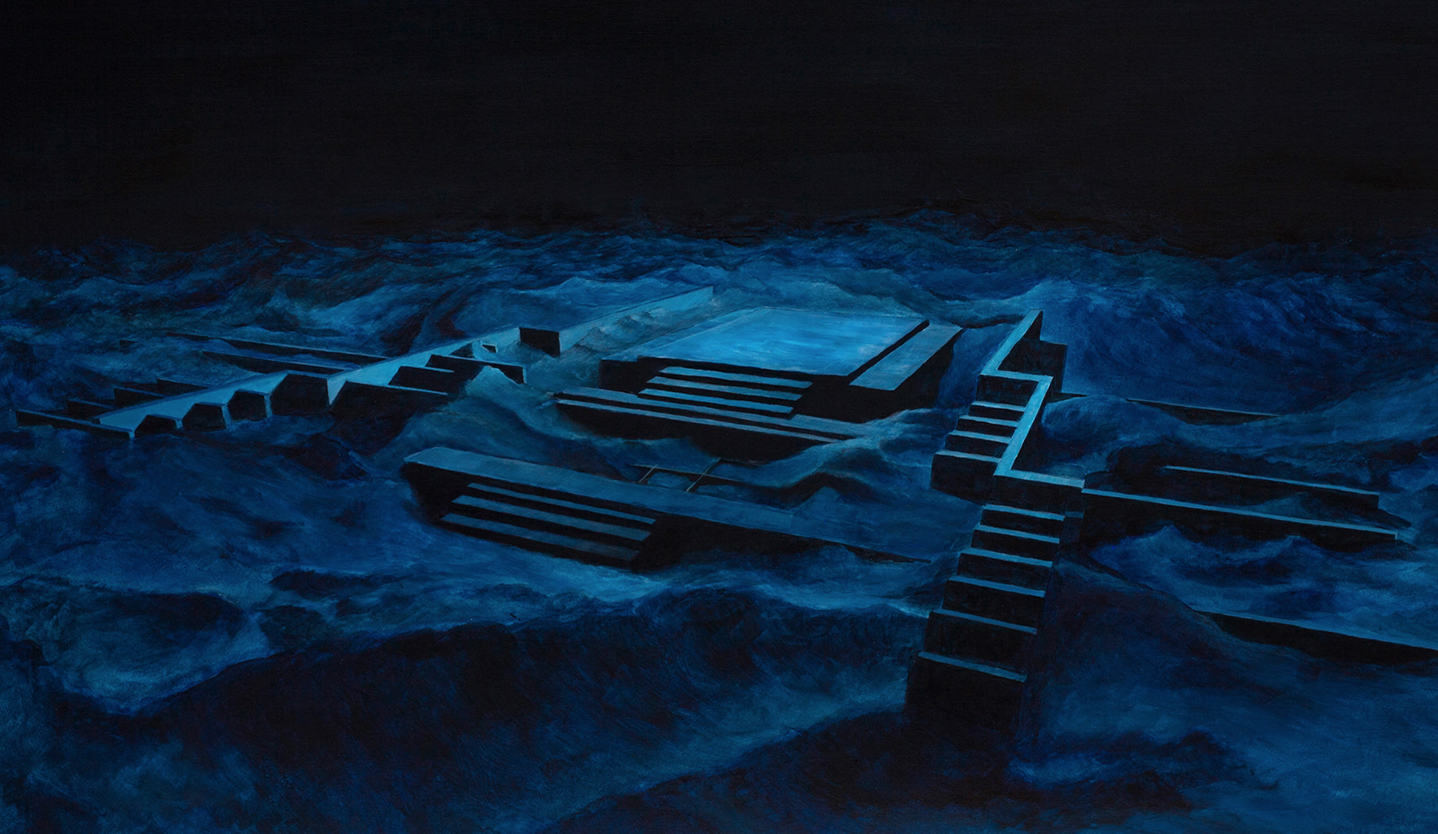 The coloration of van Veluw’s work also invites contexts beyond the three big religions. This becomes apparent when one of the wall pieces appears to be a passage to a smaller installation space within the gallery. Walking through it, we enter an industrial cube of steel and glass. Behind it, we again observe a set of blue grids flooded by marbled matter. But this time it looks like the alchemical aftermath of a volcanic eruption that preserved an array of ancient artefacts, that have now been approved for a public viewing. 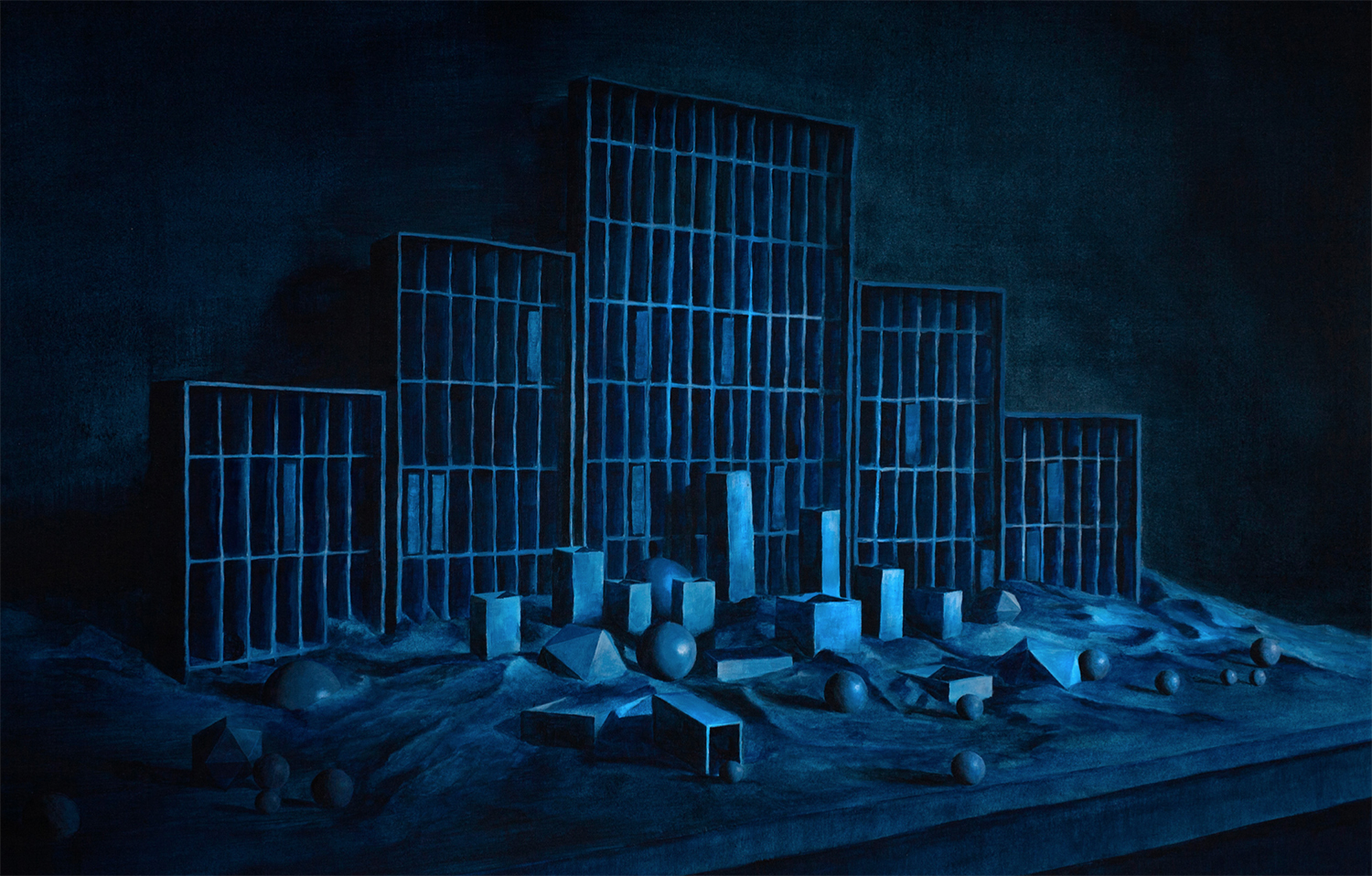 Even when repeated, no pattern looks the same within van Veluwe’s latest show. Every little mark and tweak are to be enjoyed in their own right, perhaps encouraging us to let ourselves go a little whilst doing so. Nevertheless, I am very curious about how these current wall pieces might translate into more floor-based sculptural works. This is another area in which the artist has previously produced a lot of  works with a high degree of geometric perfection. Only time will tell whether the artist will allow for imperfection in that area as well.

ALL IMAGES ARE COURTESY OF GALERIE RON MANDOS. COPYRIGHT © THE ARTIST