It is unusual to notice how pleasant the acoustics are in an art gallery. British artist Oliver Beer, however, harnessed the church-like space that is Galerie Thaddaeus Ropac in the Marais in January by placing a combination of objects together on stark white plinths and made them “sing”. Black microphone stands and messy wires cut through the otherwise clean space. A small speaker resonated a specific note within the pieces that, when they were played simultaneously, created an ambient hymn. Above, the skylight bathed the work in a soft, suspended light. He has deemed this combination of vessels and their sounds “Household Gods”. 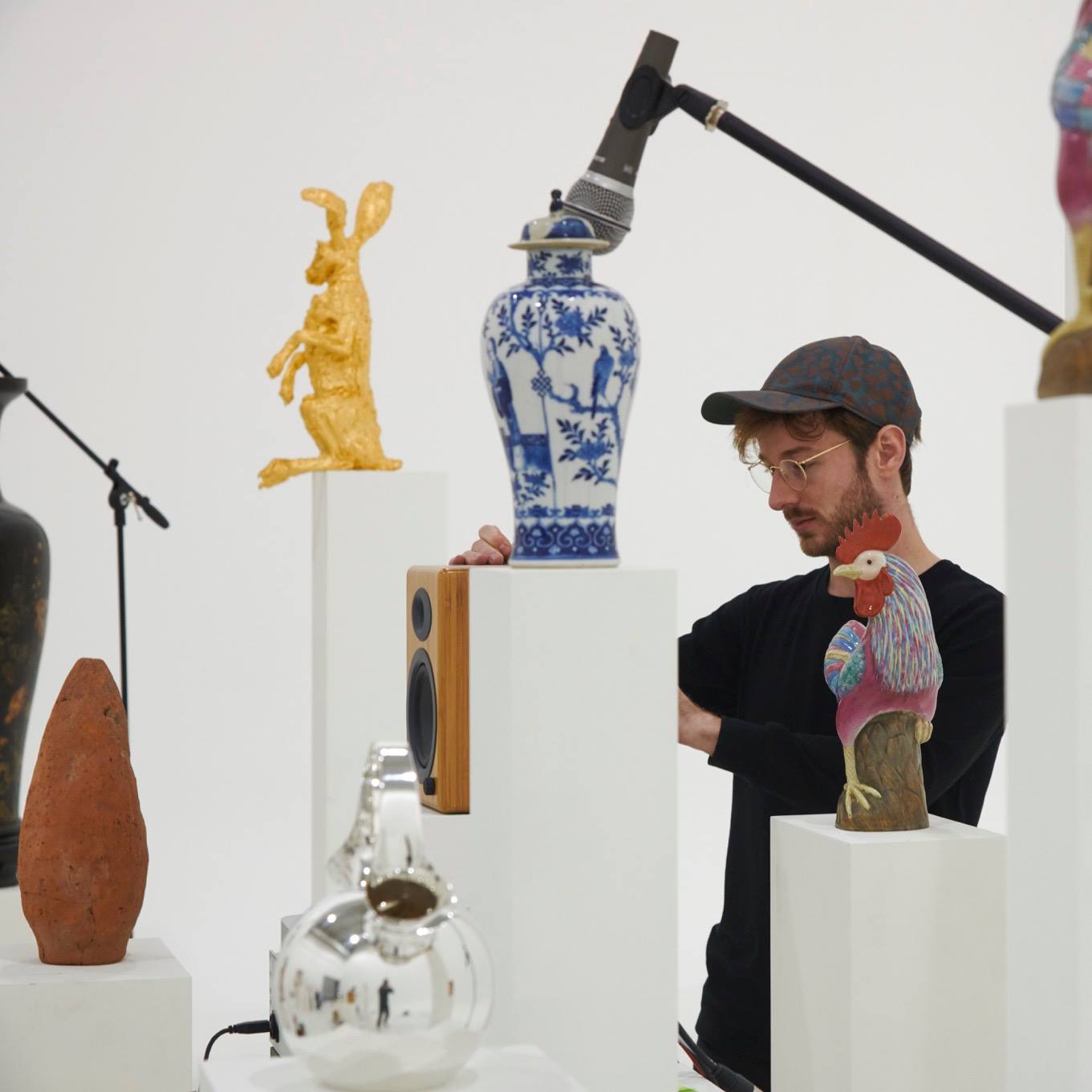 Placed at different heights, some too high to peer inside, the objects were on display to be marveled at. They appeared as though they could have been found at a flea market, but in Beer’s case, they came from a family member’s home in Kent, England. They ranged anywhere from a kitschy porcelain pig to a small pot in the shape of the Egyptian divinity Bes, from 4th-1st century BC. Beer transformed their functionality from mere articles to instruments where, for example, the small Egyptian pot plays a high B♭. 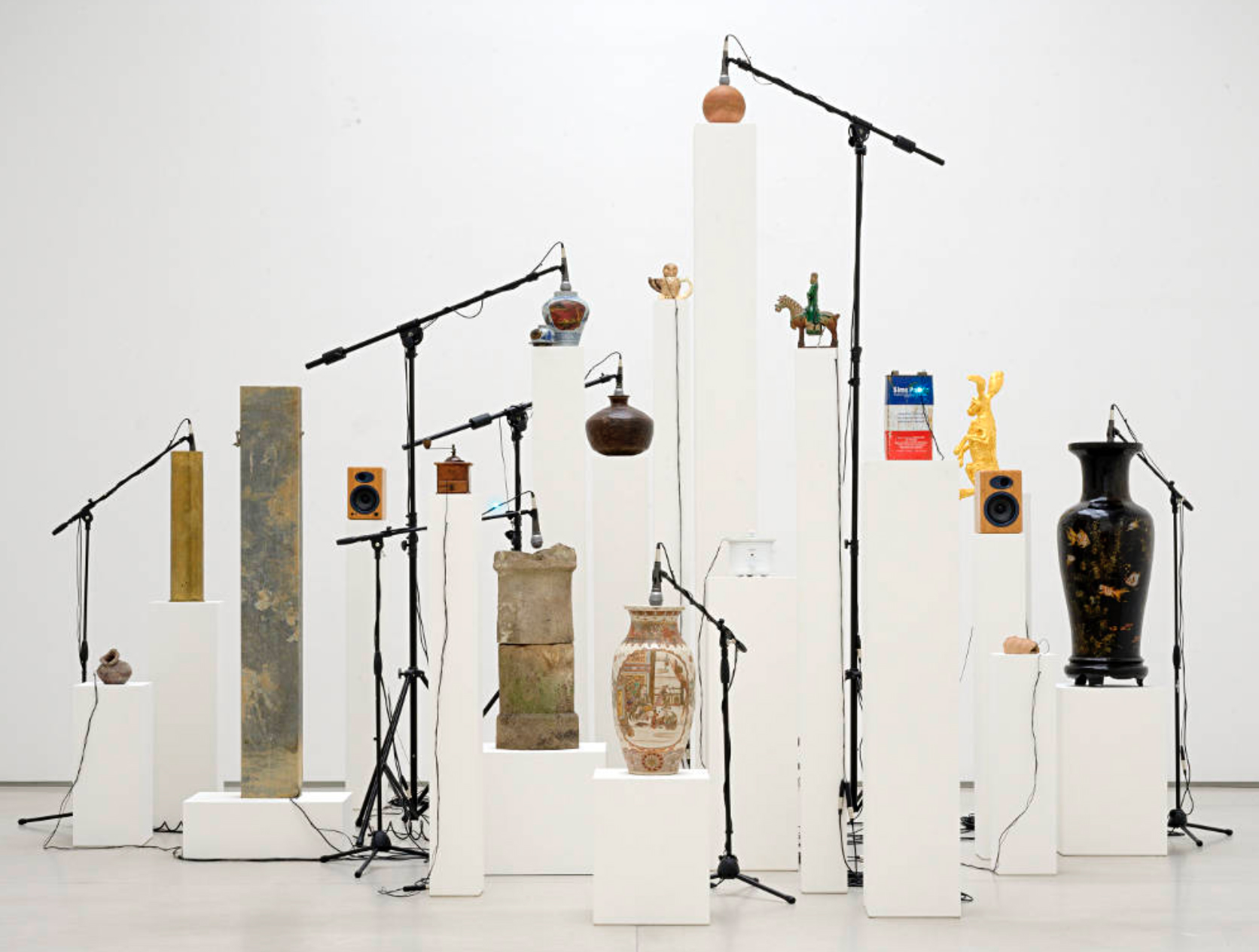 Often working with inanimate objects and architecture, Beer “stimulates” these spaces in order to create harmonies. He begins his process by singing into each piece, and discerns a certain note from the sound that reflects off its inner walls. If it is a note he can use, he adds the item to his “orchestra” of vessels. In a performance as a part of his “Resonance Project,” Beer similarly taught singers to use the interior of a large gallery as if it were an instrument. The participants were each given a single note that is attuned to the building’s natural frequencies to sing into the corners of the room which reverberated throughout. He stated that “an empty space has a note that belongs to it, its resonant frequency, so if you know how to stimulate a room to sing it is the one that will always come forth”. With “Household Gods”, he discovered the frequency that lies within the object. Beer convinces us that the space that occupies their interior is just as compelling as it’s exterior: each one creates its own note – the same note that, Beer describes, “has been ricocheting around inside there forever.” 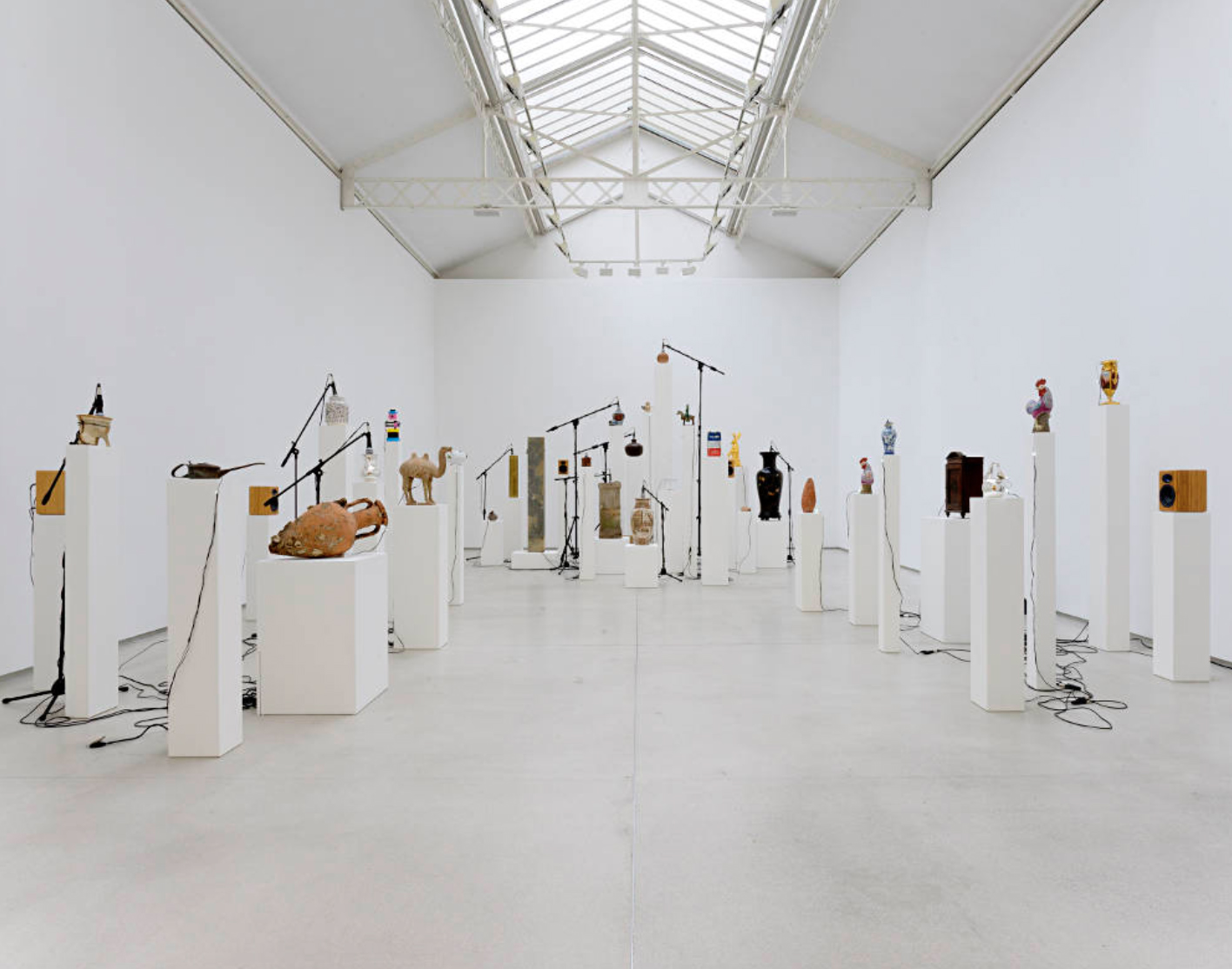 Beer expressed that each piece “has a story of survival. Taste, chance, politics, and balance of power all determine why certain objects come out of certain places at certain times.” In the periods of which they were created, cultural implications most likely influenced their details and shape. Those which come from the same culture and time period can be functionally and decoratively similar, say for religious reasons, thus the space that they envelop would play related notes. These details transform their status from “household” to “iconographic”, as they can be looked at and considered in a way that typically goes unacknowledged. The installation is paired with “two-dimensional sculptures”, wherein he used pieces of domestic and musical articles in which the destruction of these “iconographic” pieces suggests iconoclasm. The items are destroyed; they no longer serve their cultural, decorative, physical context. Their two-dimensionality silences them in contrast to their neighboring objects which have survived the passage of time and are “alive”, singing. 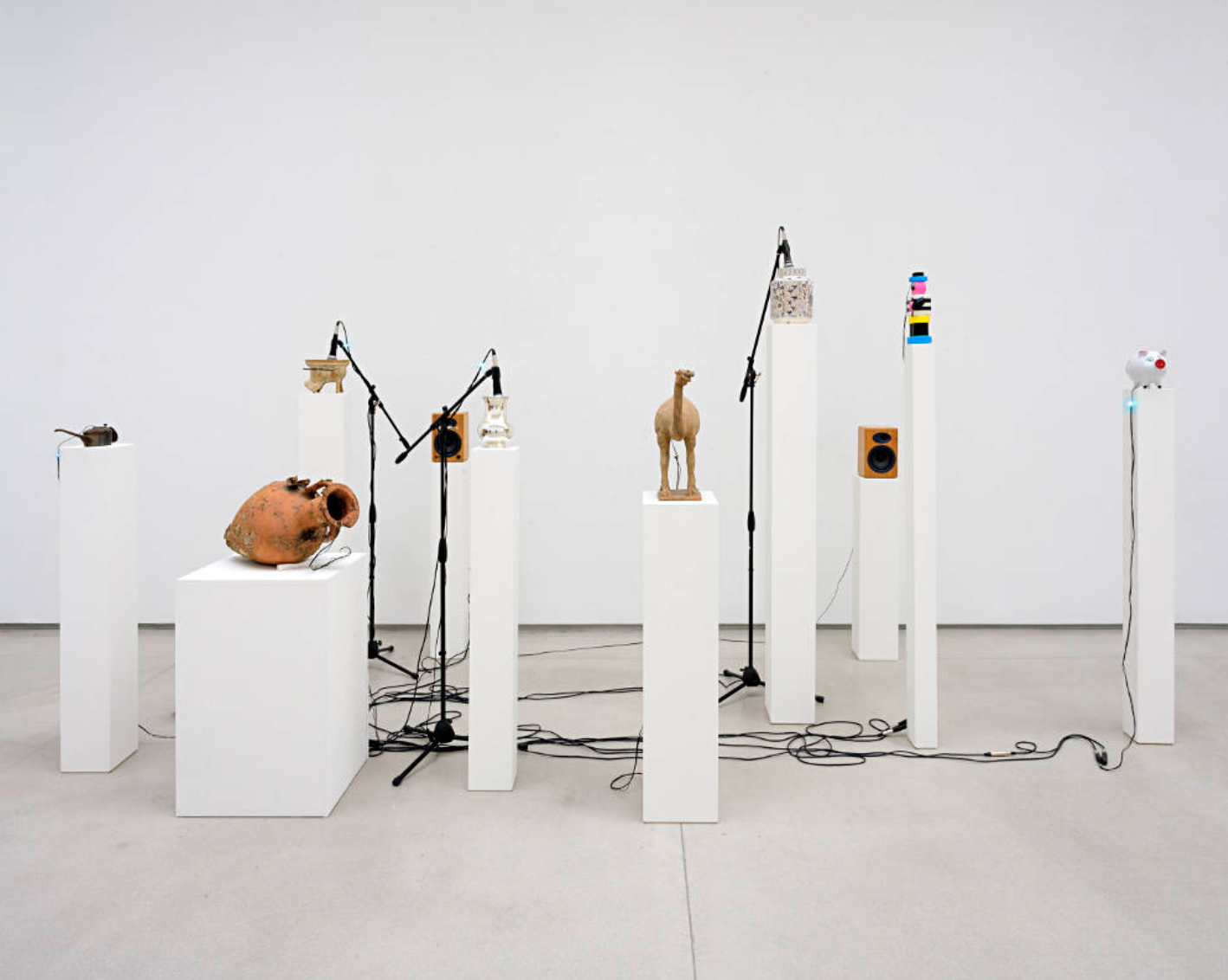 For an upcoming show at the Met Breuer, Beer has been invited to make a selection of 32 objects from the museum’s monumental collection for a similar installation. He will connect the natural frequencies of the items to keys on a keyboard and will welcome different composers to play music. In-turn, he is making a commentary on the power balance in the collection of non-Western objects which pass through and often remain in the homes and museum collections of Western countries. Beer illuminated domestic objects in the celestial light of Galerie Thaddaeus Ropac. He decontextualized “ordinary” items and breathed life into a void that was otherwise unexplored. “Household Gods” evokes the significance of the cultural implications of the items we own and see in museums, asking us to understand where they come from and why they exist there now. Beer invites us to look at objects in a conscientious way, placing emphasis on what factors go into their creation.