David Zwirner presents Sonic Albers, an exhibition that examines Josef Albers’s relationship to music, musical imagery, and sonic phenomena, on view at the gallery’s 537 West 20th Street location in New York. Organized in collaboration with The Josef and Anni Albers Foundation, the show will provide a far-reaching look at this underexplored facet of the artist’s practice. It will feature a wide selection of paintings, glassworks, drawings, and ephemera from throughout Albers’s career, including a number of the album covers he designed in the late 1950s and early 1960s. 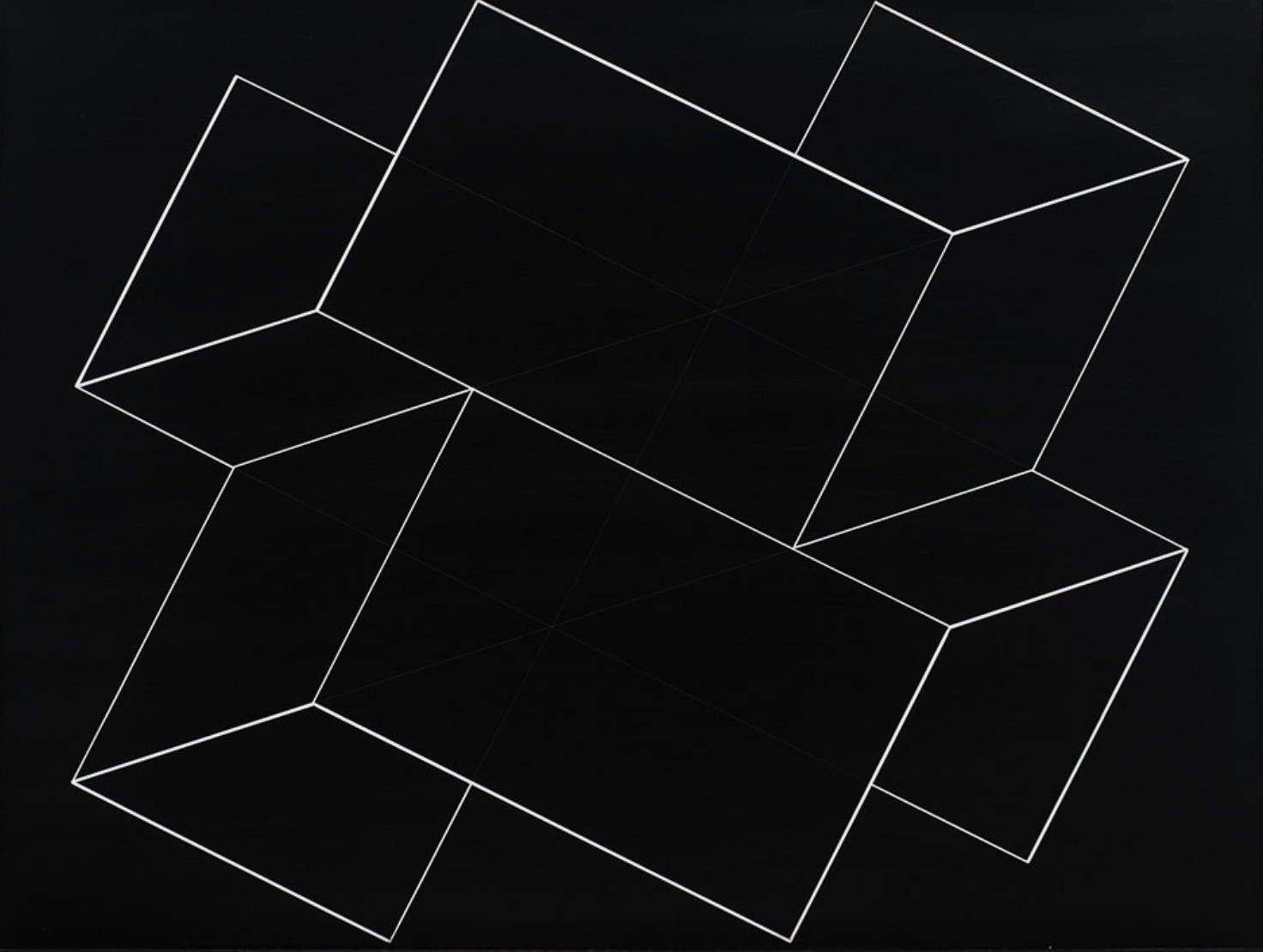 While he is recognized for his rigorously experimental investigations of color, spatial form, and visual experience, Albers often found analogies to and inspiration for his work in the compositional and structural qualities of music. In his seminal 1963 art text, Interaction of Color, Albers associated the relationship of colors in a work of art to that of music, writing: “Hearing music depends on the recognition of the in-between of the tones, of their placing and of their spacing,” to which he similarly notes that “colors present themselves in continuous flux, constantly related to changing neighbors and changing conditions.”1 These overlapping qualities of music and color are evident in Albers’s signature Homage to the Square paintings (1950–1976) and also his earlier Variant/Adobe series (1946–1966). Albers even noted that the underlying checkerboard-like structure of the Variant/Adobe works gives “a time-space order comparable to the beat measure in music and perhaps to . . . ‘Divisions on a Ground,’ the old musical term for ‘Variation.’”2 Many of the paintings from these series have titles that reference music or sound, and the contrasting and complementary use of color and form within the works reveal the principles of visual harmony and disharmony and consonance and dissonance—musical terms Albers used in his teaching and in describing art—that he sought to explore in his serial production. A selection of paintings from both of these groups of work will be featured in the exhibition. Some studies and preparatory works for these series will also be shown, and they visualize Albers’s working process, which he equated to conducting rehearsals and exercises before a performance or recital.

Much earlier in his career, long before he had established the visual principles for which he is celebrated today, musical imagery played an important role for Albers. In the 1910s, while he was just starting out as a professional artist, he produced expressionistic sketches and drawings of dancers and flute players that were inspired by the theater and ballet, several of which will be on view. These works illustrate Albers’s early interest in the rhythmic qualities of line and the interrelation between aural phenomena, movement, and visual experience. A group of his Structural Constellation engravings, which he began in 1949, shows how Albers continued to explore the relationship between line and movement. Space in these works appears to project and recede based on the relationships between the linear geometric forms. Like a musical composition, any change in the interconnected structure of the forms alters the entire experience of the work.

Several rarely seen sandblasted glass pieces that Albers produced while at the Bauhaus in the 1920s and early 1930s that are included in the show further represent how musical forms and symbols served as visual structures through which the artist explored seriality and abstraction. These include Treble Clef (c. 1932), a rare work related to Albers’s series of Treble Clef gouaches that he created between 1932 and 1935, and Fugue (c. 1926), a visualization of the compositional technique in music in which a short melody or sequence is introduced and imitated in successive and interweaving parts throughout a composition. The form of the fugue, a concept that appealed to numerous avant-garde artists in the early twentieth century, offered Albers an architecture through which to build a totally nonobjective visual system in which musical concepts, as he outlined in a 1964 text on the work, like “beat,” “measure,” “rhythm,” “instrumentation,” and “acoustic ‘mixture,’” all find visual form in an abstract, contrapuntal arrangement of studded rectilinear forms.3

Josef Albers (1888–1976) was born in Bottrop, Germany, and studied briefly at the Königliche Bayerische Akademie der Bildenden Kunst, Munich, in 1919 before becoming a student at the Weimar Bauhaus in 1920. In 1922, Albers joined the school’s faculty, first working in stained glass and, starting in 1923, teaching design. In 1933, he and Anni Albers emigrated to North Carolina, where they founded the art department at Black Mountain College. During their time at Black Mountain, Albers began to show his work extensively within the United States, including solo exhibitions at the Addison Museum of American Art, Andover (1935); J.B. Neumann’s New Art Circle, New York (1936, 1938); The Germanic Museum at Harvard University, Cambridge (1936); Katharine Kuh Gallery, Chicago (1937); San Francisco Museum of Art (1940); and the Nierendorf Gallery, New York (1941). The Alberses remained at Black Mountain until 1949 and in 1950 moved to New Haven, Connecticut, where Josef Albers was invited to direct a newly formed department of design at Yale University School of Art. In 1950, too, he developed what would become his seminal Homage to the Square series, which he continued to elaborate until his death in 1976. This body of work was featured in a major exhibition organized by The Museum of Modern Art, New York, in 1964 that traveled to twenty-two venues in the United States and Latin America. Albers retired from teaching in 1958, a few years prior to the publication of his important text Interaction of Color (1963), which was reissued in two volumes in 2013. Following numerous gallery and museum exhibitions, as well as his participation in documenta 1 (1955) and documenta 4 (1968), Albers became the first living artist to be the subject of a solo exhibition at The Metropolitan Museum of Art, New York, with his career-spanning retrospective there in 1971.

More recent exhibitions include Painting on Paper: Josef Albers in America, which originated at the Pinakothek der Moderne, Munich, in 2010 (traveled to Josef Albers Museum, Quadrat, Bottrop, Germany; Louisiana Museum of Modern Art, Humlebæk, Denmark; Kunstmuseum Basel; Centre Georges Pompidou, Paris; Centro de Arte Moderna, Gulbenkian Museum, Lisbon; and the Morgan Library and Museum, New York); Josef Albers: Minimal Means, Maximum Effect at the Fundación Juan March, Madrid, in 2014 (traveled to Henie Onstad Art Centre, Høvikodden, Norway); and A Beautiful Confluence: Anni and Josef Albers and the Latin American World at Mudec, Museo delle Culture, Milan, in 2015 to 2016. From 2016 to 2017, The Museum of Modern Art, New York, presented One and One Is Four: The Bauhaus Photocollages of Josef Albers. In 2017, Josef Albers in Mexico was presented at the Solomon R. Guggenheim Museum in New York and traveled to the Peggy Guggenheim Collection in Venice in 2018. The Musée d’Art Moderne de la Ville de Paris is planning a major survey exhibition of the work of both Josef and Anni Albers for 2019.

Since May 2016, The Josef and Anni Albers Foundation has been exclusively represented by David Zwirner. Sonic Albers will mark the gallery’s third solo presentation of Josef Albers’s work, following the exhibitions Grey Steps, Grey Scales, Grey Ladders, on view in New York in 2016, and Sunny Side Up, shown in London in 2017.