The springtime event in Paris that is not to be missed

Favouring a thematic approach and open to all mediums, the 21st edition of the fair will bring together 150 modern and contemporary art galleries under the majestic glass roof of the Grand Palais from 4th -7th April 2019.

An identity all of its own

Art Paris has an identity all of its own: an international art fair, it focuses on new discoveries, as well as placing special emphasis on the European scene from the post-war years to the present day, whilst exploring the new horizons of international creation, whether in Asia, Africa, the Middle East or Latin America.

On the up and up

With 150 galleries (44% of whom are first-time participants) compared to 143 in 2018, from 20 different countries (with for the first time Cameroun, Bulgaria, Mexico and Peru), the 2019 selection also bears witness to the fair’s move upmarket with the arrival of galleries such as Art : Concept, Ceysson & Bénétière, Jérôme Poggi, Praz Delavallade and SAGE Paris.

Pride of place goes to women artists on the French scene

Placed in the capable hands of AWARE: Archives of Women Artists, Research and Exhibitions, the 2019 edition presents a critical and subjective overview of the work of women artists in France from the post-war period to the present day with 25 projects selected from amongst the exhibits of participating galleries. This selection is divided into four themes: Abstraction, the Feminist Avant-Garde, Image and Theatricality. AWARE has also been invited to write a critical essay that situates each artist’s work in its historical context. AWARE was founded in 2014 by art historian Camille Morineau, who specialises in women artists. She is also the director of exhibitions and collections at the Monnaie de Paris. AWARE: Archives of Women Artists, Research and Exhibitions aims to produce, index and distribute information about 20th century women artists.

In parallel to the AWARE selection, numerous galleries have chosen to present women artists: Isabelle Plat has a solo show at Galerie Eric Mouchet, Teresa Tyszkiewic and Annette Barcelo are at Anne de Villepoix, Pierrette Bloch at Galerie Véronique Smagghe and Belgian artist Anne de Gelas is showing her work at SAGE Paris. 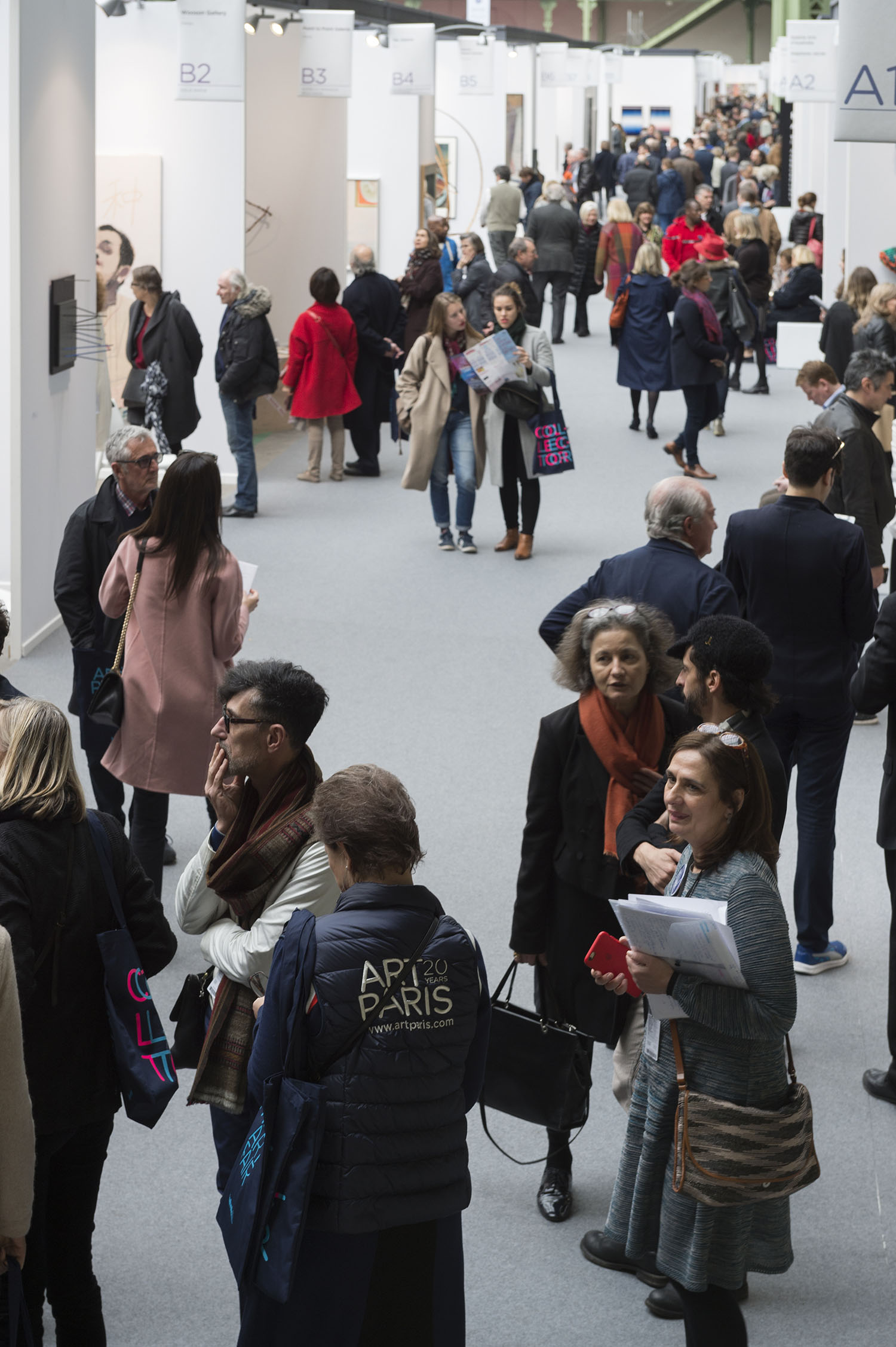 In 2019, Art Paris is setting out to explore Latin American art from the 1960s to the present day. Around twenty European, Asian and Latin American galleries are presenting an ensemble of 60 Argentinean, Brazilian, Chilean, Columbian, Cuban, Mexican, Peruvian and Venezuelan artists. In parallel, other projects such as a video programme, installation artworks, the presentation of a private collection and conferences at the Maison de l’Amérique latine will highlight the creative effervescence that reigns on the continent. Southern Stars: An Exploration of Latin American Art is curated by the independent exhibition curator Valentina Locatelli, who is based in Switzerland.

Galleries spread throughout the fair’s different sectors invite visitors on a journey of discovery through Latin America’s different scenes, considering them from both a historical and contemporary point of view. Galería Freijo is focusing on two historical figures from the Mexican scene, abstract sculptor and co-founder of Stridentism German Cueto and Felipe Ehrenberg, a leading light in the field of Mexican conceptual art in the 1970s. Numerous galleries are showcasing the work of the proponents of geometric abstraction from the 60s and 70s, including Carlos Cruz-Diez (Venezuela), Ivan Contreras Brunet (Chilli), Dario Perez Flores (Venezuela) and Marino di Teana (Argentina). Women artists are also in the spotlight with solo shows featuring Léonor Fini, a surrealist painter born in Buenos Aires (Weinstein/Galerie Minsky); Mexican artist Carmen Mariscal, whose work addresses questions of gender and female stereotypes (Ana Mas Project); and Sandra Vásquez de la Horra, a Chilean artist who is the subject of a mini-retrospective at the Wooson Gallery featuring her drawings that touch on questions of sex and religion. The Cuban scene is the subject of a group exhibition at the Xin Dong Cheng Gallery, which brings together six artists from different generations: Manuel Mendive, Raúl Martínez, Adonis Flores, René Francisco Rodriguez, Michel Mirabal and Yunier Hernández Figueroa. Two galleries Nosco and Galerie Younique are showcasing the young Peruvian scene with emblematic figures such as Jose Carlos Martinat and Luis Martinat, two brothers who are famous for their installations that question the past and the present of post-colonial societies. La Balsa Arte (Bogota/Medellin) is presenting a dialogue between the works of three figures from the Columbian scene with drawings (Juan Osorno), paintings (Julian Burgos) and installation art (Luis Fernando Pelaez), whereas Galería Solo – Eva Albarran & Christian Bourdais has given over part of its space to Carlos Amorales, a major figure on the Mexican scene who works in different media such as video, installation art, photography and paper. Finally, Galería Ethra (Mexico) is showing three artists, Maria José de la Macorra, Alejandro Pintado and Maximo Gonzalez who are presenting their vision of the Mexican megalopolis.

In front of the entrance to the Grand Palais, visitors are welcomed by a monumental installation by Mexican artist Betsabeé Romero (Galería Saro Léon), which evokes a requiem in memory of that symbol of 20th century consumer society, the car. In the nave, the CCK (Centro Cultural Néstor Kirchner) from Buenos Aires, in collaboration with the Institut français d’Argentine, presents El verdadero jardín nunca es verde, an installation created by the Argentinean artist Nicola Costantino and inspired by The Garden of Earthly Delights by Hieronymus Bosch. Three artists, Marcelo Brodsky from Argentina (Galerie Artco), Colombian artist Stinkfish (Galerie Ernst Hilger) and Ricardo Rendón from Mexico (Galerie Wenger) will produce monumental compositions for the south and north walls of the nave.

The Project Room provides a forum for 16 Mexican, Columbian, Peruvian and Argentinean artists from different generations to present their videos around four themes: