Nate Lowman collects and transforms the detritus of contemporary American life, reevaluating familiar signs and symbols from print and electronic media as well as from street, home, and studio. In the liminal space between original and copy, his paintings in oil and alkyd resemble a sort of hybrid between the blurred Xerox image and a fresh tattoo, while his depictions of pop-culture figures, such as Marilyn Monroe and Nicole Brown Simpson, act as unlikely hieroglyphs, standing in for the mythologies that have built up around them. As Lowman’s impulses oscillate between additive and subtractive, print technologies and mass media take on the intimacy (and mortality) of flesh. 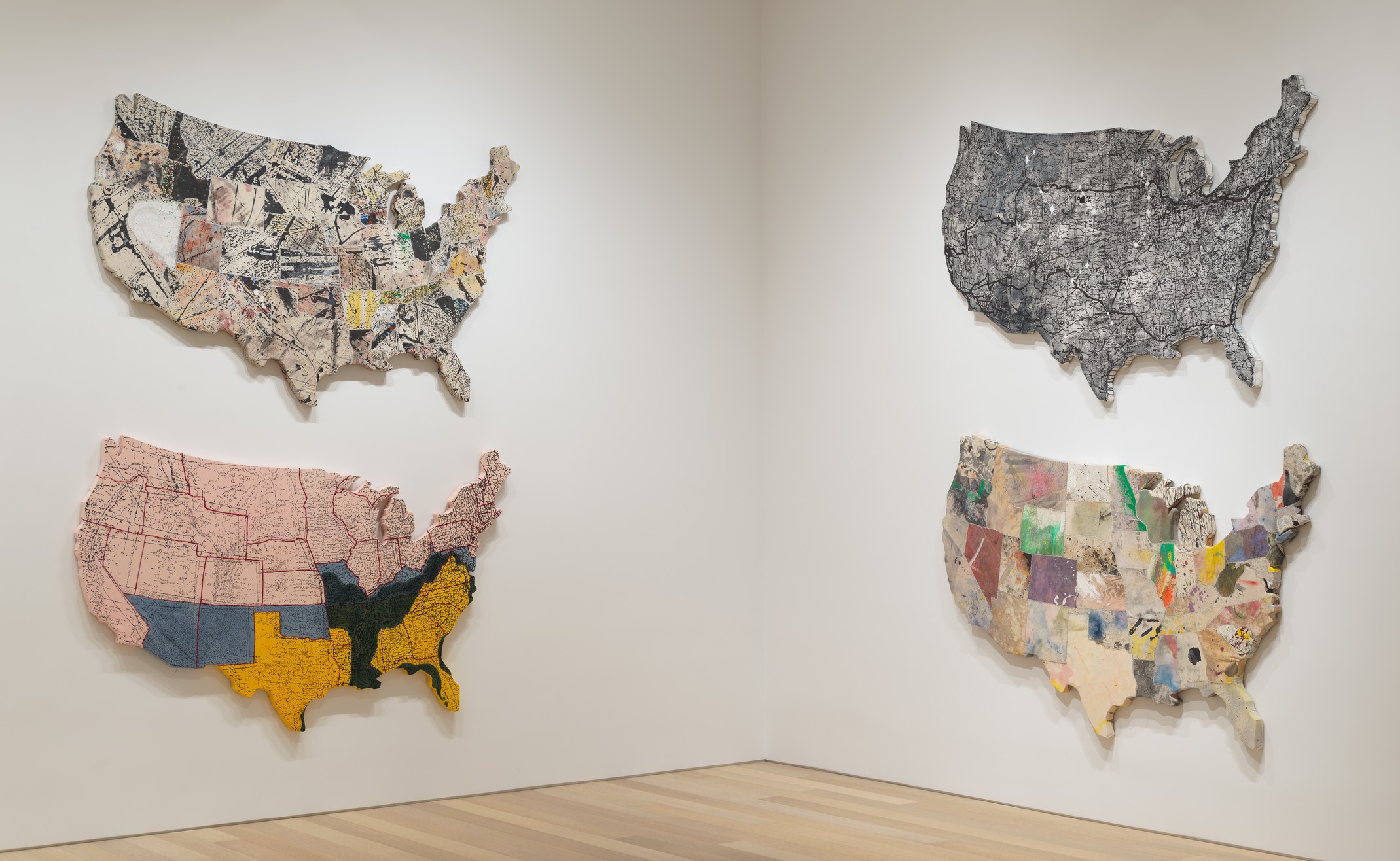 Never Remember—the exhibition title a biting reversal of the slogan “Never forget”—takes place in the very gallery where Jasper Johns’s map paintings were shown thirty years before. Lowman’s Maps expand on his own shaped canvases begun in the early 2000s, depicting doodled hearts, trompe l’oeil decals of bullet holes, and air freshener trees. Yet, while those earlier works reflected on the printed image, the Maps explore the effects of chance, gesture, and history, merging erratic splatters and stains with allusions to American quilt-making, Pop art, and politics. The works are produced by cutting fragments of studio drop-cloth into the shape of individual states and combining them. For the medium and small Maps, the states are first sewn together with a nautical-grade zigzag stitch and then stretched over canvas supports to form the general outline of the continental United States. Untitled (2013–15), the largest Map in the exhibition, is made up of fifty states on individually stretched canvases, each hung in correct geographic relation to the rest, with subtle gaps between the pieces like in a jigsaw puzzle.

Beyond being practical tools for navigation, maps are windows onto the construction of knowledge itself, revealing the political, religious, and personal factors at play when humanity seeks to represent space and time, self and other. Generations of artists have tapped into the conceptual and aesthetic power of mapmaking, from medieval mappae mundi to Alighiero Boetti’s embroidered maps made in active collaboration with Afghan artisans, which represent shifting subjectivities with regard to world order. 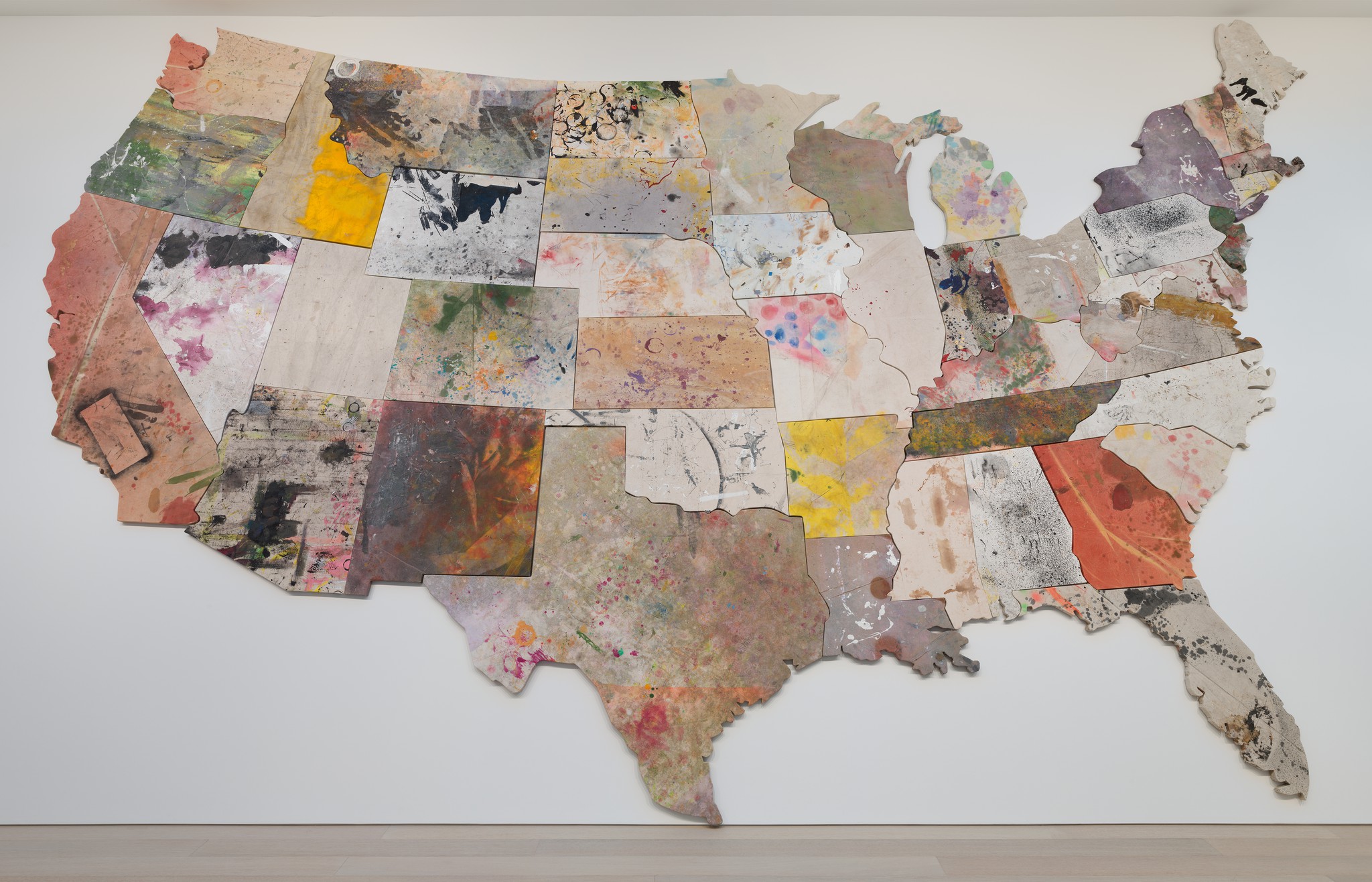 Lowman’s Maps infuse the geometries of the United States with a gritty, gestural tactility, combining chance and intention in the generative possibilities of a single form. With sharp political skepticism, Lowman employs abstraction to point to the arbitrariness of borders and the limitations of jingoism, thus expounding on the complexities and contradictions of the American way. 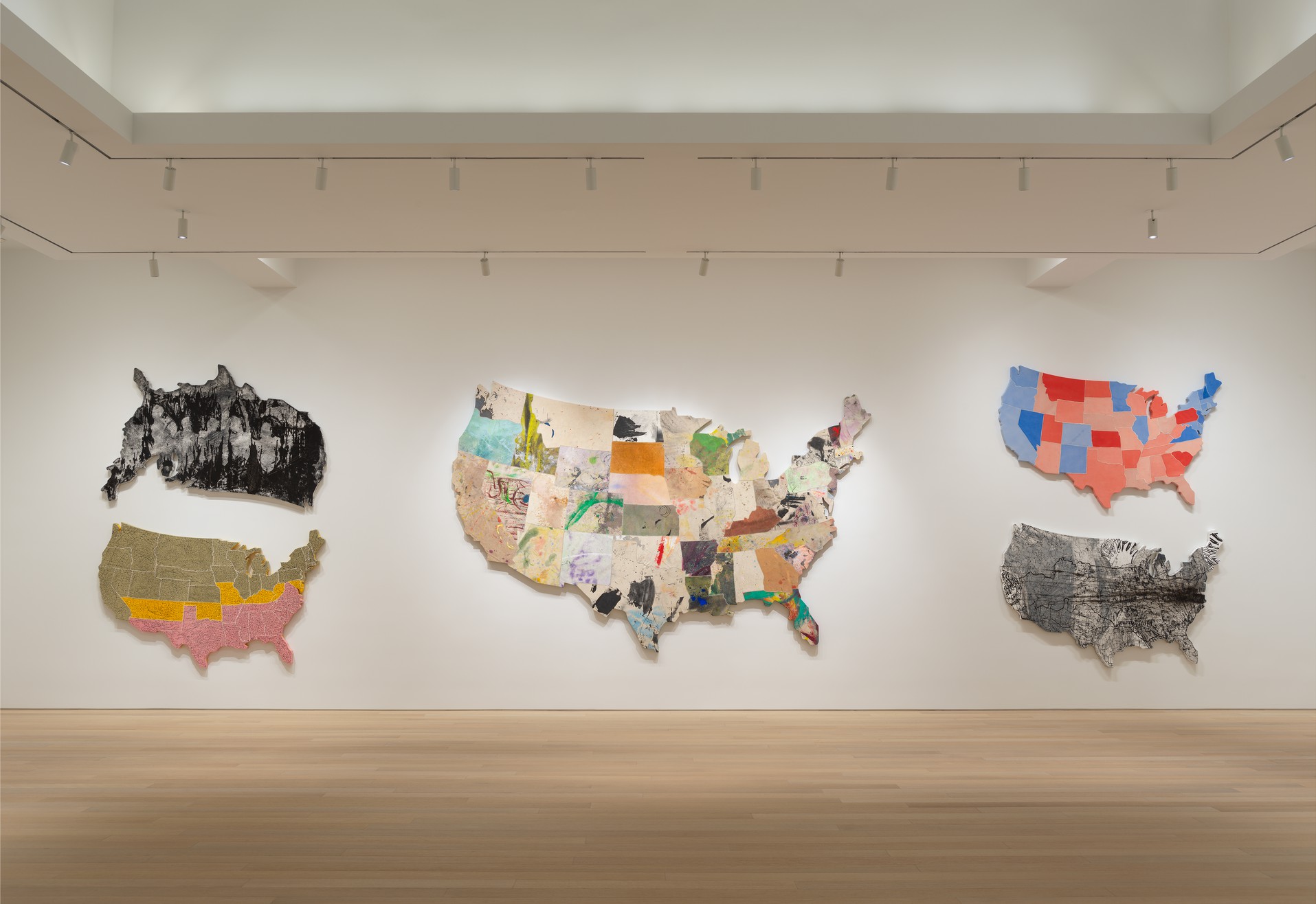