The ambitious exhibition Crude curated by Murtaza Vali for the inauguration of Art Jameel’s Jaddaf Waterfront Centre on the 11th of November 2018 has certainly shattered the prevailing commercial vibes that dominated much of the Dubai art scene since the 2000s.  Spread over all 5 galleries of the 1stfloor, Crudeis fundamentally an intellectual exploration of crude oil’s agency role in shaping the Middle East’s social, cultural and economic reality. Opening with a fragmented polyethylene title banner (a nod to the plethora of petrochemical products made available by oil’s discovery), the exhibition is archive heavy.  Allocating almost equal display space to straight-out archival documentations as to artworks inspired by archival material, Crudeis essentially an episodic narrative of oil history in the region.  Timely conceived, it encourages visitors to reflect upon historical nodes that affected and continue to affect the geo-political status of the GCC. 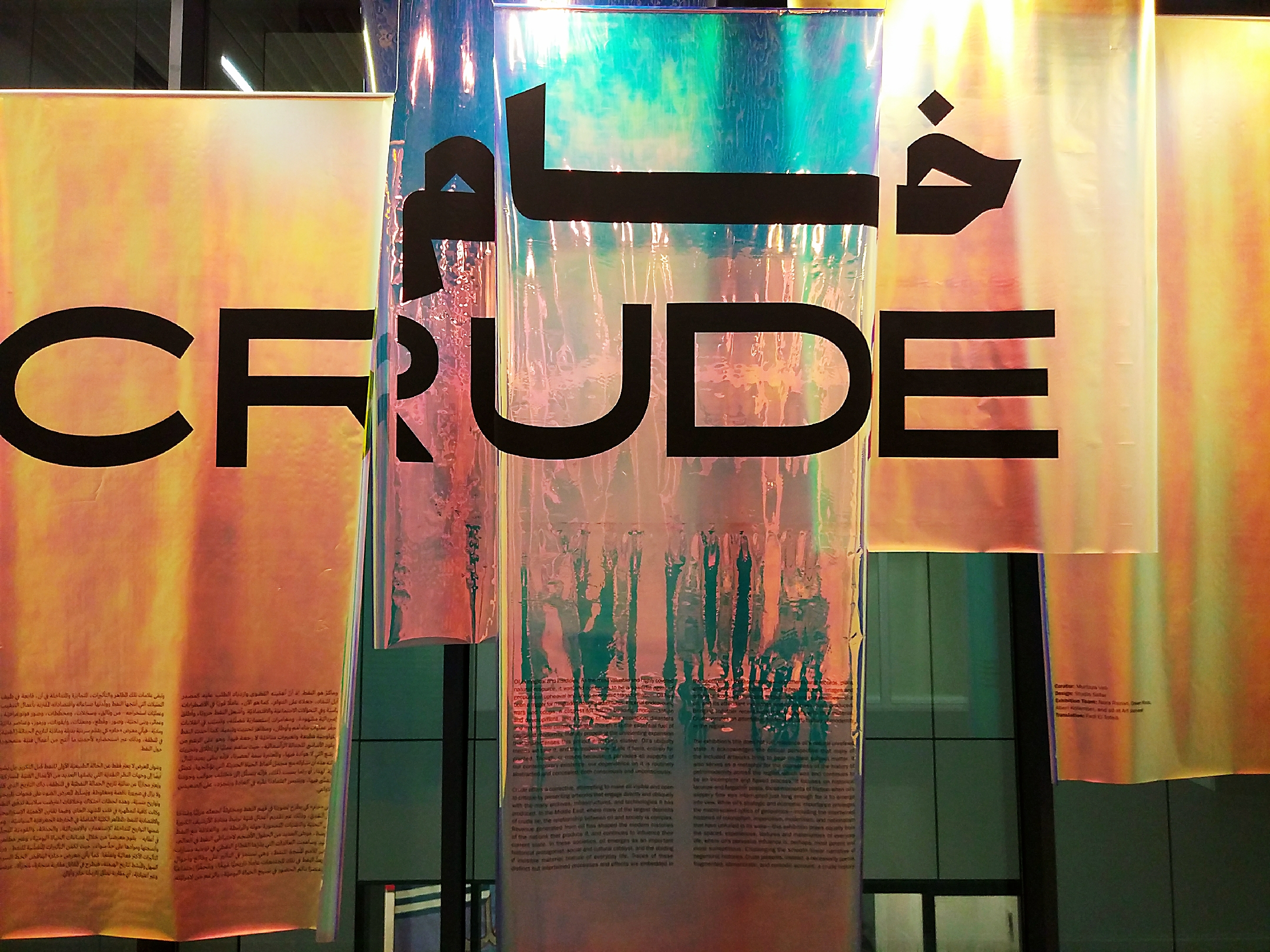 Despite Saudi Arabia and Iran’s political dichotomy, Vali successfully demonstrates their shared oil narratives.  He selected works that highlight the transformed but often exploitative nature of oil production across the region including countries like Iraq and Kuwait, to assert regional commonalities. In Gallery 8, archival photographs of Iraq Petroleum Company’s (IPC) designated photographer Latif Al-Ani taken of Baghdad between 1954 and 1961 that showcase the modernisation and urban developments taking place across the city, resonate with the Anglo-Iranian Oil Company (AIOC) archival documents displayed in Gallery 5 that recall the company’s unsuccessful efforts to produce propaganda films that hail the company’s positive contribution to Iranian urban development. 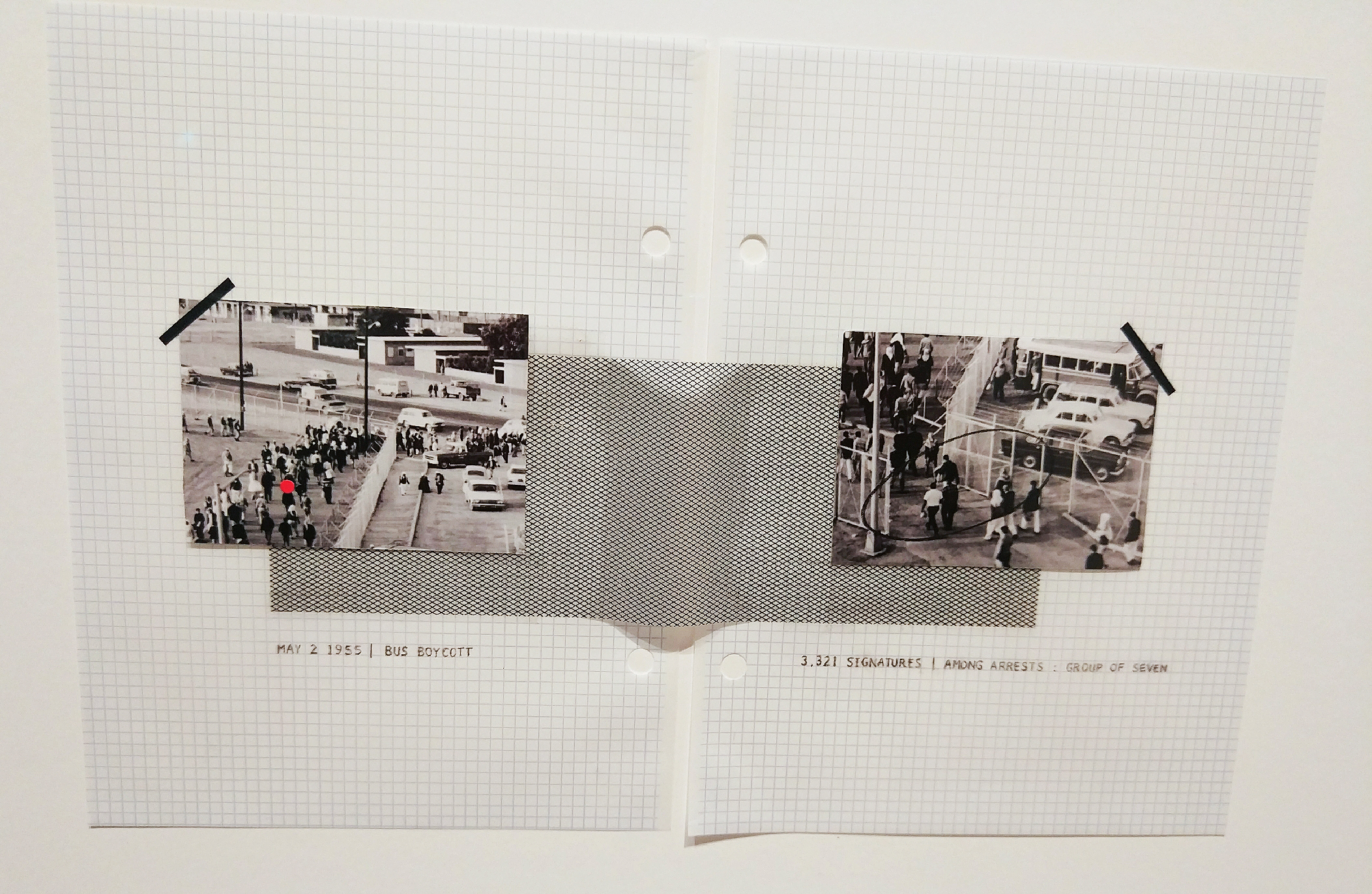 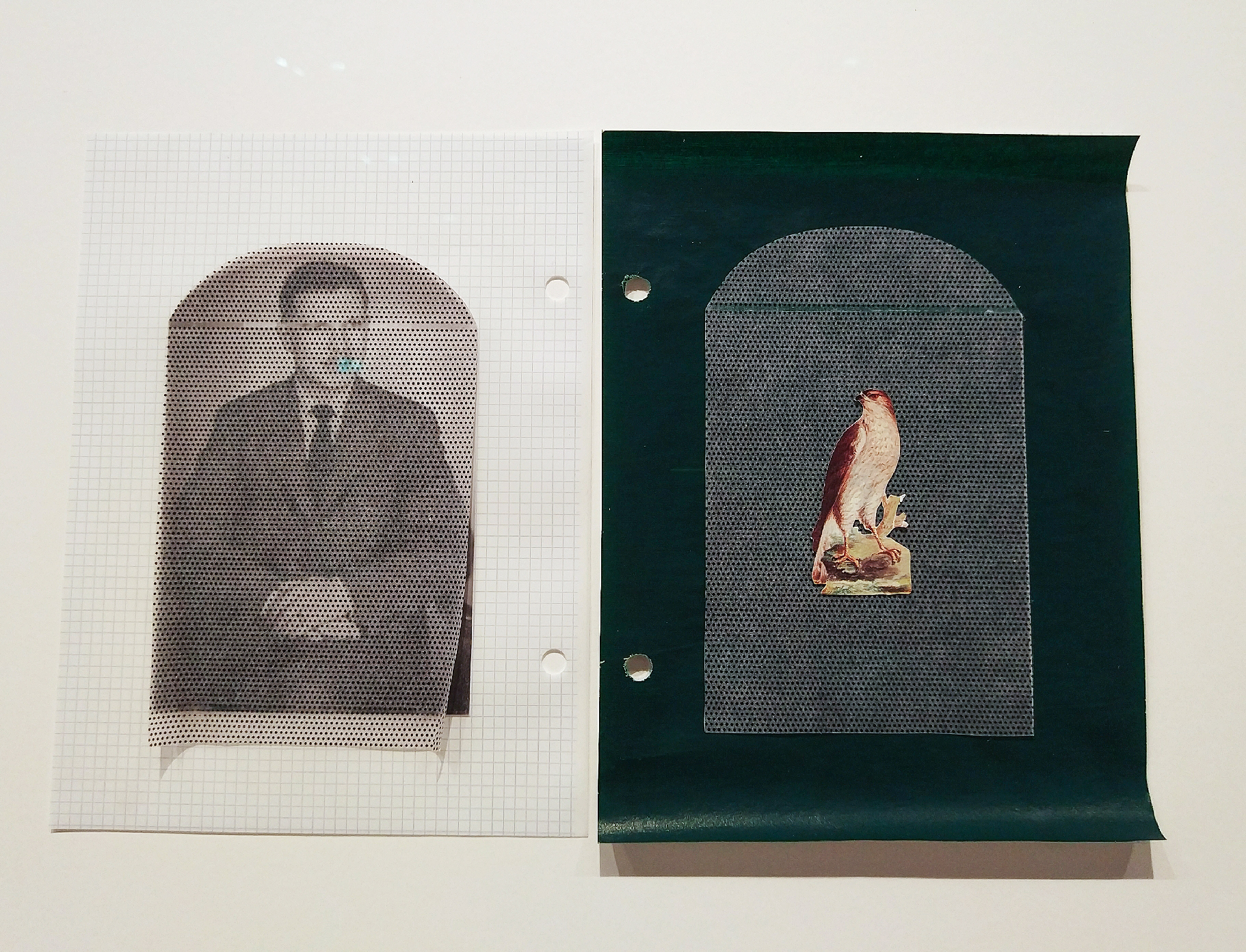 Another shared narrative that is subtly weaved between the displays is the colonial nature of oil exploration across the Gulf.  Strongly pronounced in Alessandro Balteo-Yazbeck & historian Media Farzin’s video installation Chronoscope 1951, the edited 24-minutes video of gathered film material from CBS TV show Longines Chronoscope demonstrates the vital role Middle Eastern oil plays in driving global foreign policy.  Video installations were one format of archival artworks that propel the colonial sub-theme to the forefront.  Another is the archive inspired collage work of Saudi female artist Hajra Waheed; The ARD: Study for a Portrait 1-28.  Within A3-sized backdrops, Waheed assembles fragments of archival material including photographs, geological diagrams and topographical maps to question the official narrative of ARAMCO that has been presented to the world by its unknown centre of information: The Arabian Research Division (ARD).  In fact, Waheed anchores her project to a “key artefact … an annotated copy of Brill’s Encyclopaedia of Islam… the Berkley-trained Arabist who established and ran ARD.”  The accompanying wall plaque states that the entry of “Djazirat Al-Arab” (Arabian Peninsula) continues to be a widely referenced text for the overall history of the region. Fitting with the contemporary global issue of Fake News and Fake Information, Waheed’s presentation of a global reference text that claims to be an objective account of the region’s history even though it was “strategically constructed to expand and protect the interests of ARAMCO” invites the exhibition visitor to reflect upon learnings of the region conveyed via mass media. 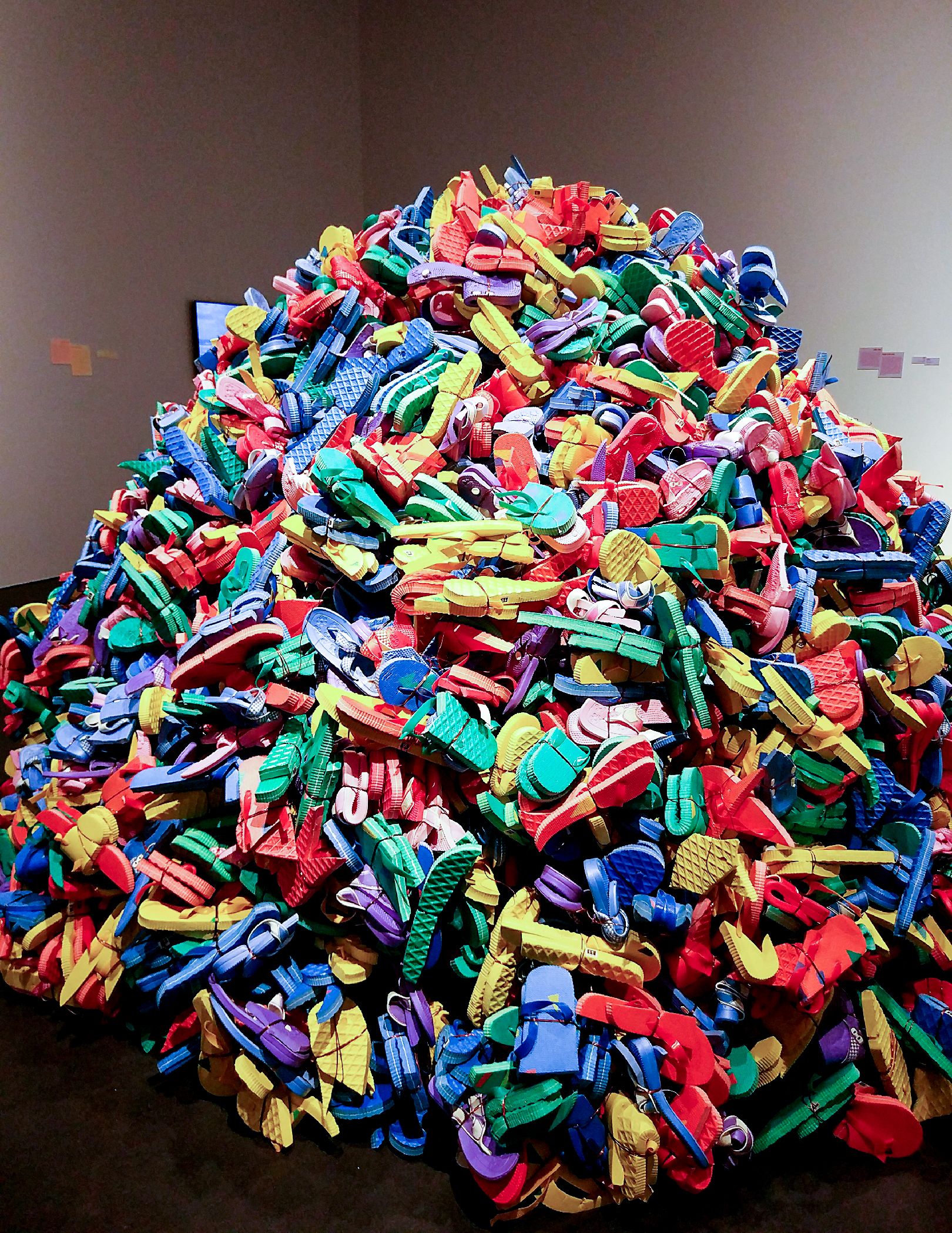 Through the 55 works on display, Crude investigates a discourse between 17 artists and collectives from the Middle East and outside it.  What it lacks in visual enticement, it makes up for in intellectual stimulation.  Perhaps the paintings of Houshang Pezeshknia, the modernist Iranian painter who also worked as an illustrator at AIOC between 1948 –1958, are amongst the very few works on display that can be admired for their visual aesthetic quality.  True to his signature style, both Untitled 1949and Untitled c.1958are portraits of sorrow oil refinery workers. His bold brushstrokes and angular lines that construct form are reminiscent of German Expressionist portraits that convey inner destitute and angst. The tempestuous colonial and social themes evoked by Crudeare offset by the equally urgent topic of environment pollution.  Manifested by Hassan Sharif’s 2009 Slippers and Wire, the colourful mount of neon plastic slippers is a cheery, albeit grave visual.  If it was not sitting in Gallery 7B which is entirely dedicated to Petrochemistry and Plastics, Sharif’s sculpture and Lydia Ourahmane’s 2014 installation Land of the Sun, would feel utterly out of synch with Crude. 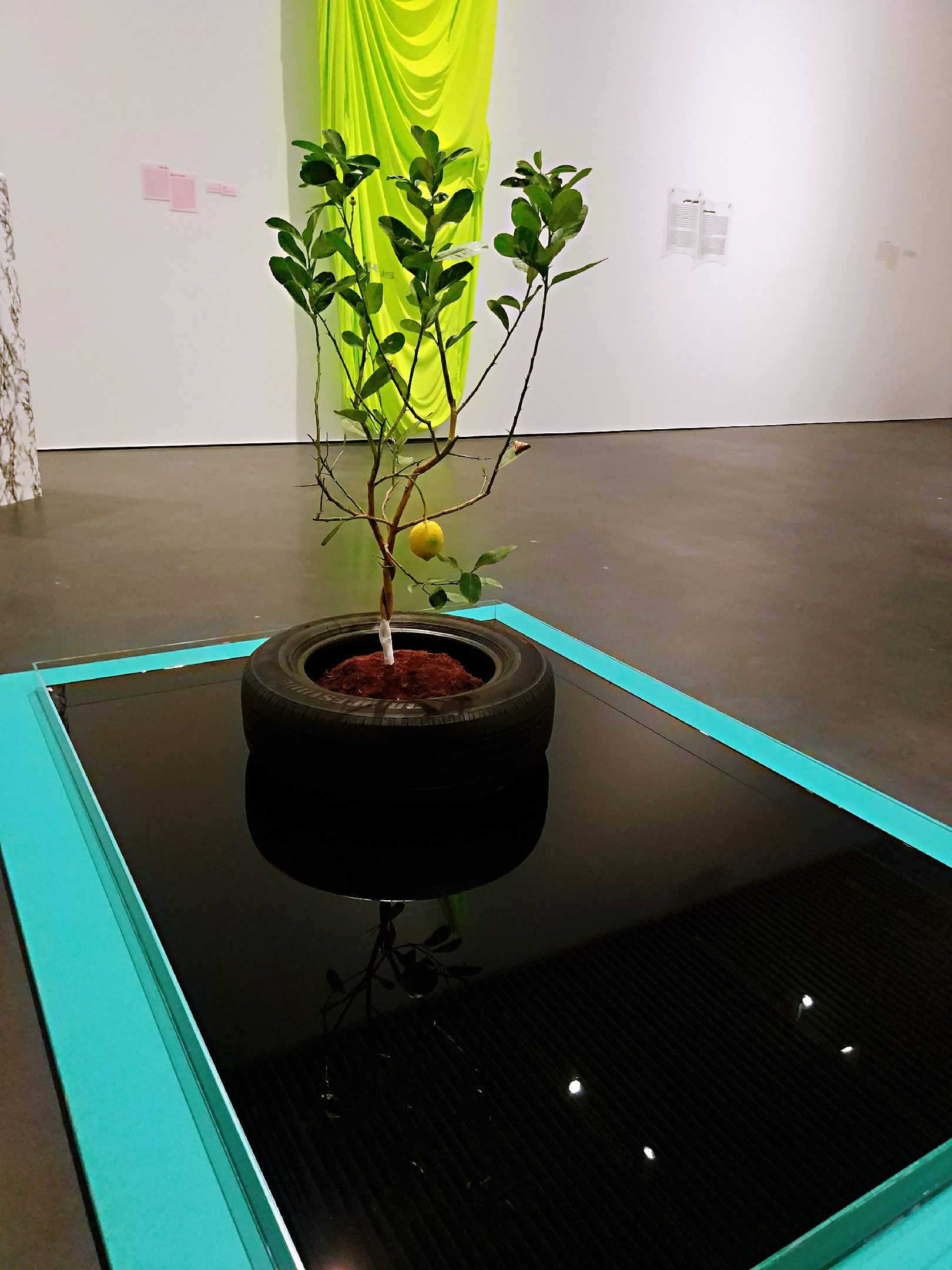 Launching a new art centre with such a challenging exhibition is a brave undertaking by Art Jameel’s Director Antonia Craver.  She emphatically stresses the scholarly nature of the centre and her focus on “the curious visitor”.  Whilst there is no doubt that Crudeis a rich and thought-provoking exhibition, its weighty themes and dense archival manifestation may prove to alienate many visitors.  Without a sound background in contemporary arts, the aid of the Gallery Introductions (which have proven to be very challenging to read) and the accompanying exhibition catalogue essays, Crudeis a hard nut to crack open.  But once opened it fuels an inspiring rush to learn and understand the history and geography of this turbulent region.