“All political and civil revolutions have been confined to a single country. The French Revolution had no country; one of its leading effects appeared to be to efface national boundaries from the map “ 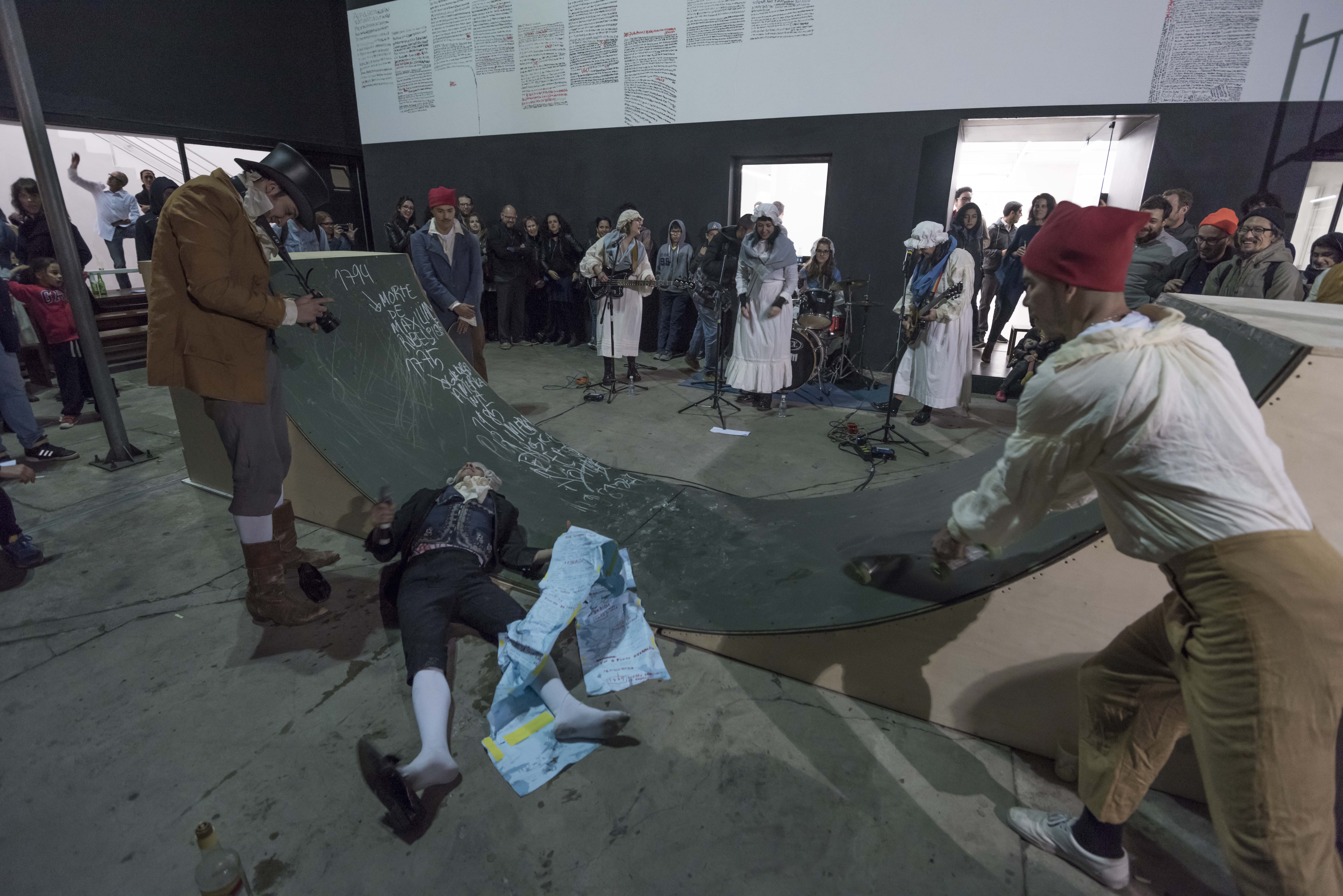 For the young Brazilian performer, Guilherme Peters, the French Revolution, an event marking the beginnings of modern democracy, is one of the main axes of his work mixing politics, history, culture and art. Like a catarsis faced with the social difficulties of Brazil, the performances of Guilherme are powerful, energetic, extreme as in his last performance “Estudo para Festival ao ser supremo” divided into two acts. In the latter, he wears a costume similar to that of Robespierre, a French politician of the eighteenth century. The first act, the artist reads a document on the French Revolution on a skateboarding platform and stops to drink a glass of alcohol to find himself on the verge of unconsciousness as a symbolic death in the face of struggle patriotic. The second act is characterized by a band dressed in sans-culottes costume, popular protesters advocating democracy. They play an air of “Charlotte killed a guy” (in reference to Charlotte Corday famous for murdering politician Jean-Paul Marat) as a shout. Guilherme Peters being on a skateboarding platform, declares taking back possession of the public space because “Let’s give to Caesar what belongs to Caesar”. This work is an allegory to freedom guiding the Brazilian people as Eugène Delacroix did in the nineteenth century. 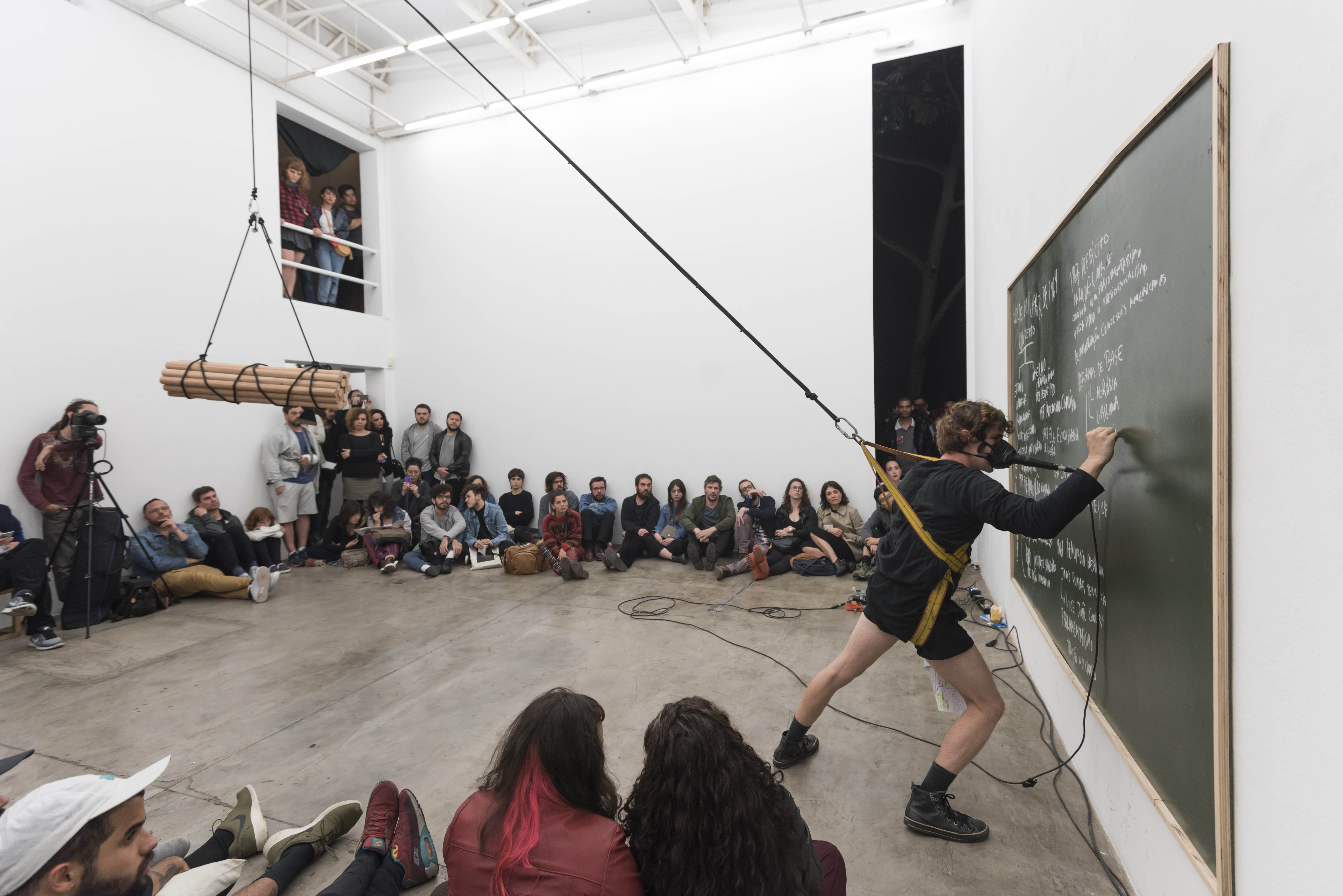 Guilherme Peters protests and provokes the viewer to the weight of history challenging past defeats and victories. In “Self portrait with Roosevelt, Lenin and Hitler”, he puts himself in the place of the apprentice, as a young man, linked to the three emblematic characters of the XX century. On oxidized iron plates, the faces of Roosvelt, Lenin and Hitler represent three ideologies that shaped the century. The portrait of the artist is between them. For Guilherme, youth is a troubled step where the individual is built or deconstructed, like our society. Youth is a stage of resistance. At the Verbo Festival in the Vermelho Gallery, Guilherme Peters in “Escola sem partido” writes on a chart the events of 1964 perpetrated by parliamentarians – deputies and senators – involved in corruption cases in 2016. He wears a gas mask like a muzzle. His breathing is difficult. He fights against the weight of poetic and ideological indoctrination represented by a heap of logs suspended from its opposite and of which it is attached. Every gesture to continue to write, to express oneself, to think is a fight. At that time, censorship was appropriate in the classrooms and freedom of expression was destroyed. In the face of current scandals, Guilherme expresses his fear that these Machiavellian policies will be repeated if the Brazilian youth does not remain attentive. 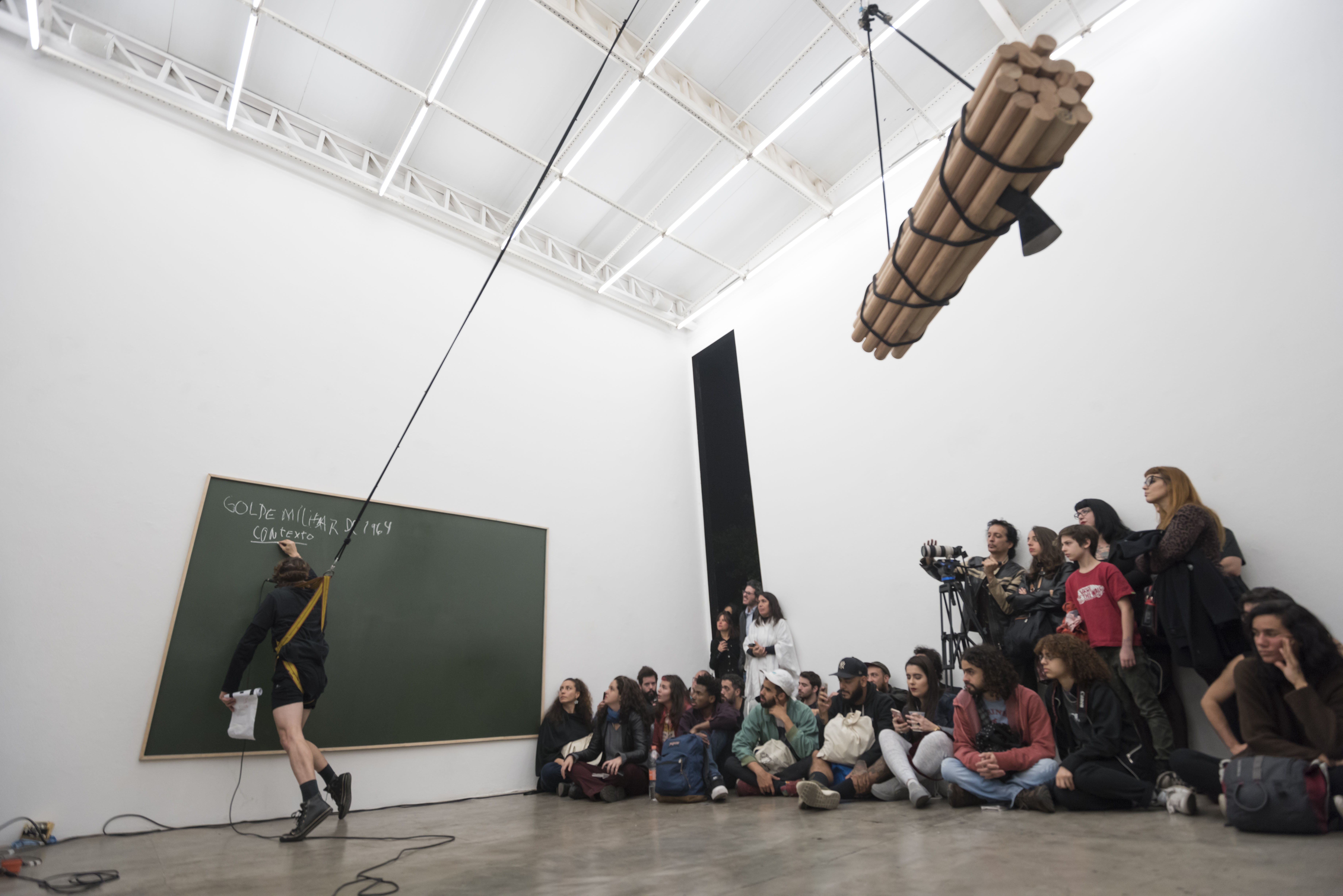 Finally, the contributions of Guilherme Peters help to understand the present and perhaps to trace the contours of a future by reinterrogating and interpreting the past with the knowledge acquired. The actions of this young artist reposition the moments when major changes occurred. This sometimes gives a feeling of “déjà-vu” and at this time T, a choice is required.