A coversation with Andreas Emenius. The image is the thought. Not the words.

A coversation with Andreas Emenius.

Andreas Emenius is interviewed by Editor in Chief Alice Zucca

“The image is the thought. Not the words. […] I don’t really question anything around me.  All that flows through me is the stuff that becomes the image”

The versatile expressive universe of Andreas Emenius transforms, through the use of several mediums, recognizable elements of everyday life into a reality which, although it is still accurate, somehow appears more profound and feels in itself estrangfed playing on a perceptive ambiguity. To perceive the environment around us for what it is, for how it exists inside a defined space and at the same time how it is stored in our memory and how it could be interpreted through the personal experience. The investigation of the antithetic relationship between observation and perception is an element frequently present in his artistic research which often explores the contradictions present in a multifaceted reality that, in the end, finds a balance in a more comprehensive view and in the authenticity of its every, and not always coherent, defining nuance. An object, a neighborhood, a face, the trajectory of a movement can all be the means by which the image is generated and as such it can be inquired. “The image is the thought, not the words” Emenius states, every object is waiting to be looked at, as an image it could be named, acquire an identity, and indeed be interpreted on many levels in its coherent contradictions. And it’s always the image the expressive vehicle and its many ways of showing itself to us, it could be a static image, like a painting, or in motion as in a video. Artist and polymath, Emenius investigates form and abstraction through painting, sculpture, performance, graphic design and video. He is also curator and co-founder of the Nordic Contemporary Artspace an artistic platform and a catalyst for Scandinavian contemporary art. He worked together with various artists such as musicians Trentemøller and August Rosenbaum, directing their videos and designing their sets; prominent graphic designer Neville Brody; stylist Henrik Vibskov and important brands like Kenzo, Adidas and Nike. 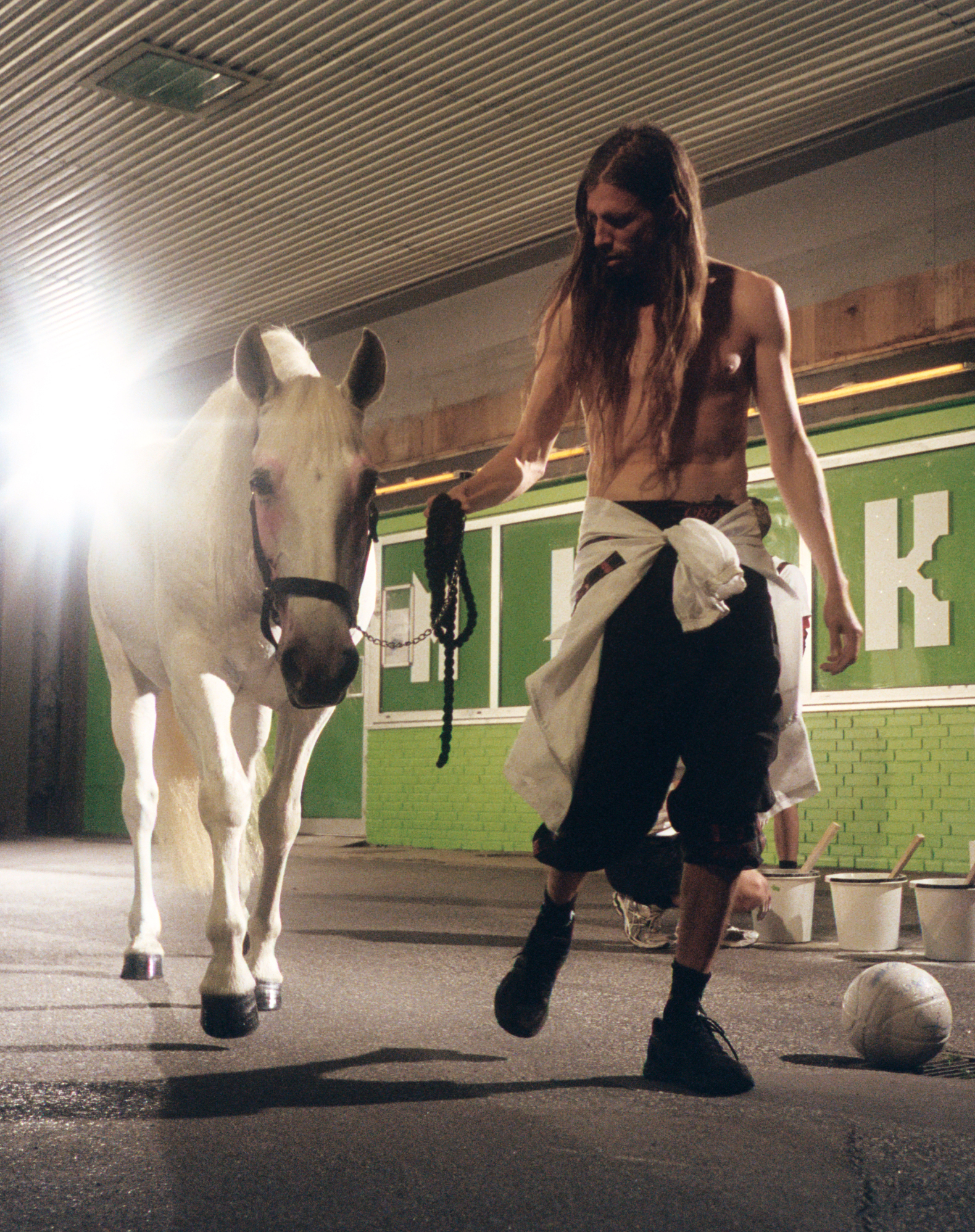 Andreas Emenius, COMING BACK FROM THE GAS STATION, performance

Different art forms such as painting, sculpting and video art can be used to express the same themes and the versatility of your creative process is a key element in your artistic work. Is your interpretation of reality more of a gesamtkunstwerk where every discipline is interconnected or is it more a question of finding the right vehicle to express your message, your vision and your perspective in the most effective way? Does your creative approach change depending on the medium you use or do you keep the same underlying intuitive rigour in everything you do?

I’ve always liked the idea of Gesamtkunstwerk, how things blend into each other and makes a whole. For me everything starts with drawing then moves on from there. I spend a lot of time looking at things not related to art (science, sport, news, films). I’m obsessed by faces, how they look back at you and physical movements and everyday objects which seems anonymous at the same time meaningful. First comes the thoughts then associative and intuitive work. No matter the media If it makes sense for me then I will just do it. There needs to be an intensity. A sense of an opening. I work fast before the work loses its urgency. What I am looking for is soul, presence and that the work has ambiguity. 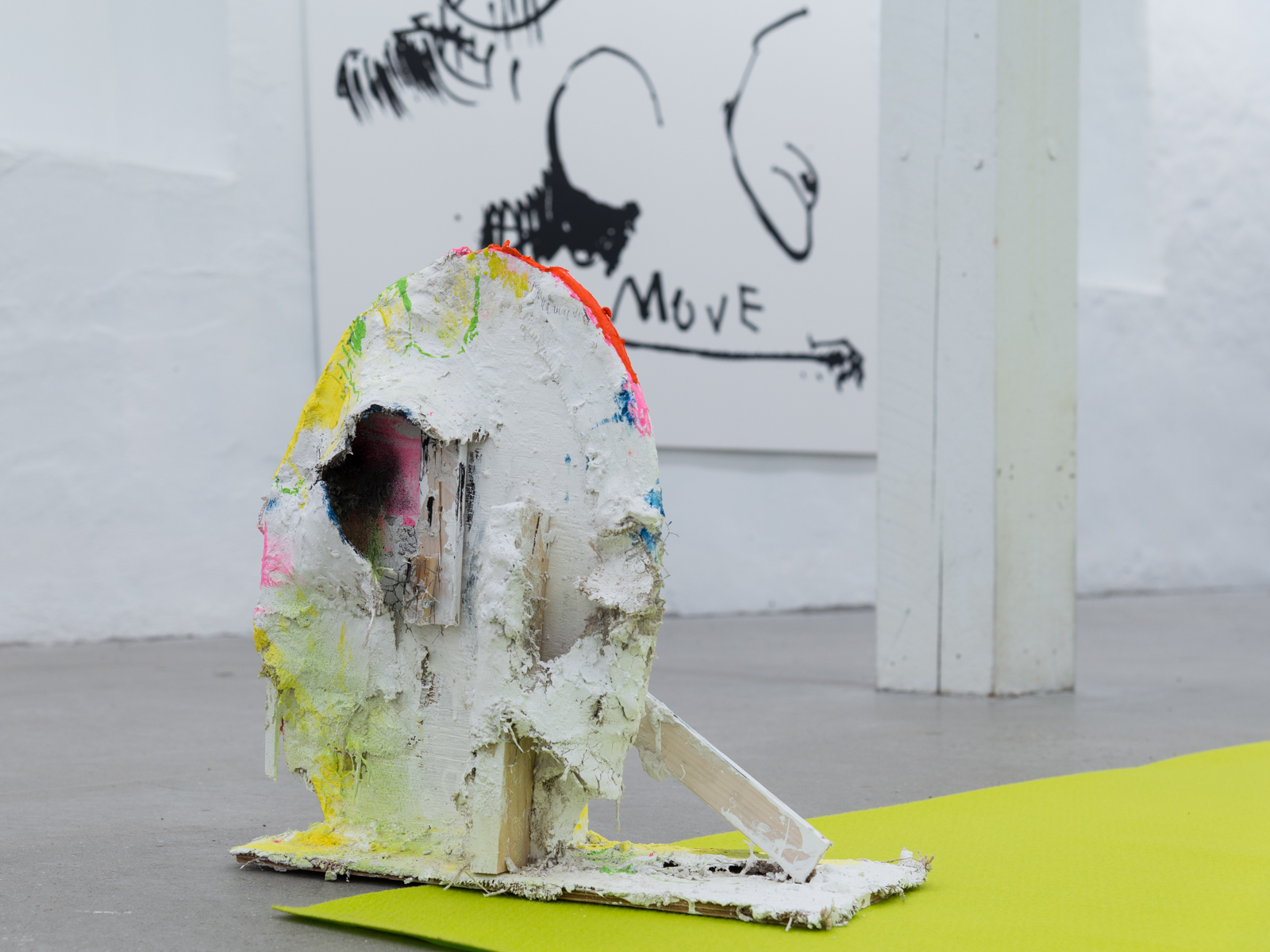 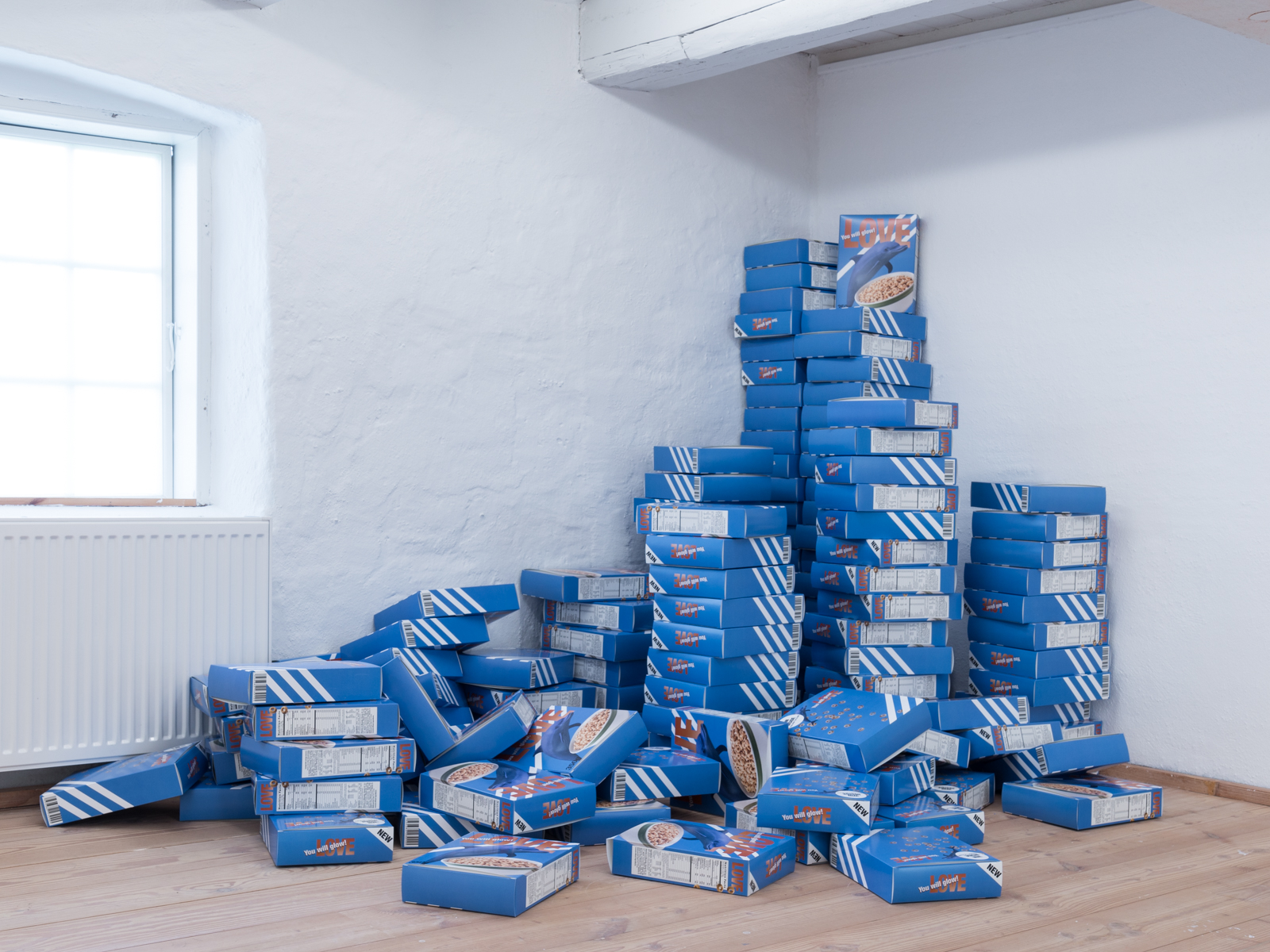 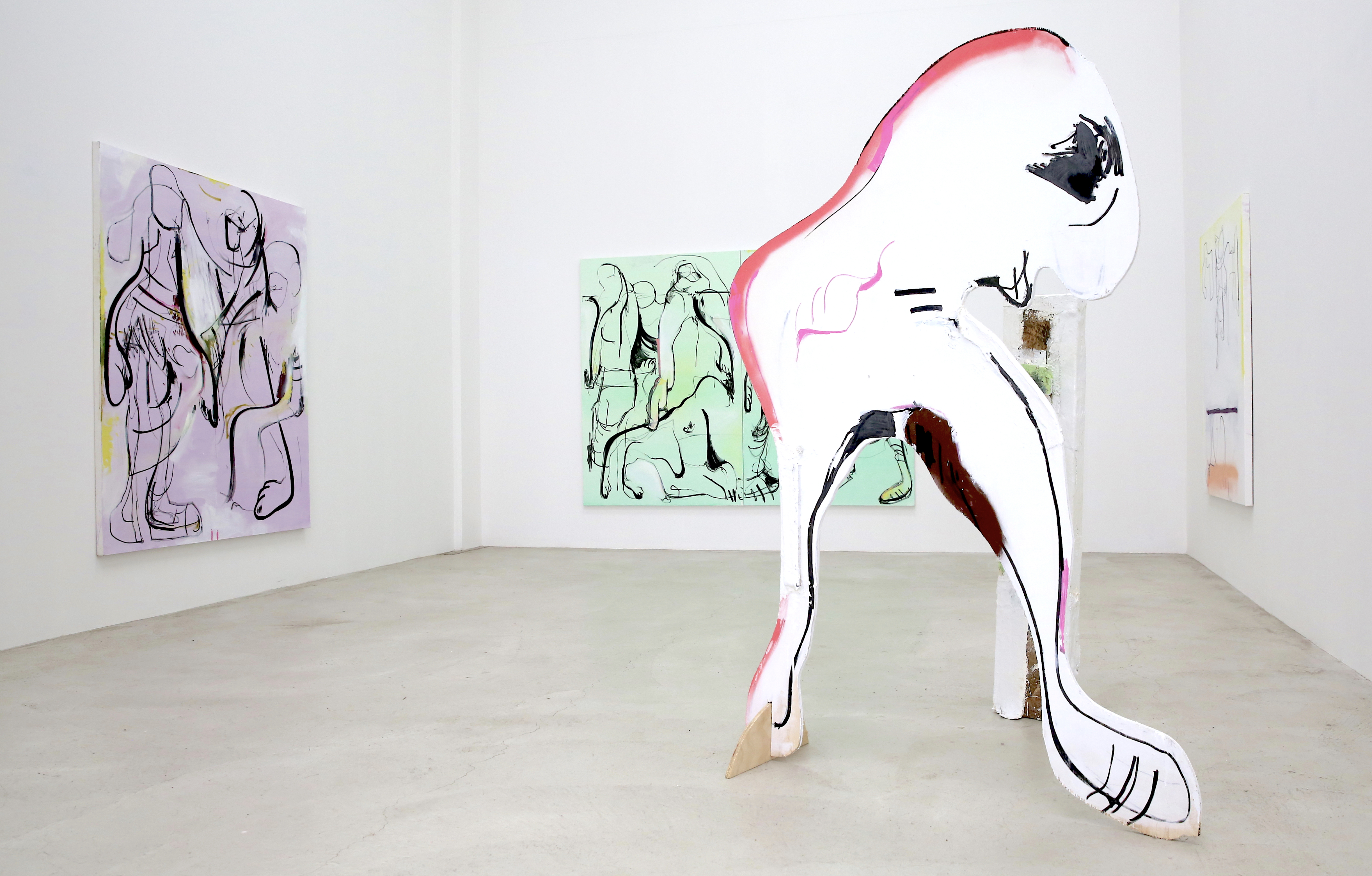 When we take our abstract understanding into the real world what we get is not an hypothetical vision of reality but the virtual result of what we comprehend perhaps in combination with the imaginative space we activate in the process. I am thinking about how you translate your experience in Chinatown in your work “Muscle Memory” at shin gallery through the use of a visual universal language, which in itself has something that relates to the background of each of us and goes beyond its environment.

The way in which our perception is translated into our understanding is present in an element of familiarity and estrangement at the same time, that is implicit in the way we recognize shapes, archetypes, that are subconsciously part of the collective memory of a generation, and which activate experiential sensations. What shapes the world we live in, the human element, the urban scenery and even fashion, leaves traces of life which can then be identified and, filtered, and they become references and traits of the different cultures and environments we find in the world. The neighborhood becomes a dynamic force, alive, and through the ways it portrays itself it can often raise questions about day-to-day urban life, about the way we plan, build, consume and live our lives and our cities.

Could you talk about this characteristic of the installation? And what about your experience as a Scandinavian man in New York City?

I agree, all the traces of life are there to give reference. But I don’t really question anything around me. All that flows through me is the stuff that becomes the image: thoughts, something I read, a screenshot of a bird, a face in the street, a logo, coca cola, memory of where I grew up… it all comes from the inside in the end. You select what somehow connects to try to get as close as possible. Like a direct connection to life. Feelings before the intellect. There’s more truth there. Of course, there are ideas, but I’m more interested in trying to be honest. The strange difference of the image of life and the experience of the environment you’re in. There’s a friction. Art is a space where you can exist, to think, and let all your (dark) thoughts about life, death, sex come to surface. 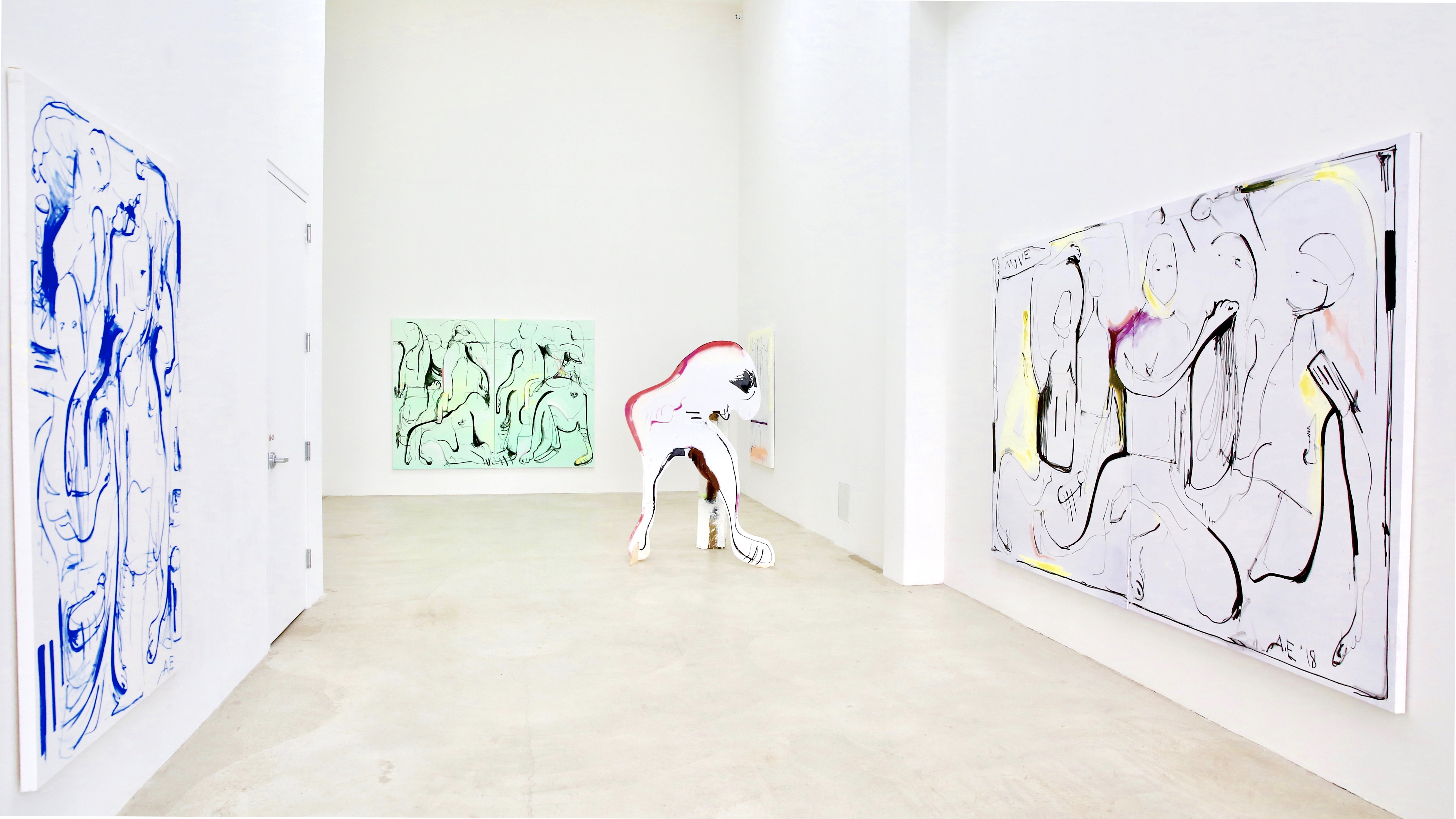 Is there a common thread in all your projects? Can you talk about the themes that are fundamental to your work?

I found myself explaining less and less. The image is the thought. Not the words. The installations are made associative with a variety of references, hopefully they appear with synchronicity. Many paintings are kind of portraits, of people I see, meet, remember. I like to add everyday items, like cans of red bull, trainers, keys, luggage, swim suits with some references to popular culture, sport or locations that affected me in some way. Then make them appear more mythical – like demi gods – looking at the other world. The idea is seeing familiar things you can recognize that disappear into strangeness. And back again. It’s about balance between the near and the distant, or the clear and the foggy. I just really like things that seem both solid and disappearing at the same time, both heavy as concrete and light as a feather. Both low culture and fine culture. Both every day and otherworldly. 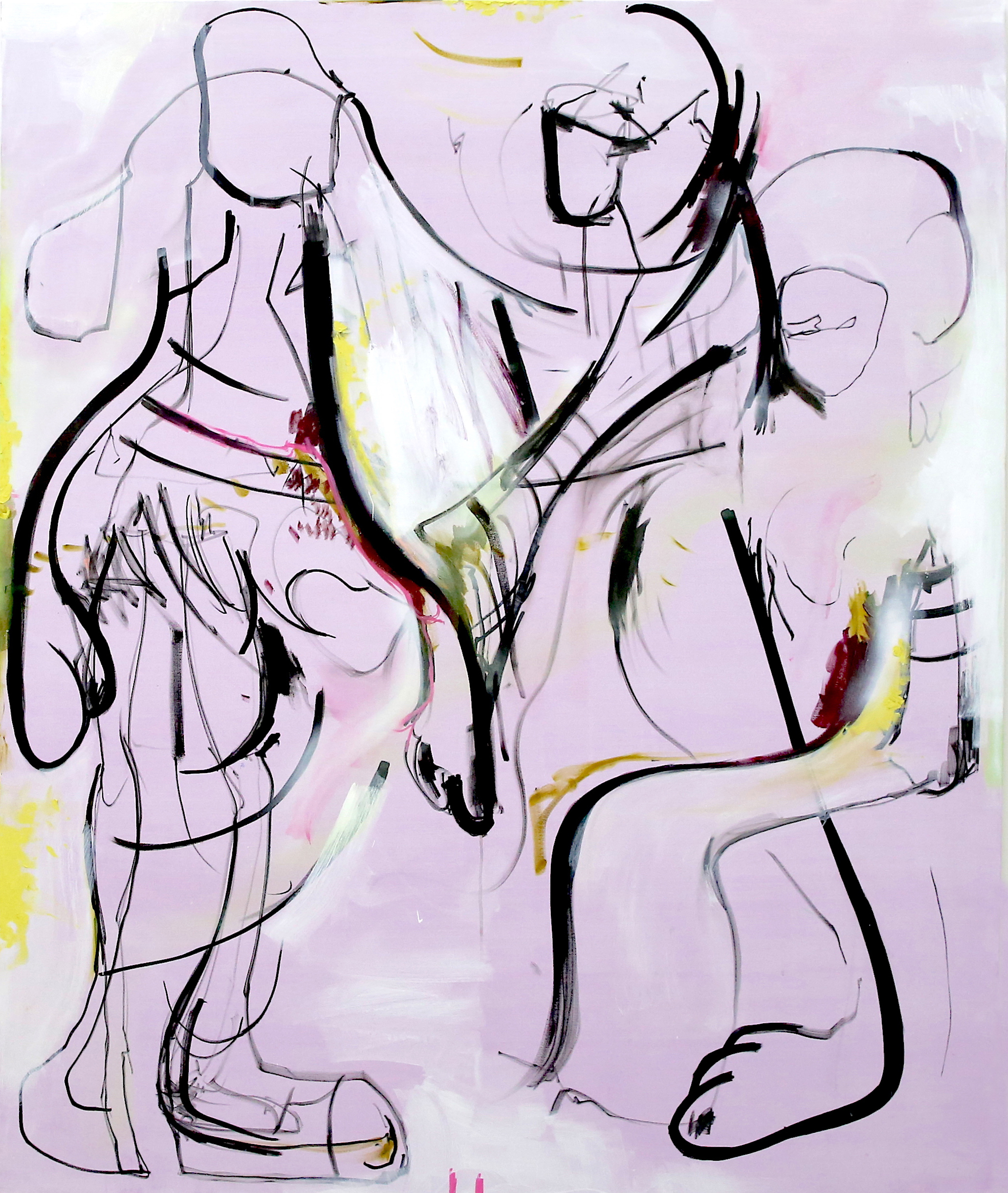 In the age of Access, a time when it’s hard to put artists in a box and in a definite artistic framework that fully describes them, you chose to co-found and to curate a space, the Nordic Contemporary Artspace, where artists and artworks are associated by a very strong common trait: their origins. An actual map of contemporary Scandinavian art. Could you tell me more about this project?

I co-founded Nordic Contemporary with Jacob Valdemar as a window to show artists we like from the Nordic region. I am Swedish so it made sense to put a geographical frame around it. There are so many great artists coming from this region. We wanted to give a platform as well as to see how turning our backgrounds and the environment we grew up in into the focus point would appear in Paris with its heavy art history environment. 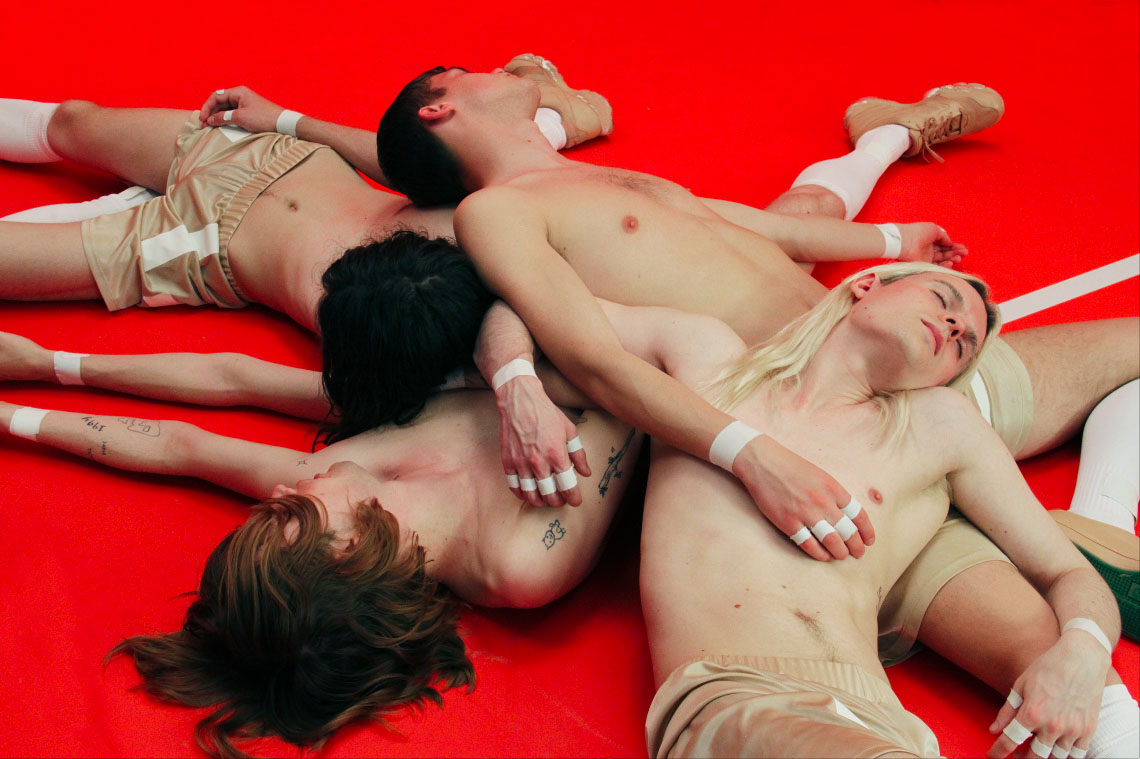 Performer, filmmaker, and director of short films and music videos, you also worked with Trentemoller and August Rosenbaum. In “Nebula” I feel the research for a pure synchronization between images, sounds and movement. Do you believe there is a component in the rhythm of electronic music which is able to emphasize this concept?

I love the repetitiveness of putting your hand down on a table over and over again, hitting a tennis ball for an entire day or playing the same tone on a piano for what could be forever. When I work I constantly listen to the same album for months. In Nebula you see a figure moving in an abstract sport arena. I liked the idea of comparing athletic movements with something more animal like. That it’s me in the video of course has significance but not more than it gives it intimacy. I thought of the figure as a caged animal while doing this. The other part of the video is about baptizing and transformation with water and milk being materials I use a lot. I am proud of this work however I feel I wasn’t brave enough in the structure of it, it still feels a bit too narrative. My dream is to make video into painting and vice versa.

Among your many collaborations I find very interesting your partnership with Henrik Vibskov, can you tell me about “The Fringe Projects” and “The Circular Series”?

I met Henrik when I was at school at Central Saint Martins, we connect in our way of seeing things, our references and fast production method. The Fringe Projects and The Circular Series we made mostly in 2007/2008. They are 10 works per series, sort of experiments where we use a signifier such as a fringe or a circle as ‘visual glue’ connecting the works, where we could allow our self to play and clash among ourselves, our background and our identity. In many ways it was a fun environment where we made work we couldn’t have done either of us by ourselves. We are still waiting to complete the Circular Series. So, stay tuned. 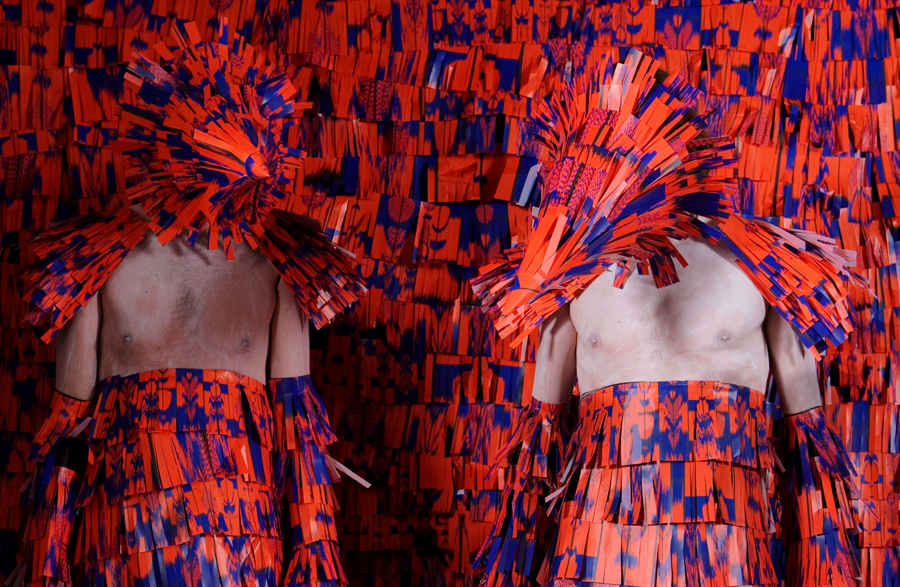 Henrik Vibskov, Andreas Emenius, The fringe projects, Self portraits. Featured inside and on back covers of Japan issues of Dazed and Confused and Nylon Magazine. 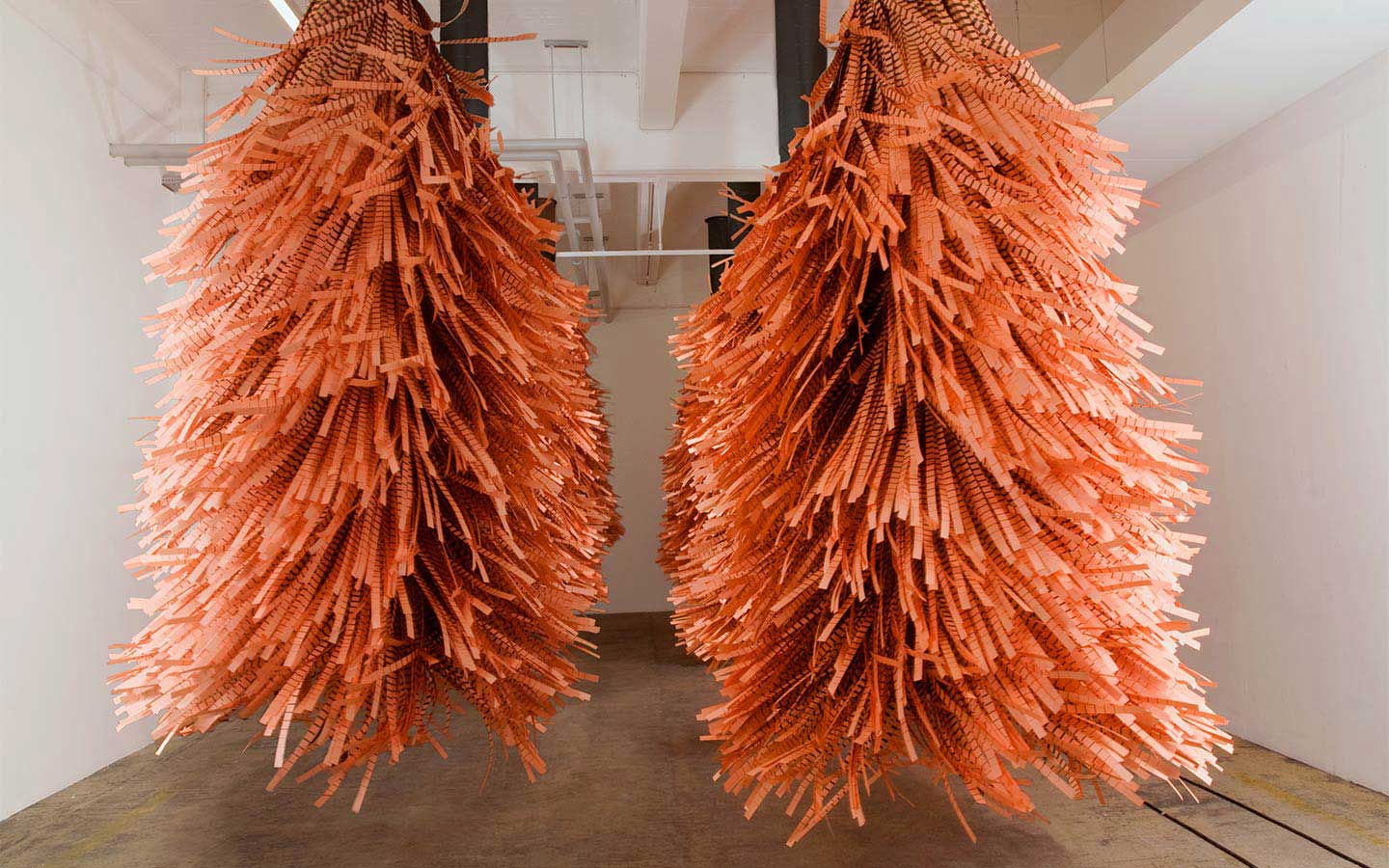 Could you give me some insights about your approach to your imagery of movement both in your film production and in your paintings?

Physical movement to me is important. In boxing, the way an elbow seems to move instantly yet with precision; a person’s shoulder appear more ‘hanging’ as their mind is drifting; a horse’s nostrils opening and closing after it’s been running; my memory of being a teenager, half sitting against a wall how my knee seemed to be moving though the leg was in a still position. I impose these details, or the idea of these details onto figures I paint or in characters in a performance. The photographer Edward Muybridge, the sculptor Umberto Boccioni and painter Francis Bacon are my movements heroes. 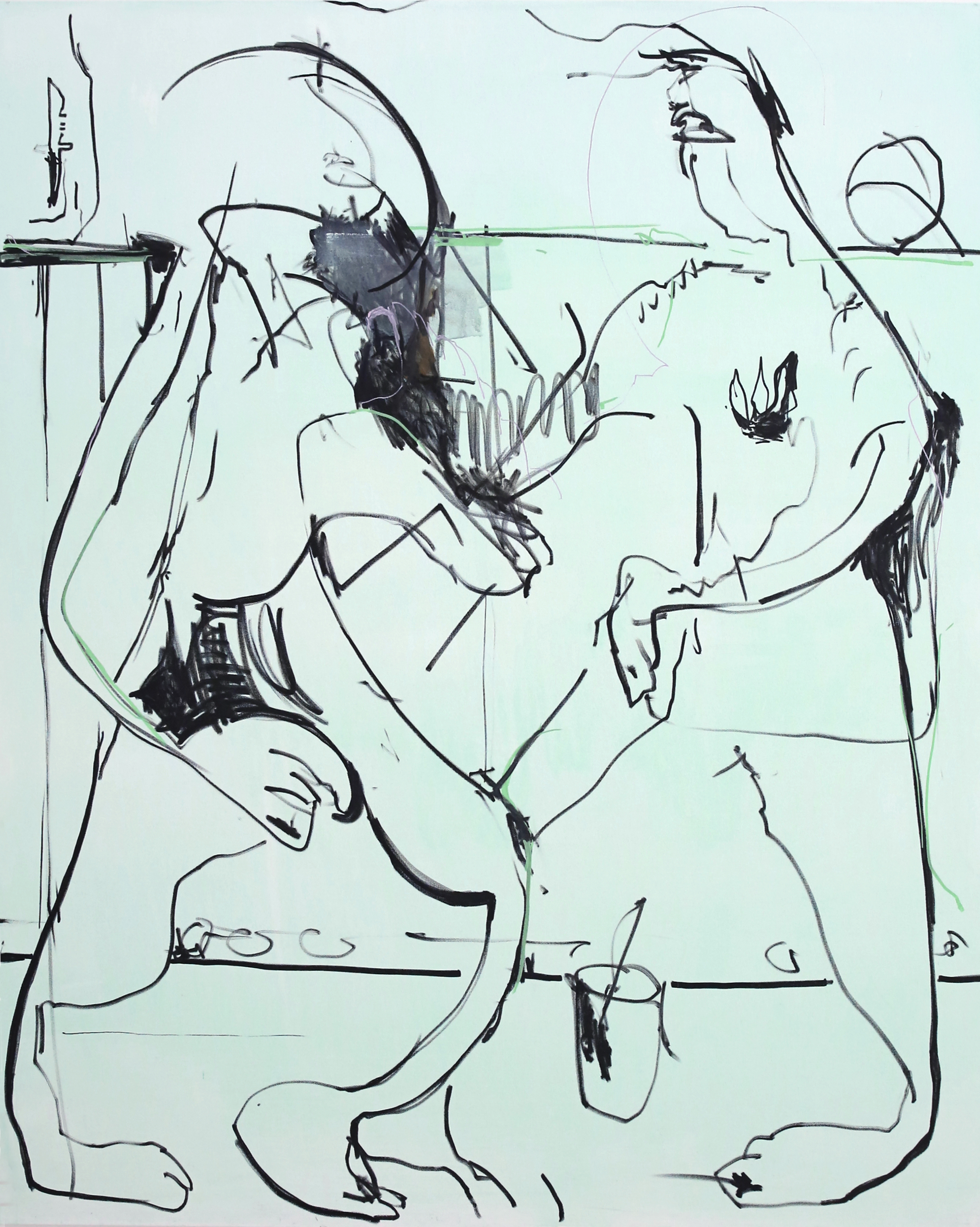 Are you working on something at the moment? What are your future projects?

I am working towards a solo exhibition at Nikolaj Kunsthal in Copenhagen that open in 2019. Performance that will be staged every day for five months in an installation consisting of sculpture, paintings and sound. I am also working towards some smaller painting projects that opens in New York in November at the Palace Hotel.