Artist: Anthea Hamilton  / a is for… and, am, anxious, apple, adore / at Kaufmann Repetto, Milan

Anthea Hamilton’s work weaves complex symbols and narratives, bringing together references from architecture and design history to personal themes via fashion and popular culture. Her sculptures and immersive installations, such as the one currently on view at Tate Britain for the Duveens Commission, are often animated by performances that involve and activate the public as much as the space. The exhibition presents a new body of work that expands recurring themes in Hamilton’s oeuvre. 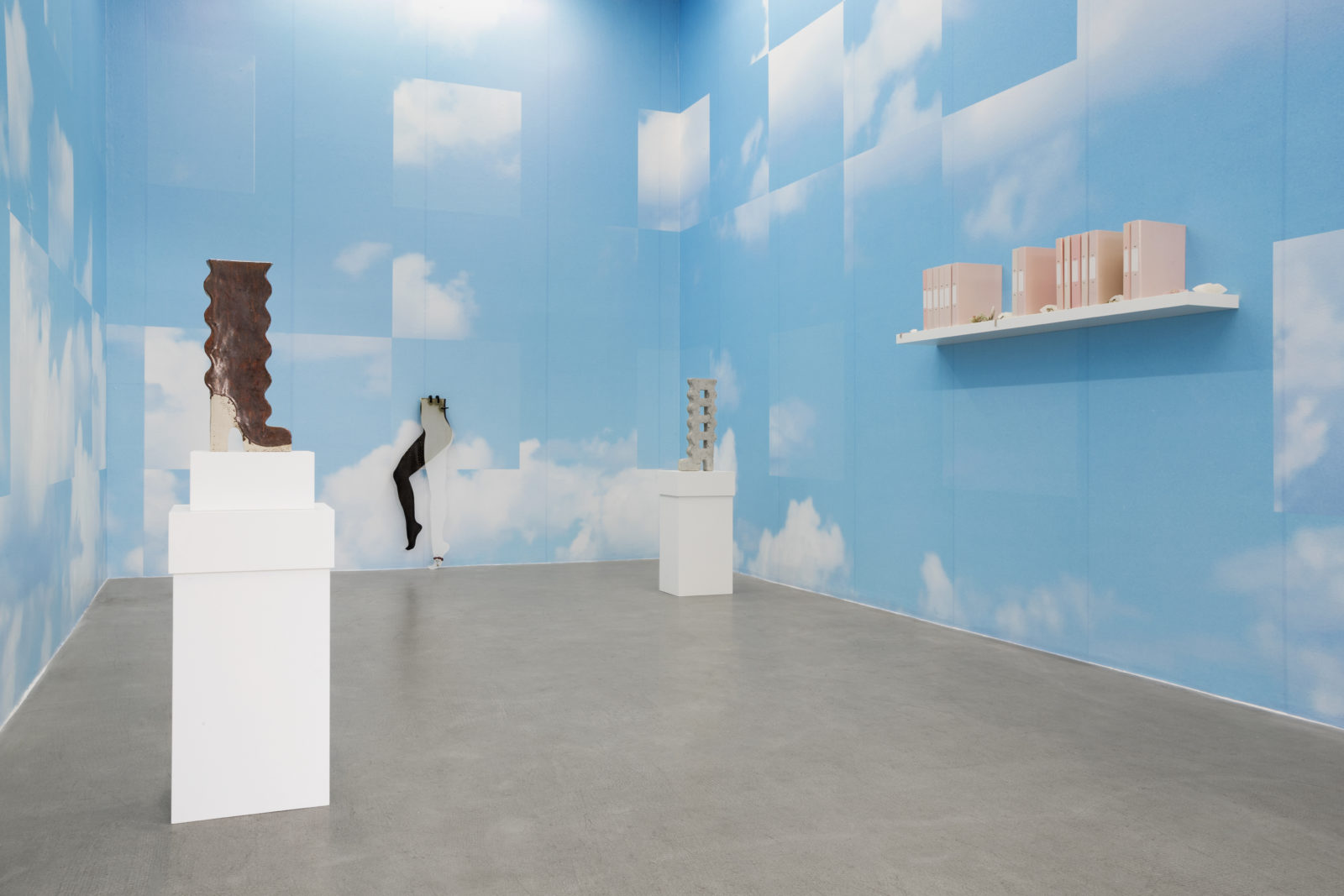 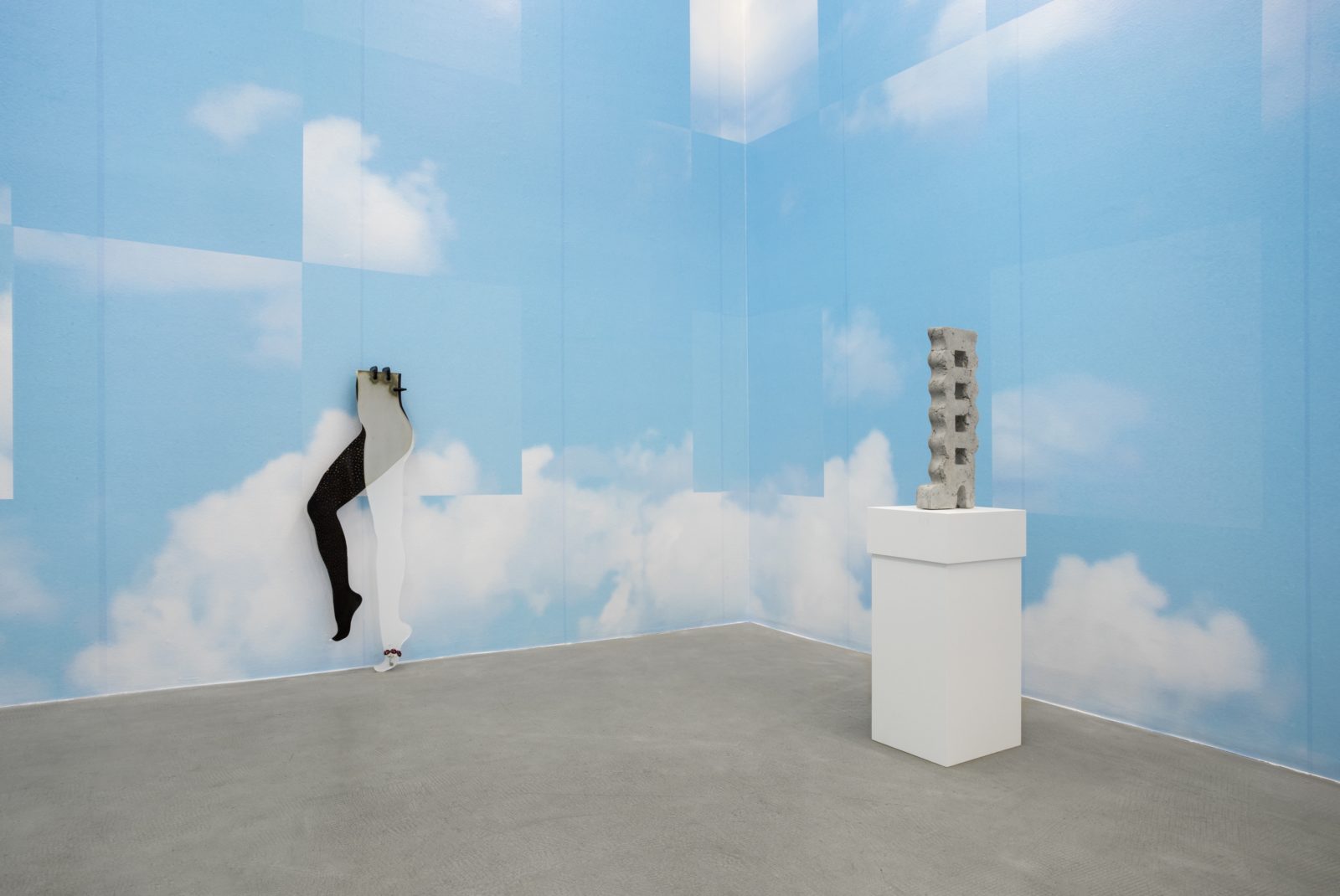 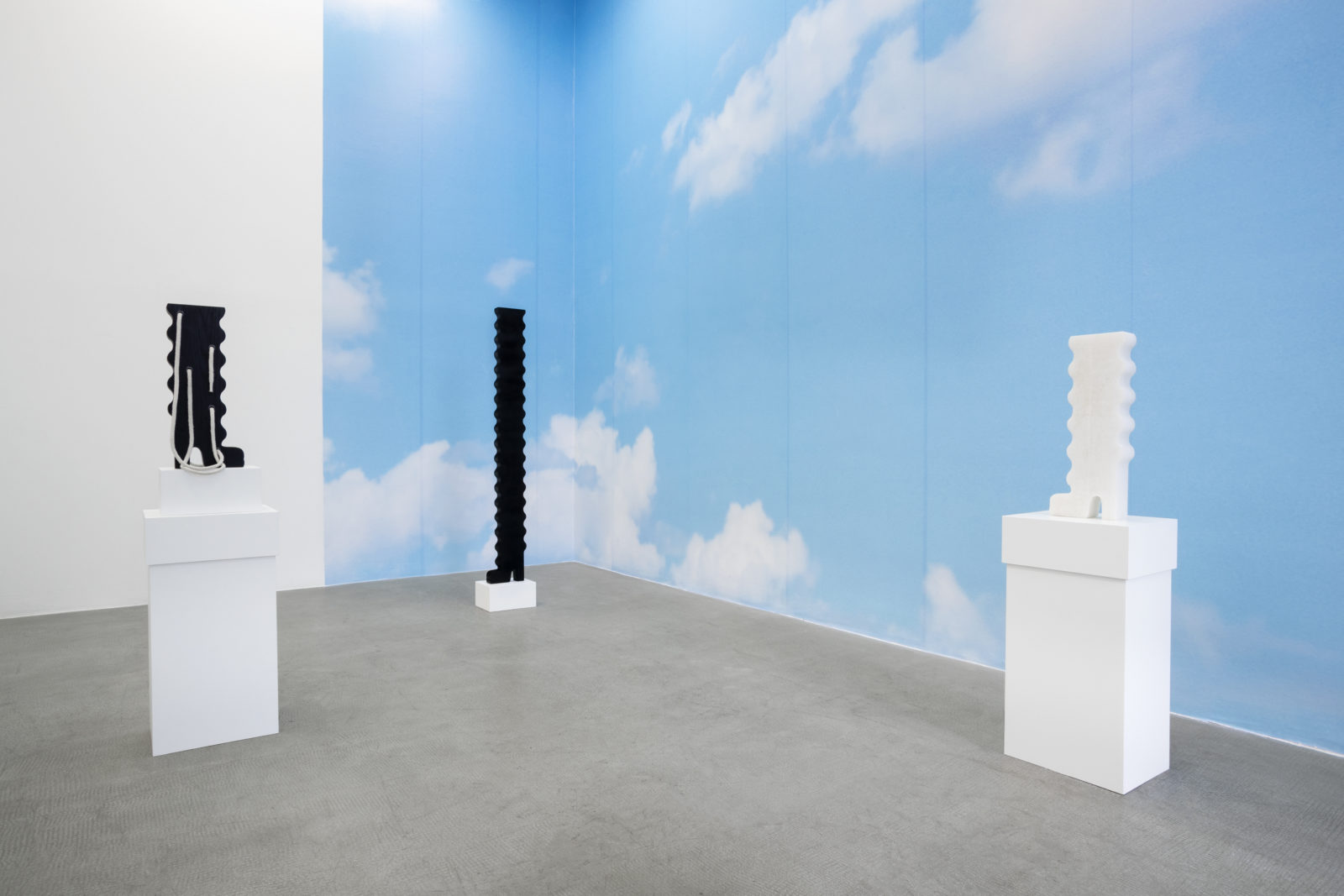 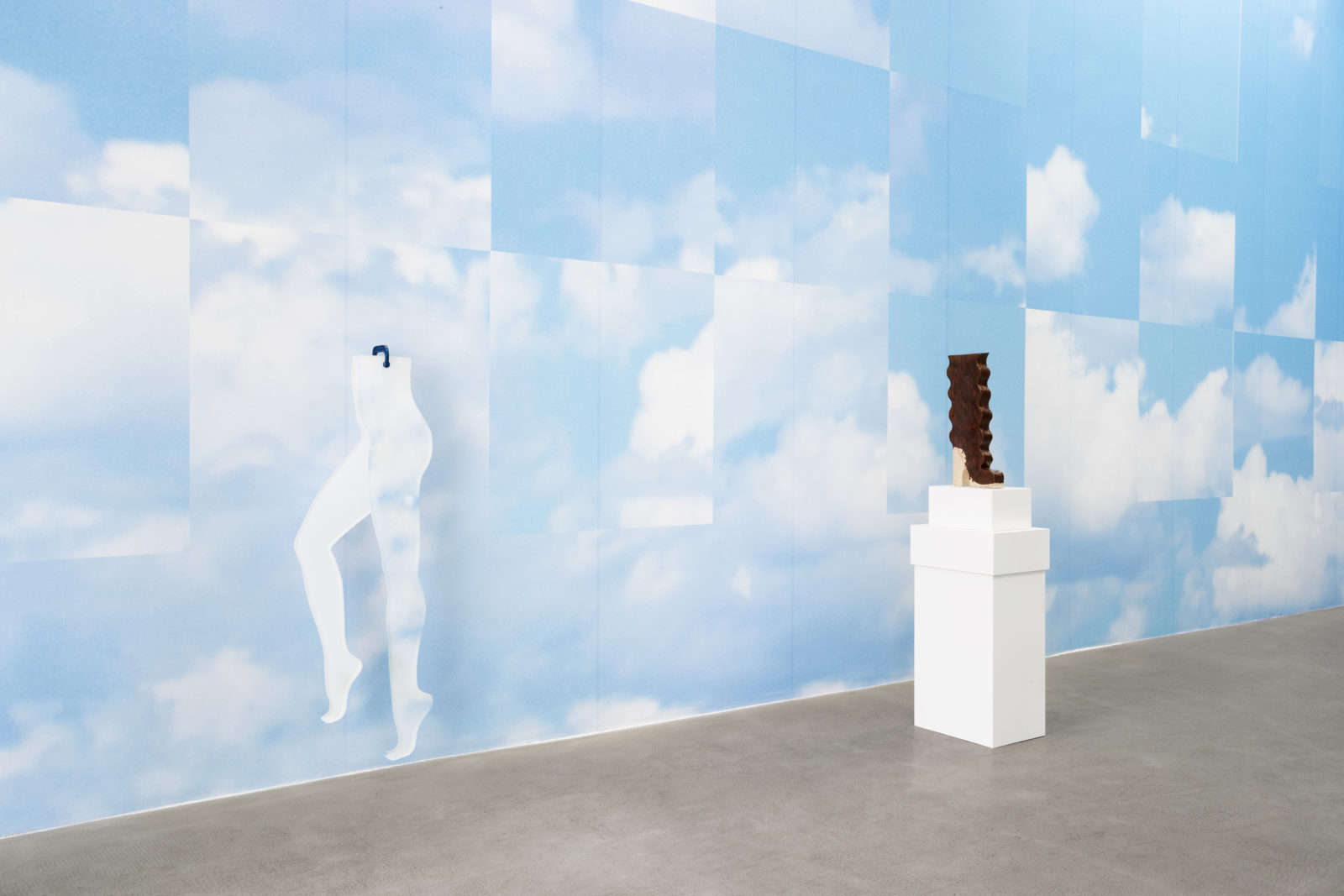 Each accessory, in turn, is dressed in additional ornaments and accoutrement, creating a recursive analyzation of its own principles and form. The body is a recurring subject matter in Hamilton’s practice, who often utilizes her own as a matrix for her works. The second space is animated by a series of three-dimensional arrangements that include acrylic cut-outs of the artist’s own legs. These tableaux, which act like 3D collages, incorporate both common and unexpected elements, chosen both for their tactile or evocative qualities. 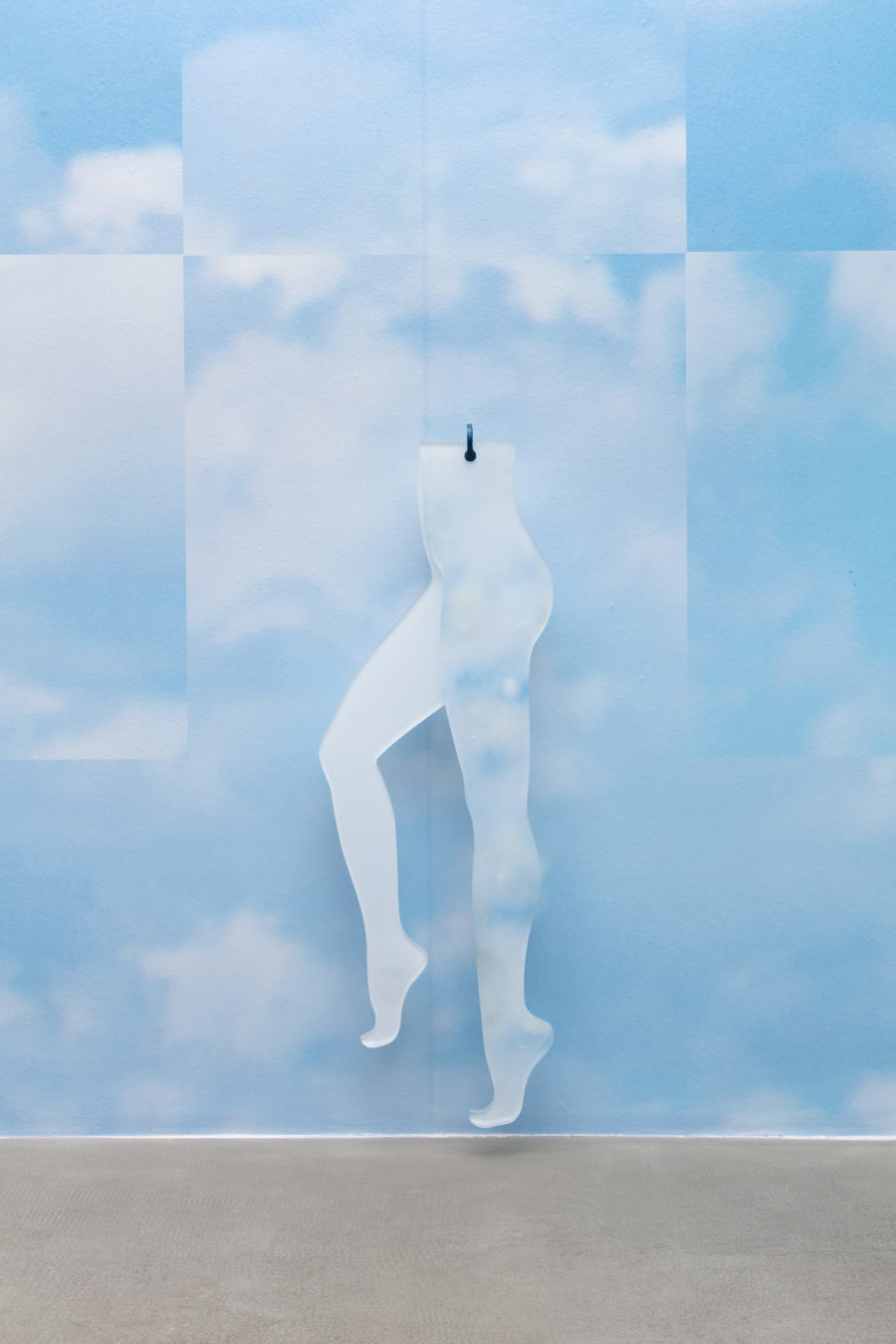 The works are positioned against a wallpaper depicting a scrambled view of the sky, more reminiscent of a desktop than of an idyllic landscape. Destabilizing the boundaries of the gallery’s physical space, it calls into question the ideological constructs of the gallery as an organization, while at the same time eliciting notions of a contrived ideal that is both virtual and almost dreamlike, suspended by an air of humor and lightness.

Anthea Hamilton (b. 1978, London) is based in London, UK. She was one of four shortlisted artists for the 2016 Turner Prize. Recent solo shows include: The Squash, Tate Britain, London; Anthea Hamilton Reimagines Kettle’s Yard, Hepworth Wake eld, UK; LICHEN! LIBIDO! CHASTITY! Sculpture Center, New York; Sorry I’m Late, Firstsite, Colchester, UK; Les Modules, Foundation Pierre Bergé–Yves Saint Laurent, Palais de Tokyo, Paris. Her work has been presented as part of the British Art Show 8 and in numerous international venues, such as at the Schinkel Pavillon, Berlin, (with Nicholas Byrne), the 13th Lyon Biennale and the 1th Gwangju Biennale. A solo exhibition of Hamilton’s work will be hold at Secession, Vienna, in September 2018.