Hazoumè’s art—which ranges across sculpture, photography, film, and sound—absorbs and confronts the complex realities of contemporary life in Benin and the broader ramifications of Pan-African politics. A bricoleur whose formal currency is often found in recycled materials—for example, the fifty-liter plastic bidon, or jerrycan, a local staple for the illegal purchase of cheap gasoline from Nigeria—Hazoumè uses strategies of repetition and recombination to create works of elegant potency whose effects are intensified by the wordplay of his titles. Masks are perhaps the best-known aspect of Hazoumè’s art. In Yoruba culture, masks have long had ceremonial and symbolic importance, as the head and the face are often regarded as the locus of a person’s destiny. Highly valued by European markets, African masks became recurring motifs in the artwork of the twentieth-century European avant-gardes. Freed from ritual or sociological purpose, Hazoumè’s masks consciously adapt the signifiers of African-European exchange to contemporary realities. Composed of plastic gasoline containers and other discarded materials, the masks are freighted with subtext, bringing to mind the Beninese men and women who, unable to find legal employment, are forced to ferry contraband gasoline between Nigerian sources and their Beninese consumers in order to survive. 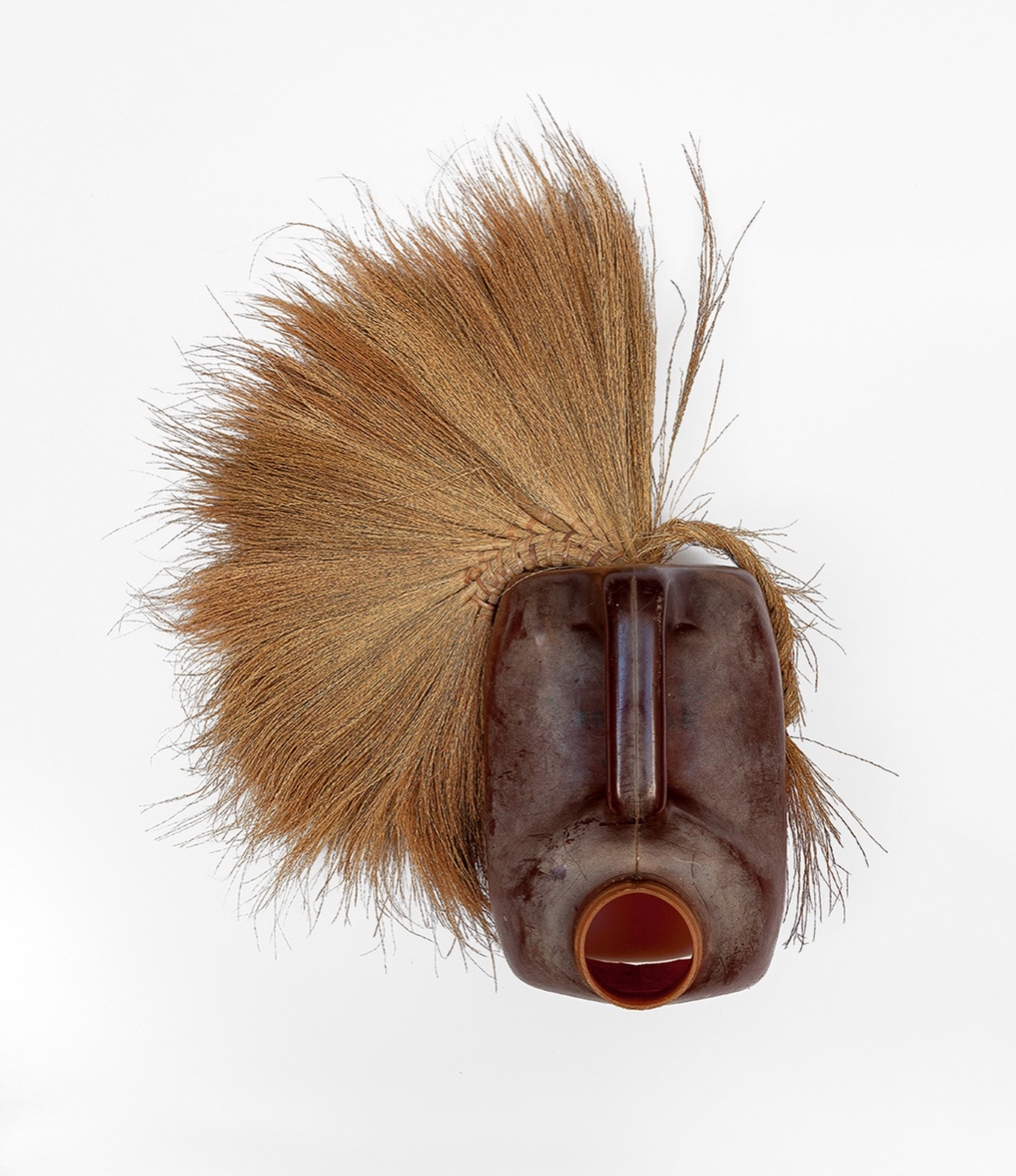 Each mask achieves a vivid quality of illusion as Hazoumè imbues inanimate objects with qualities that allude to a life story or history. Toupieman (2018), made of an orange plastic bottle and what could be a household cleaning brush, bears three hollowed-out openings, like two eyes and a mouth, that could signify laughter, speech, or a scream. Algoma (2016) is named after the Burmese who provided the artist with the horsehair broom that tops this mask, which pays homage to the Rohingya refugees chased out of Myanmar. The sculpture Alagbada (2018) takes its name from the Yoruba word meaning “the one wearing the dress” or “the dress holder.” The Alagbada spirit is a guide or pathfinder who signals the way with rapid movement of his dress; by showing only the Alagbada’s garment, Hazoumè evokes a presence, or being, in the same way that his masks do. Hazoumè’s oeuvre, with its layered symbols, draws attention to the persistent consequences of corruption and subjugation throughout Africa. Immediate and arresting, his works embody the world order as an interdependent ecosystem, underscoring its interconnectedness and its asymmetry with wit and irreverence. Without providing prescriptive interpretations of the stories that he interweaves, Hazoumè’s works challenge the viewer to grapple with the assemblages on their own terms, resisting didacticism, while their dazzling precision speaks for itself.