Having always been interested in the perception of light, elements in space and the laws and forces that govern the universe, Edoardo Dionea Cicconi stages a multidimensional ritual aimed at capturing on multiple levels the essence of a space. The site-specific audio-visual installation, a special project of the Operativa Arte Contemporanea gallery, will be hosted in the rooms of historic Villa dell’Ombrellino in Florence.Opened exceptionally for this exhibition, over the centuries the villa has played host to grand personalities including Galileo Galilei, who stayed there between 1617 and 1631, the period in which he wrote his Dialogue Concerning the Two Chief World Systems, a text which would be part of the imminent scientific revolution. 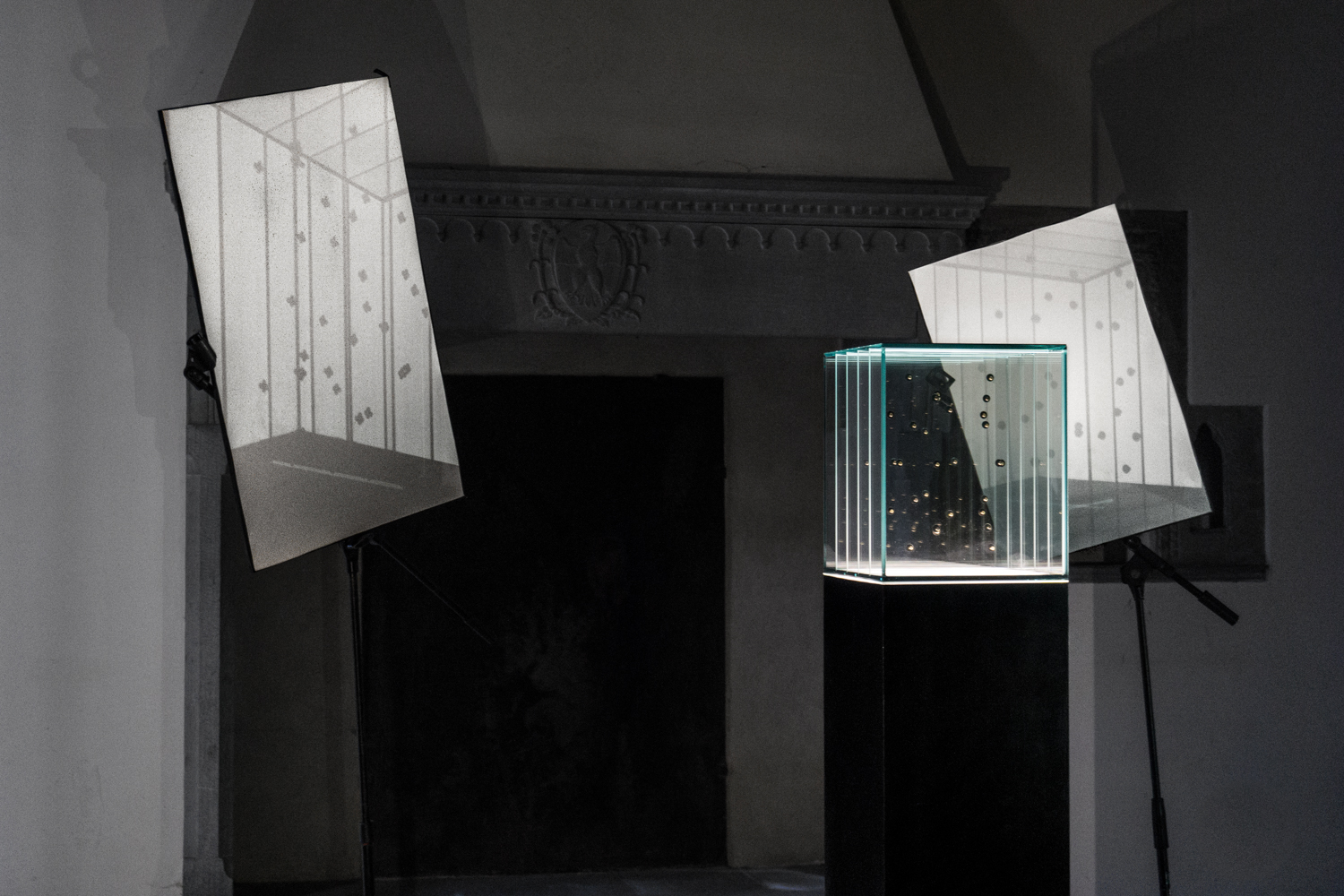 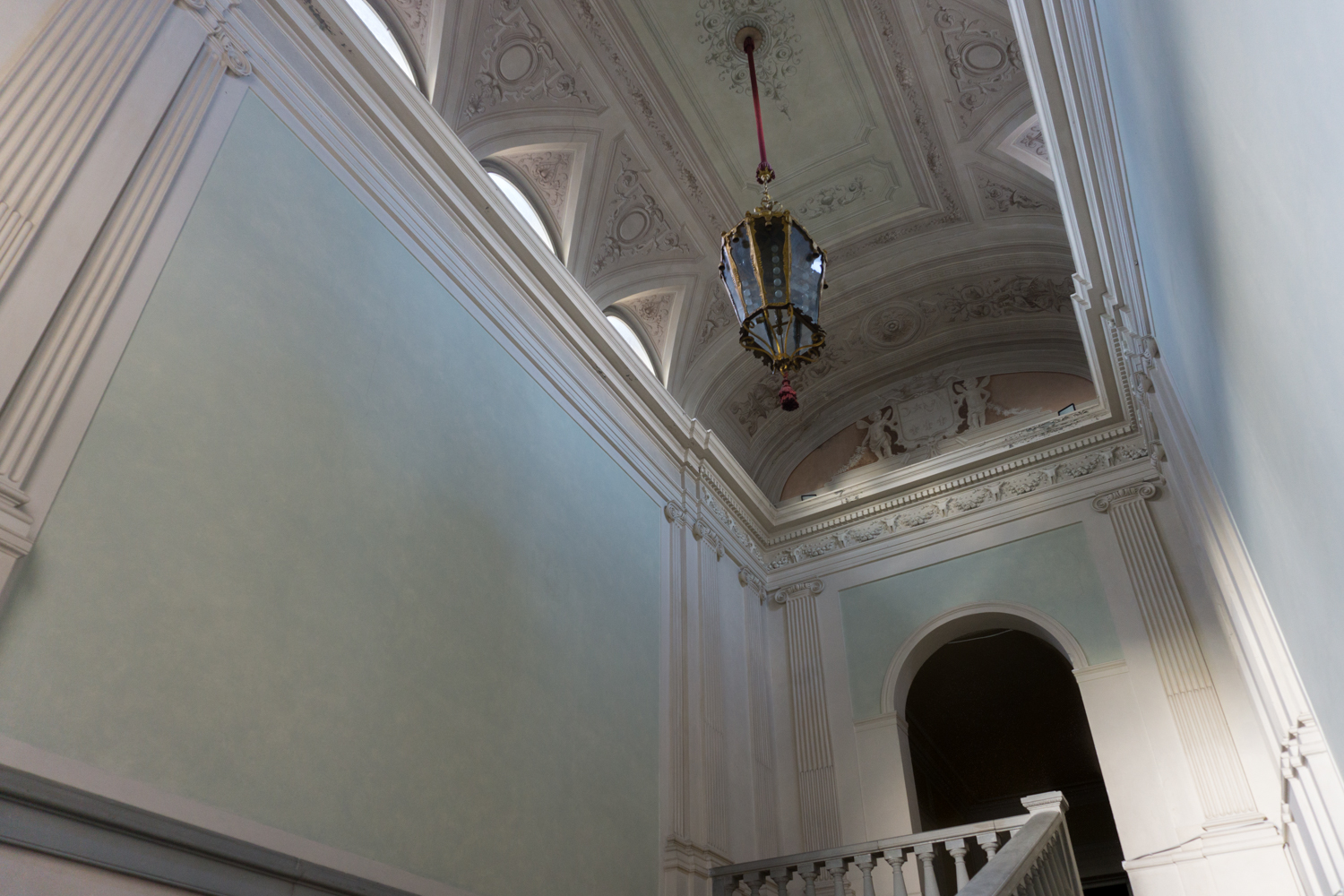 Within the space looms a primordial monolith, upon which a mysterious glass display case is placed. It is a matrix, divided into compartments of laminated glass inside which a composition of metal points evokes the order of each existing element. Infinite possibilities of representation can be created in the world using the line and the point – their primordial forms – and thus, in the microworldof Dionea, the distances between points, binding them one to another, create matter and the world itself. Here, the universe and the elements possess a harmony inflected upon a geometrical level: in imitating the surrounding space, the points perimetrically reproduce its appearance. Dionea’s installation is in fact the representation of a microcosm which has no life of its own but is the representation of a world, of a space, of the stars, of the beings that inhabit a cosmos, of the planets, of nature and of cells. Depending upon the angle from which they are viewed, the points seem to change position, but there is an order to this interior that regulates its structure: subjectively, a kinetic change of perception – which occurs totally naturally – is provided by the perspective with which the viewer who is about to experience this world views the strata of the display case, but the actual order remains unchanged.The artist uses geometry to evoke these archetypes: the object itself which encloses the various motifs, the form and the levels of the glass case, are square in shape, and the composition almost always develops in a circular manner. The Circle and the Square represent the two fundamental aspects of God: unity is equivalent to divine manifestation. The material of which the matrix itself is ​​composed – glass– gives the effect of canceling the distance between interior and exterior, between the space and its reproduction, symbolically combining the physical dimension with the ideal one. Moreover, it is the material most able to filter light, a fundamental element in this ritual and symbol of creation par excellence. 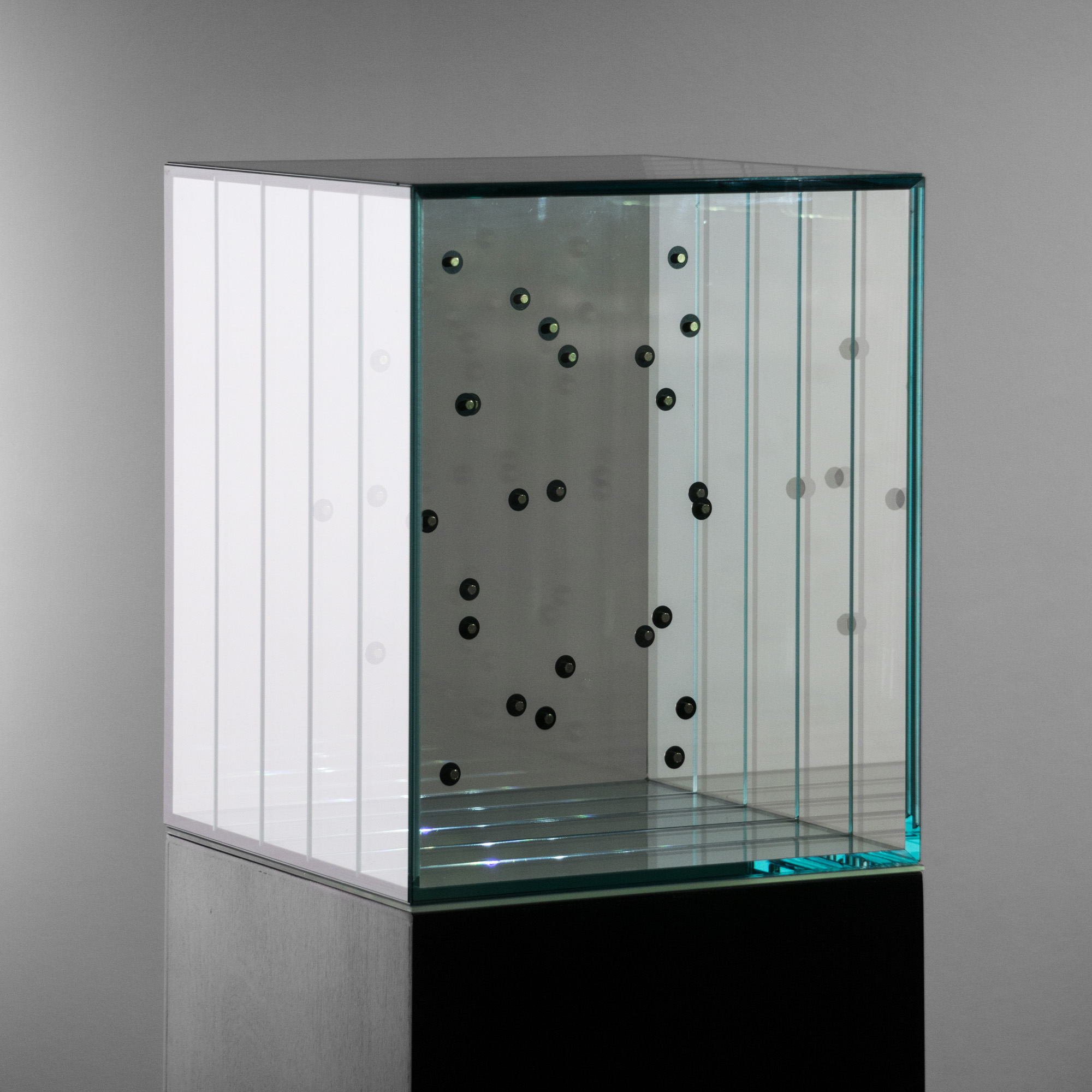 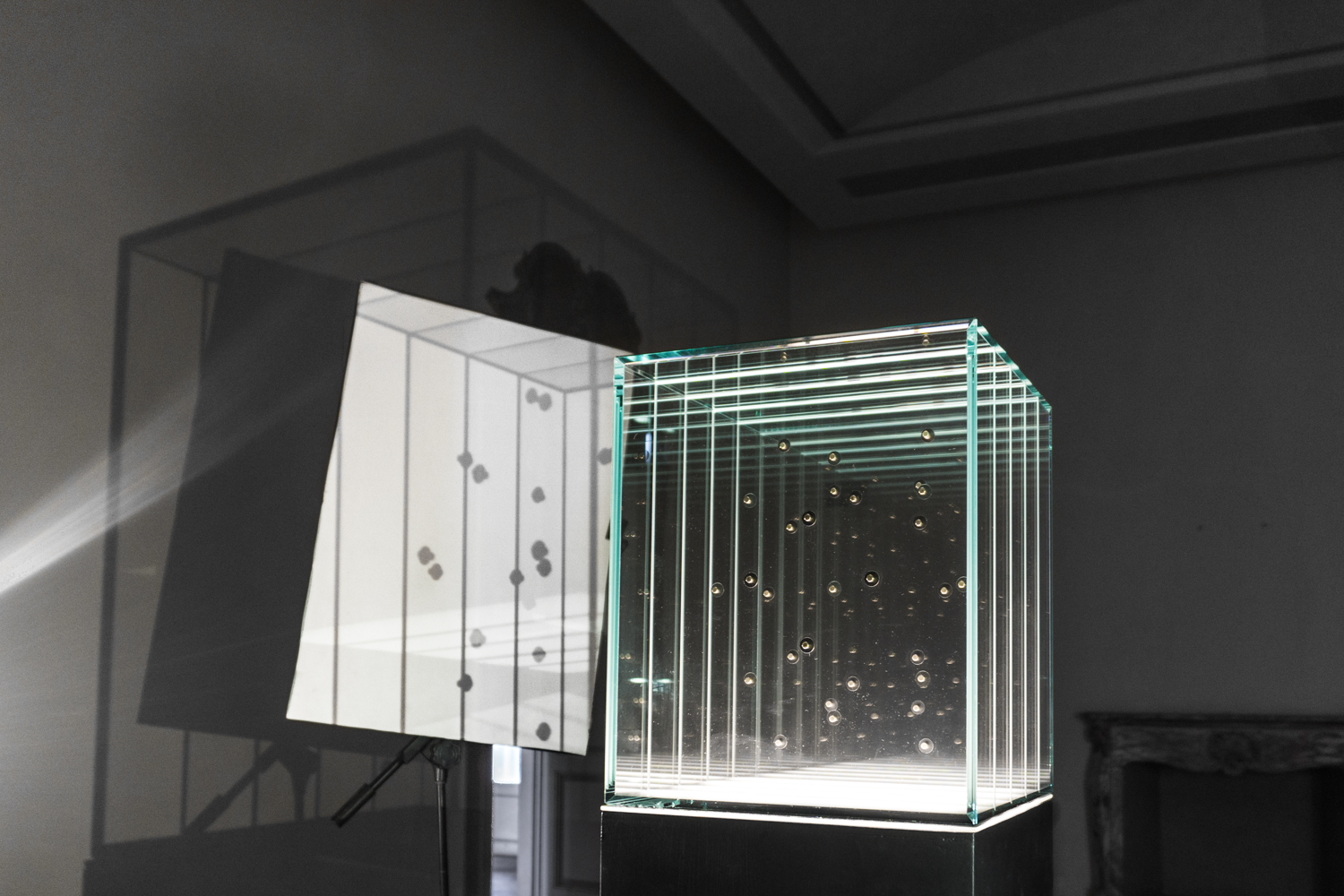 The order of things is thus represented by the matrix that, as it catalyses space, offers itself as a simulacrum and origin of the emanation of the same. Beams of light strike the case, which filters them and distributes them into the environment. The light thus strikes the three different surfaces that surround it, set between the space and the matrix. The panels are covered with a light-sensitive chemical emulsion which captures the shadow of the surrounding environment, offering an impression of the space filtered by the matrix.On these emulsified surfaces, the artist undertakes further interventions. Beginning from the essence of the immaterial space imprinted on the panel, the final work is created with an additional level that formally represents the space. In fact, through abstract photographic compositions, Dionea implements a stratification of layers on the panels, superimposing on top of the image of the space the concrete and recognizable details of the elements of the place itself (stone, water, sand, earth, etc.). 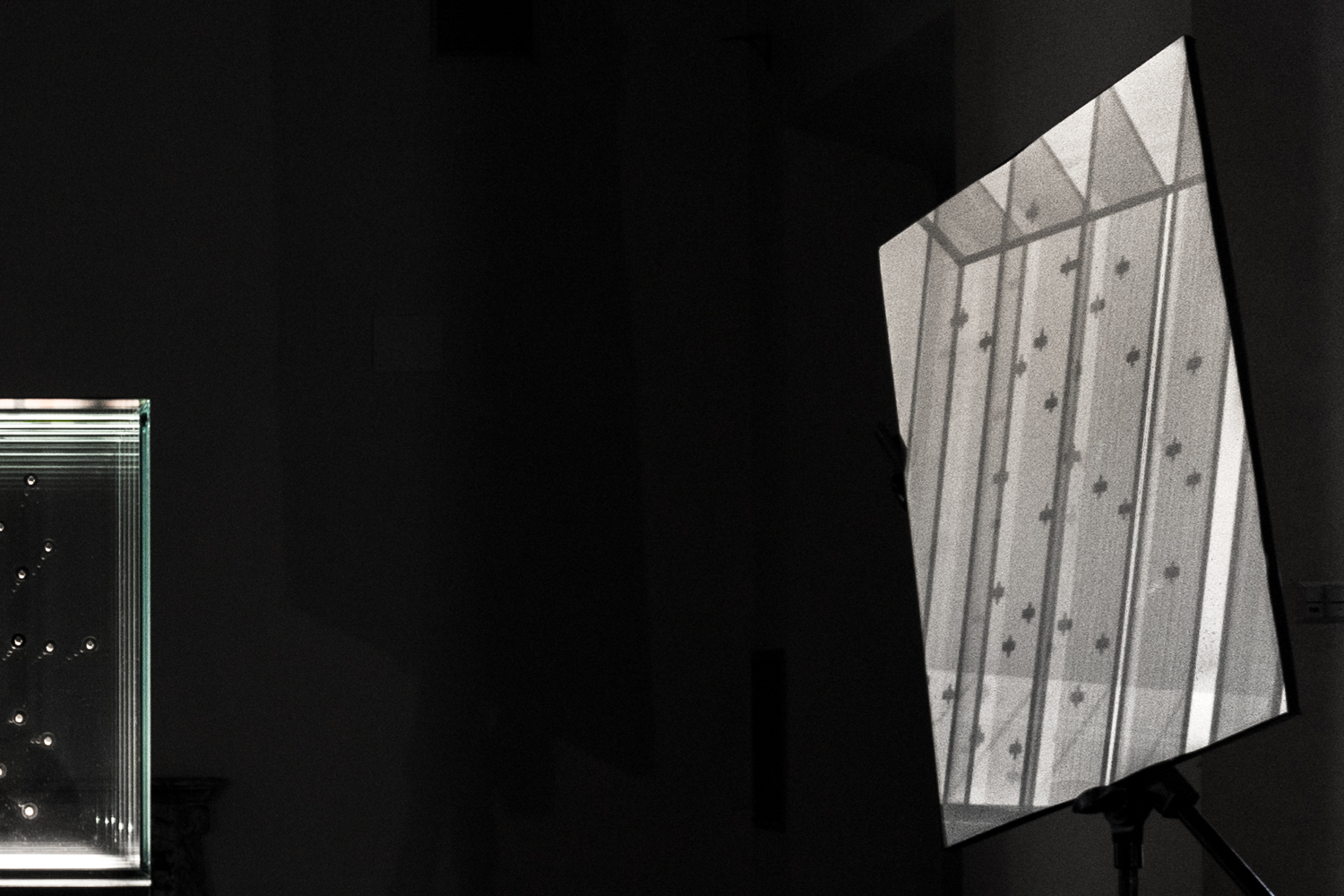 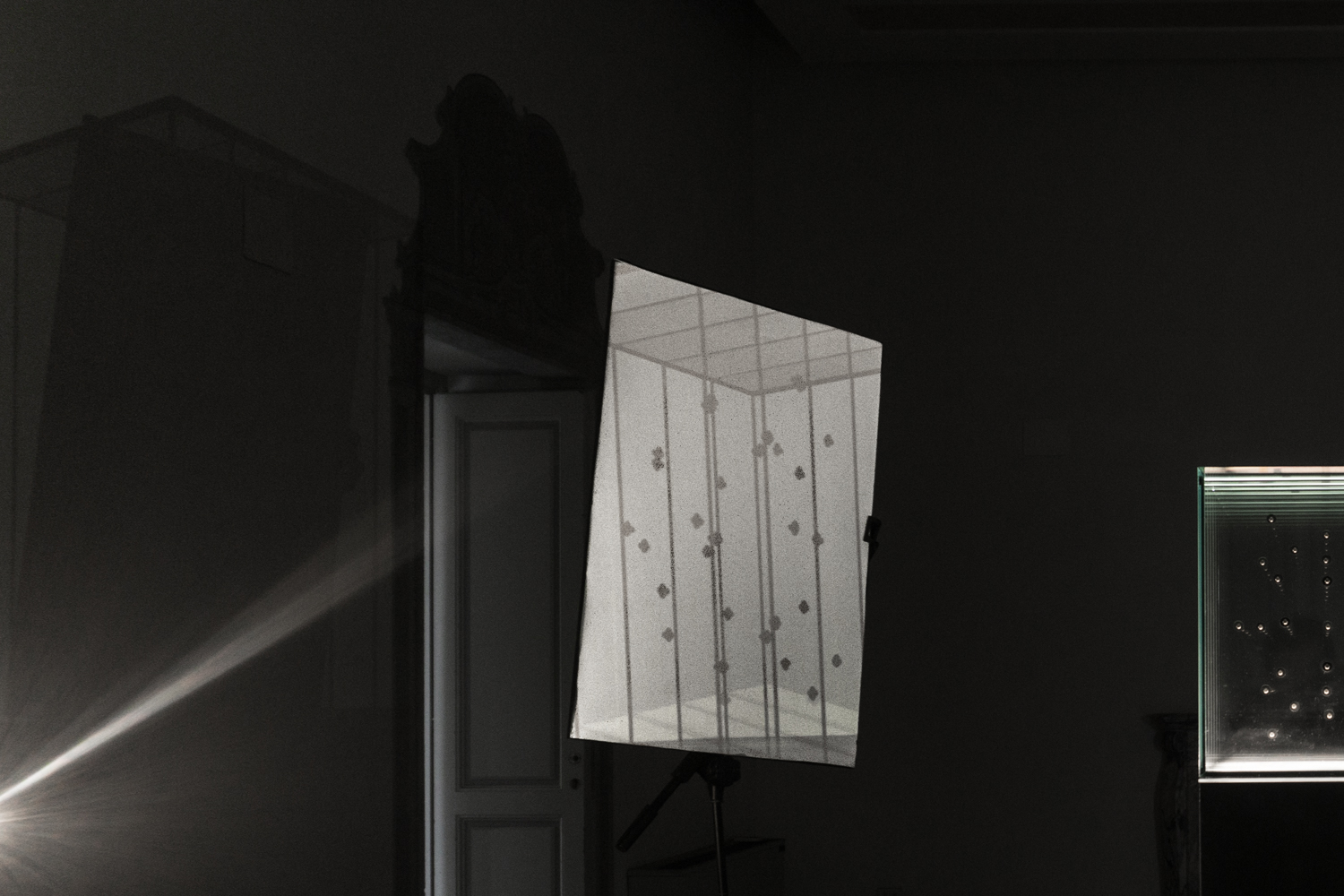 In this ritual of capturing space, an additional perceptual dimension is provided by the sound that accompanies the installation for its entire duration. The artist has specially composed a music that, developing through a series of crescendos, is generated from an elementary-primordial sound over which increasingly intertwined vibrations gradually overlap until a complex melody is created that replicates on a sonic level the physical structure of the multi-layered installation. The aural composition is driven by emotive impressions and impulses with which the artist attempts to reproduce the space and its existence within itself: the inner microcosm of the artist as an expression of the experience of a space. At the same time, theexperience, vibrating in space through sound, is absorbed and restituted by the space, with the addition, in some way, of the ‘impression’ of the same, in that each space has its own ‘resonance frequency’ – a frequency at which it spontaneously vibrates with maximum efficiency. The resonant frequency depends upon the size, shape and type of material. In each room, some frequencies will be attenuated and others emphasized, determining a unique ‘colouring’ of the sound – an acoustic response characteristic of that room. The subjective perception of the sound is greatly influenced by the room in which we find ourselves. According to this principle, the reverberation of sound in a given space is also the product of the space itself.