A conversation with Matt Mullican

A conversation with Matt Mullican

Matt Mullican in the Seventies chose to immerse himself in the search of how the human mind builds its own world, based on the subjective perception of languages ​​and the expressive ways it is able to recognize. To investigate such a deep theme in forty years he produced thousands of works of various kinds and sizes, this variety ranges from drawings to sculptures, from films to performances. By the “vivisection” of the subconscious of the homo sapiens he was induced many times into a state of hypnotic trance, with the aim of bringing out unexplored revelations, even inventing fictitious lives and analyzing themes that he couldn’t directly experience such as the female existence. Mullican’s artistic history began even before his birth, as happens in the rare lucky cases of those who are born in a family of artists. His mother, Luchita Hurtado, a Venezuelan girl who moved to North America, at the age of 20 amazed the imagination of the painter Fernand Léger; then as a feminist of the Dynaton group, she refused to live in the shadow of her third husband, an artist too (as happened instead to her Mexican friend Frida Kahlo), and established herself as the author of remarkable semi-abstract and surreal works. Today at the age of 97 she is still showing beauty, great charisma and energy, so much that in 2016 she had her own exhibition. Matt’s father, Lee Mullican, passed away in California twenty years ago. His works in ceramics and on paper tell and interpret the tribal art, which he came into contact with during his many journeys (Mexico, Venezuela, Alaska); his oil paintings instead are like a volcanic explosion of colors with endless falling sparks. 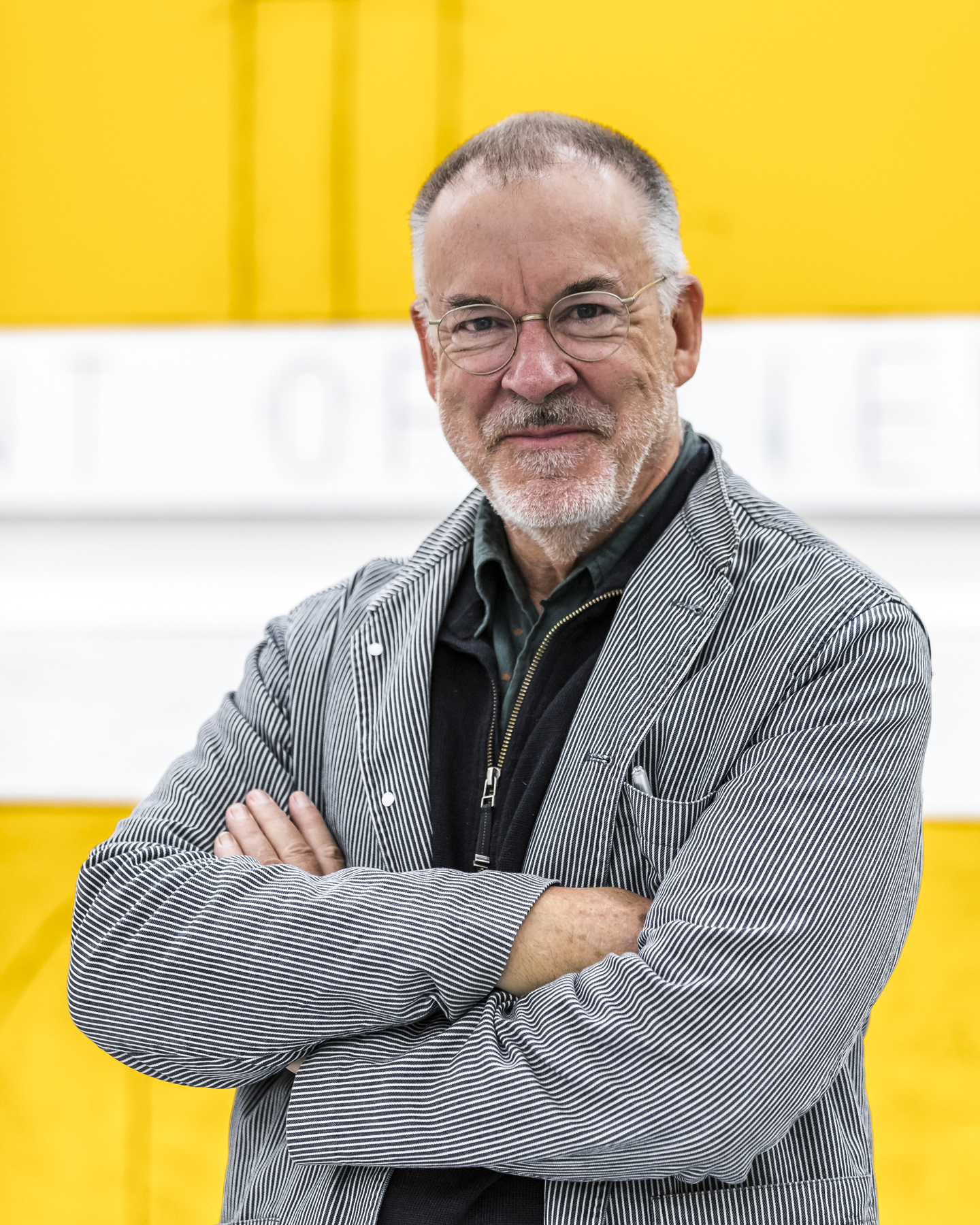 Matt, what was your childhood like in an environment full of art?

I lived in Caracas when I was 5 years old. In the summer of 1960, I was 8 years old, with my parents I lived in Rome and when I was 9 I went to Alaska. We have been to Spain, we traveled to Europe on the hunt for prehistoric sites. Then we went back to Los Angeles and I lived a few years in New York. In 1968 we moved to Chile, by then I was already a teenager of 16-17 years. Later I went to California where I graduated in the History of Art at the CalArts and then moved back to New York, where I started my own life. I mean my childhood was unbelievable: my mother was a genius, my father was a genius. I grew up in a beautiful house in Los Angeles. Our neighbor during the Fifties was Christopher Isherwood and down the road lived Sam Fransis. I had Isamu Noguchi as godfather, a famous famous guy.  He saw my first performance and he gave me great support because that generation was very open-minded. 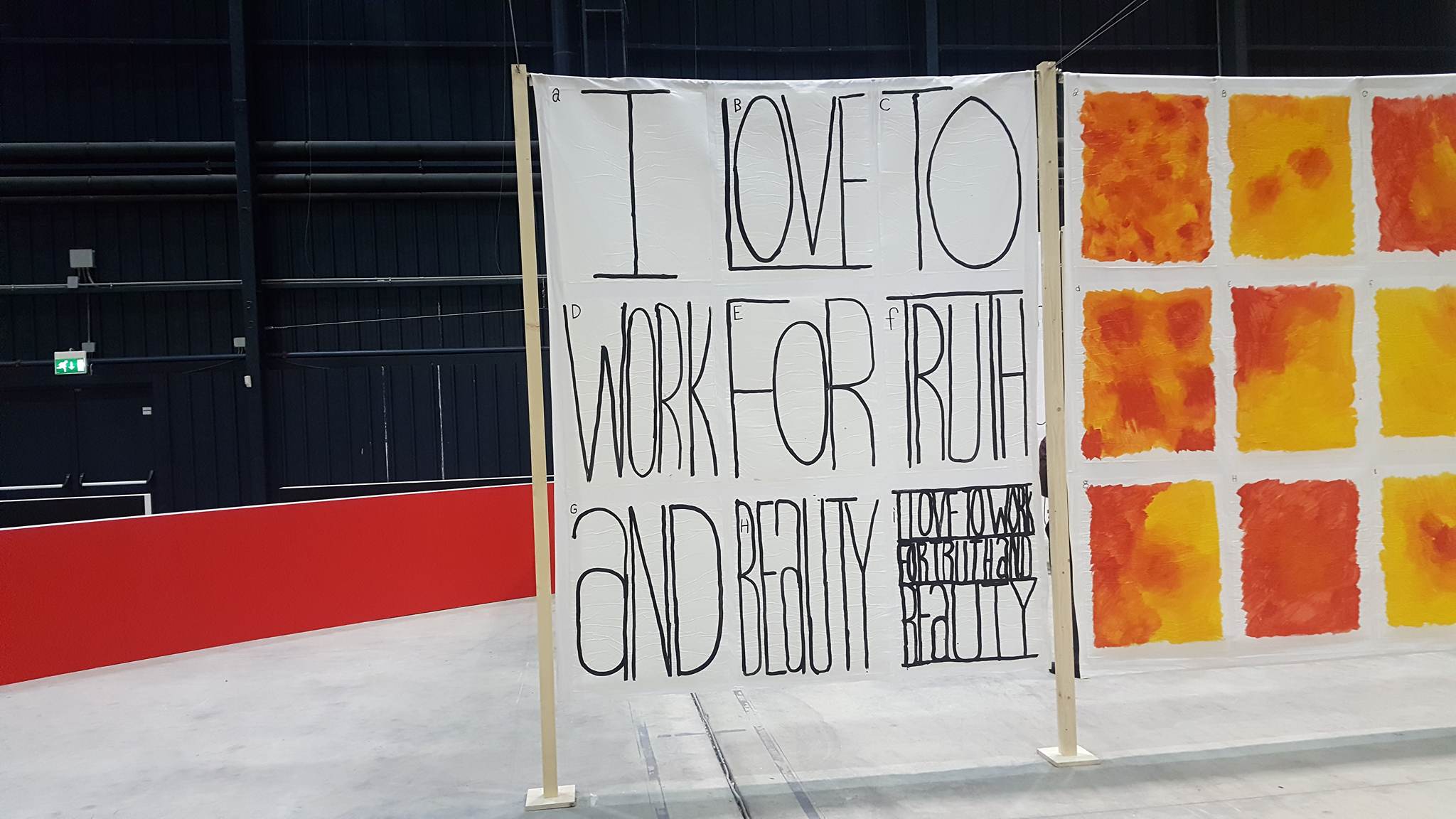 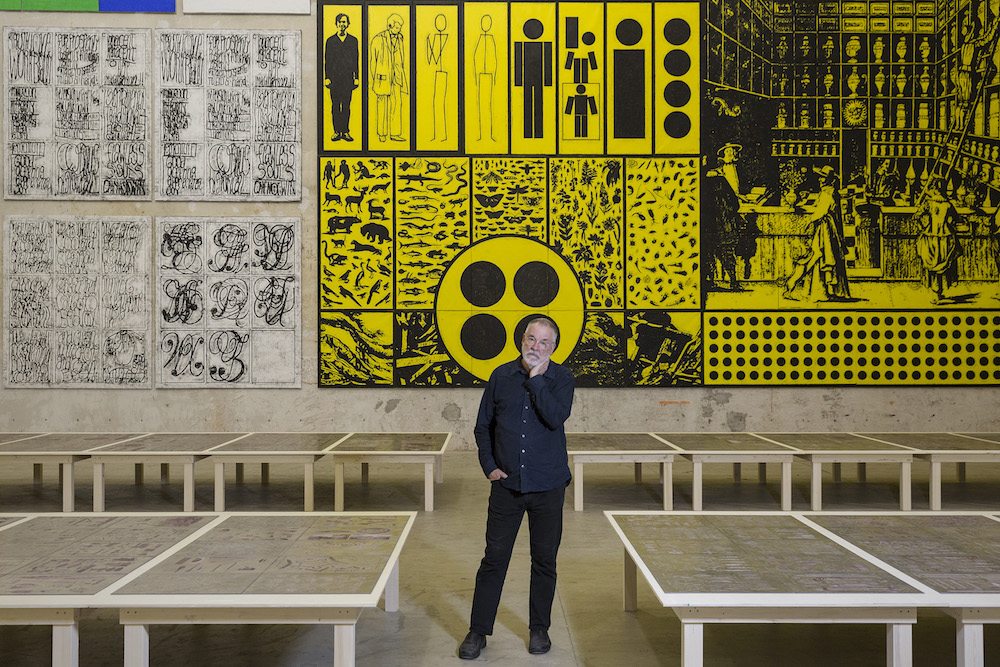 It would be impossible to speak of a specific “Mullican’s style”: his works are definitely different not only for methods of execution, but also in the choice of materials and form. We can notice a certain influence of the first television broadcasts, some Pop-art and references to the Geo-art, but also we can identify a solitary path along a life that aimed to decipher the physical and psychic dualism, a perception of the inner world through all means available in the world of art and media. He varied his artistic output from the production of  icons reducing them to a primitive graphic sign, to road signs and flags, passing through the assimilation of more complex forms with the use of colors and computerized modeling, ending with the research in the subtle intricacies of the psyche corrupted by hypnotic manipulation. This last psychic investigation is not perceived immediately but requires attention and time, revealing itself to the viewer in the presence of Mullican’s works, when the inclination to mystification becomes evident. 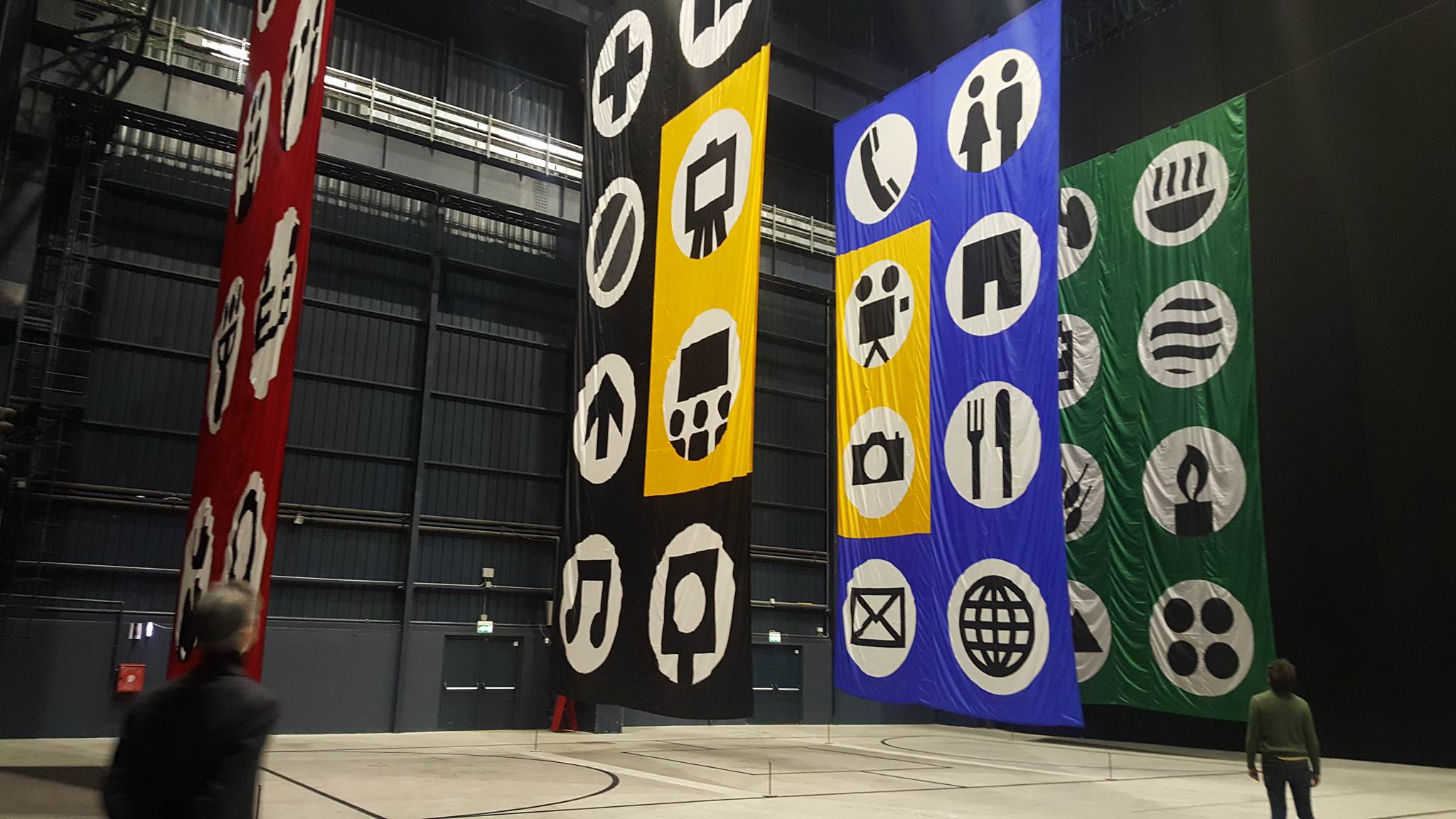 Does your interest in mysticism, hypnosis and cosmology come from your father?

Hypnosis is very different from Cosmology. Hypnosis is a scientific practice. Any mysticism in my work has to do with my mother and father. My mother is a “witch”, even if she never talks about it, but she is a medium. And I grew up with this. When I do my performances, I am not channeling through anybody: I am really channeling myself in something else. 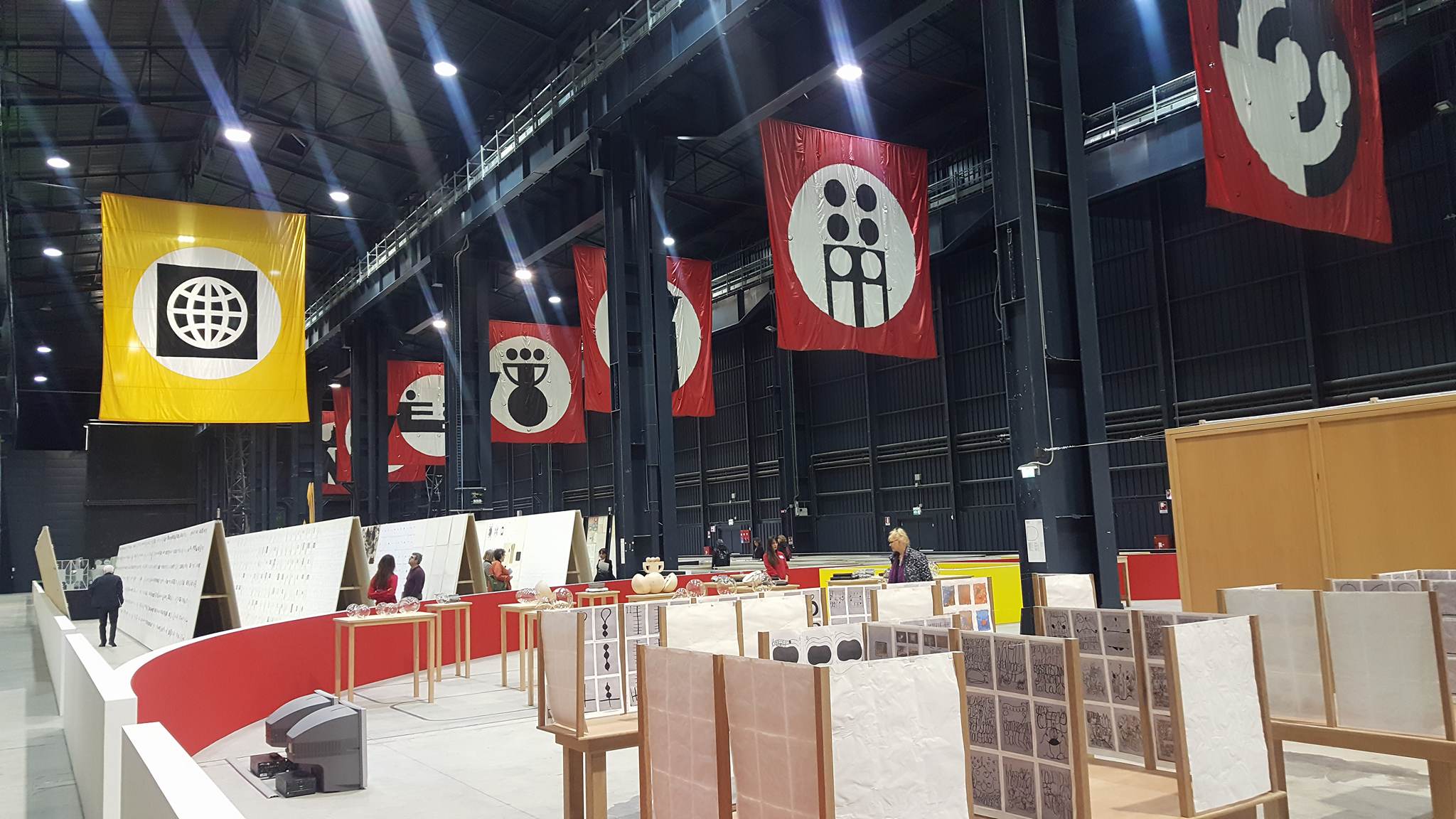 How easy is it to get out of that state and return to normal life?

It’s not easy at all. It’s something troublesome. There is a backwash in doing this because I feel it very strongly. I don’t like movies anymore because I feel pictures too much. When I’m on the plane I only watch documentaries. It’s all part of it, a part within my working body. I talked to Rosemarie Trockel and she asked me: “Where do You live?”.  And I sad “across the Atlantic”. I can be in New York or Berlin, therefore I go back and forth. And she said: “I have always thought of You that way You are the type of person that makes front flags, very architectural. I would say when you put yourself in a state of trance, you are working with Heaven and Hell with all these primitive crap. You are doing them both, you are being formal and then subjective.” There are two different worlds: there is the object and the subject and I am doing this continuously and that’s why she likes my work.

And what about cosmology?

Cosmology is another thing. I had a great art dealer in the eighties in Germany who once came up to me and said: look, I want to represent your work. But he would not represent the Cosmology because he didn’t like it at all, but he loves my language, he loves my flags. I got that and I still get that: when you start talking about Life and Death, Heaven and Hell, God and the devil, people start getting nervous, they do and so they should. But these are powerful things and people start turning their back away. I am believe in God, I believe in the existence of God, it’s the foundation for everything and I believe we are stronger, I believe we are much greater than how we are represented. I don’t think that anything represents the way the human soul is better than how art does it. And when I think the human soul is the primary element, I take that as if it means it’s the primary element in the arts; it’s all about the soul, not the body. Whatever I am doing I am always trying to get to the source and to understand. I always try to understand: what is it? … what is it?