Mast Foundation for Photography Grant on Industry and Work 2018

Mast Foundation for Photography Grant on Industry and Work 2018 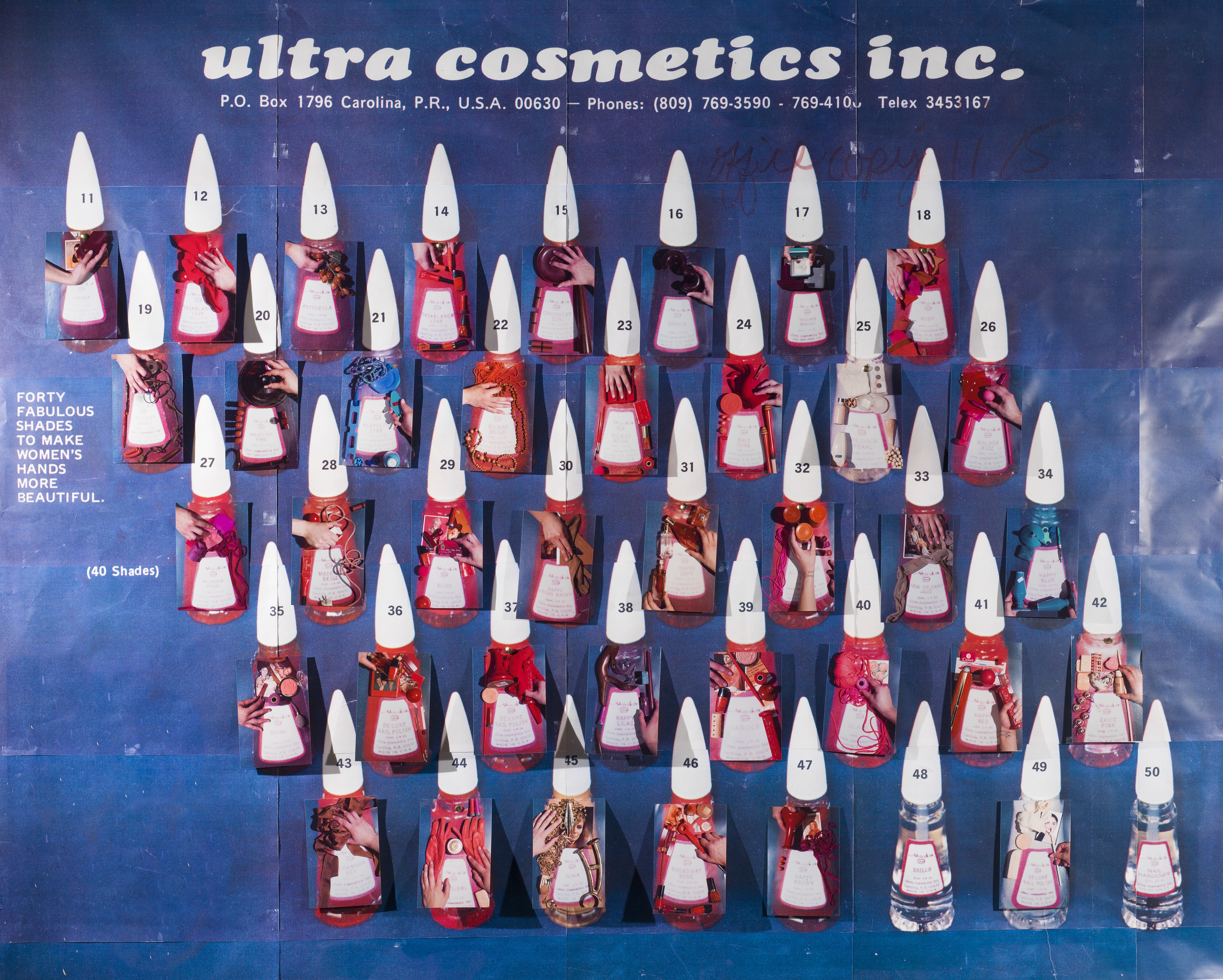 It’s important to mention how nowadays there’s a discrepancy between the knowledge of the finished product – which is familiar to us to the point of becoming and extension of our body and inducing us to build an image of ourselves through the act of the purchase (a phenomenon which is particularly amplified in the era of social media) – and an almost total lack of involvement and ability to understand the world of industrial production, even though it is the very images of the production process which enables us to understand the evolution of the labour market and how it impacts society and consequently the consumer of the product which looked so familiar. Media, technology and finance have almost implemented a process of abstraction of the world to the point that areas of fundamental importance which govern the transformation – always ongoing – of our daily life, ended up being distant, inaccessible, unintelligible and obscure for most people. Therefore it seems like there’s an impelling need to reduce , or better, to cancel this distance allowing us to visualize the process of production through a perspective which goes beyond what is portrayed for the insiders. The photography can be the vehicle documenting reality and the photographic shots can be the eyes through which one can follow the developments in the world of the industrial production, which involves machines, goods, digitalization etc. Urs Stahel – curator of the photo gallery of the MAST Foundation – raises the question related to the observation of reality by looking at a representation, one of the fundamental problems of photography. Bertolt Brecht in 1931 stressed that in that sense  the reproduction of reality in fact is not able to tell us anything about the objective reality – the mere photographic reproduction of a factory, for example, won’t tell us anything about its history and function – in this regard it’s necessary to produce something even more “artificial” and researched, a system made of interconnections which is able to relate to different elements of reality since the simple observation of it lacks the necessary information to understand it. It is essential to include in the image a connection between the abstract knowledge and the essence of human behavior, a connection between information and emotions. This is should be the target of young photographers and this is what MAST with the award of MAST Foundation for Photography Grant on Industry and Work (won by Sohei Nishino and Sarah Cwynar) – wants to promote and support, encouraging the investigation of themes considered essential in order to understand the reality of our time. 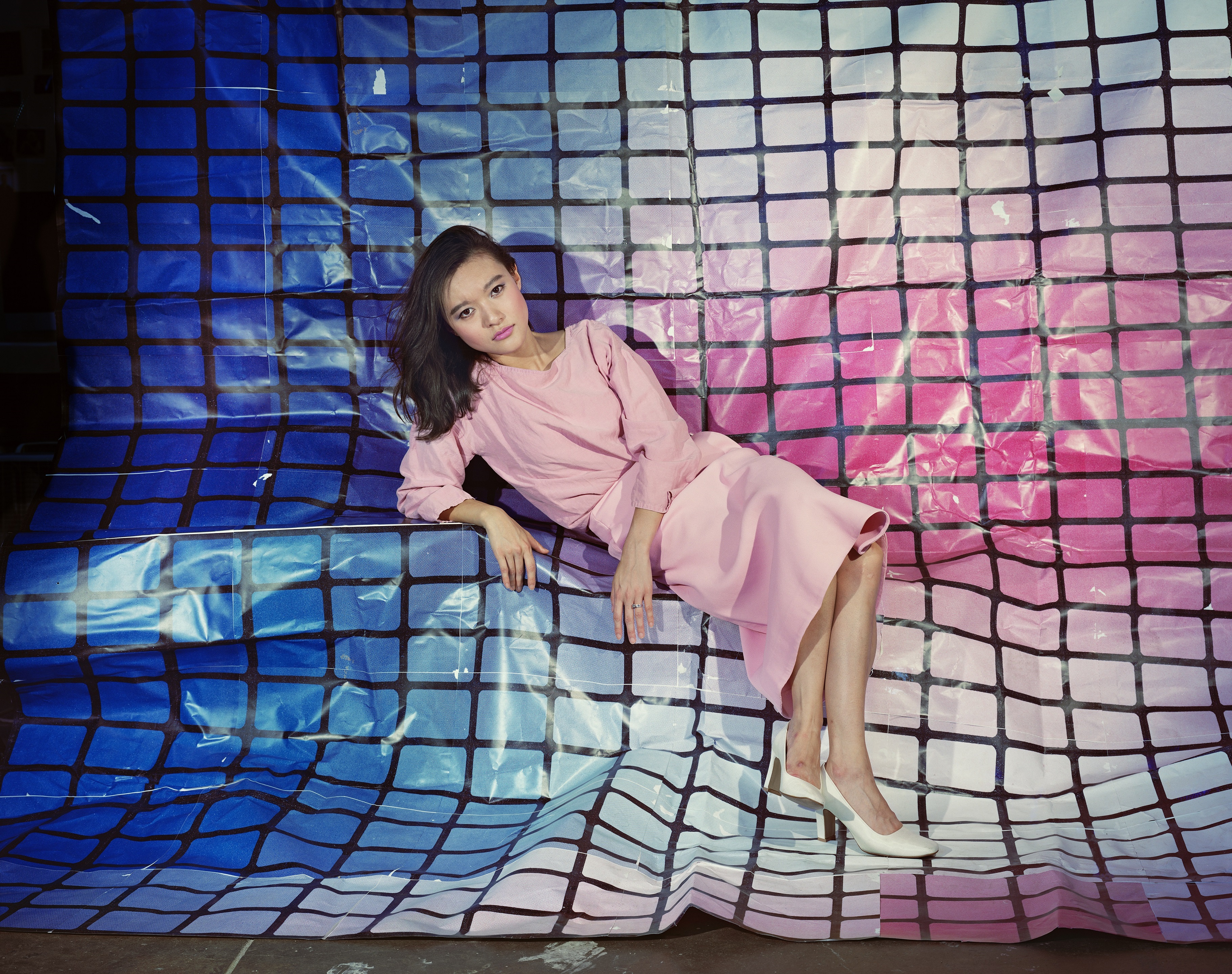 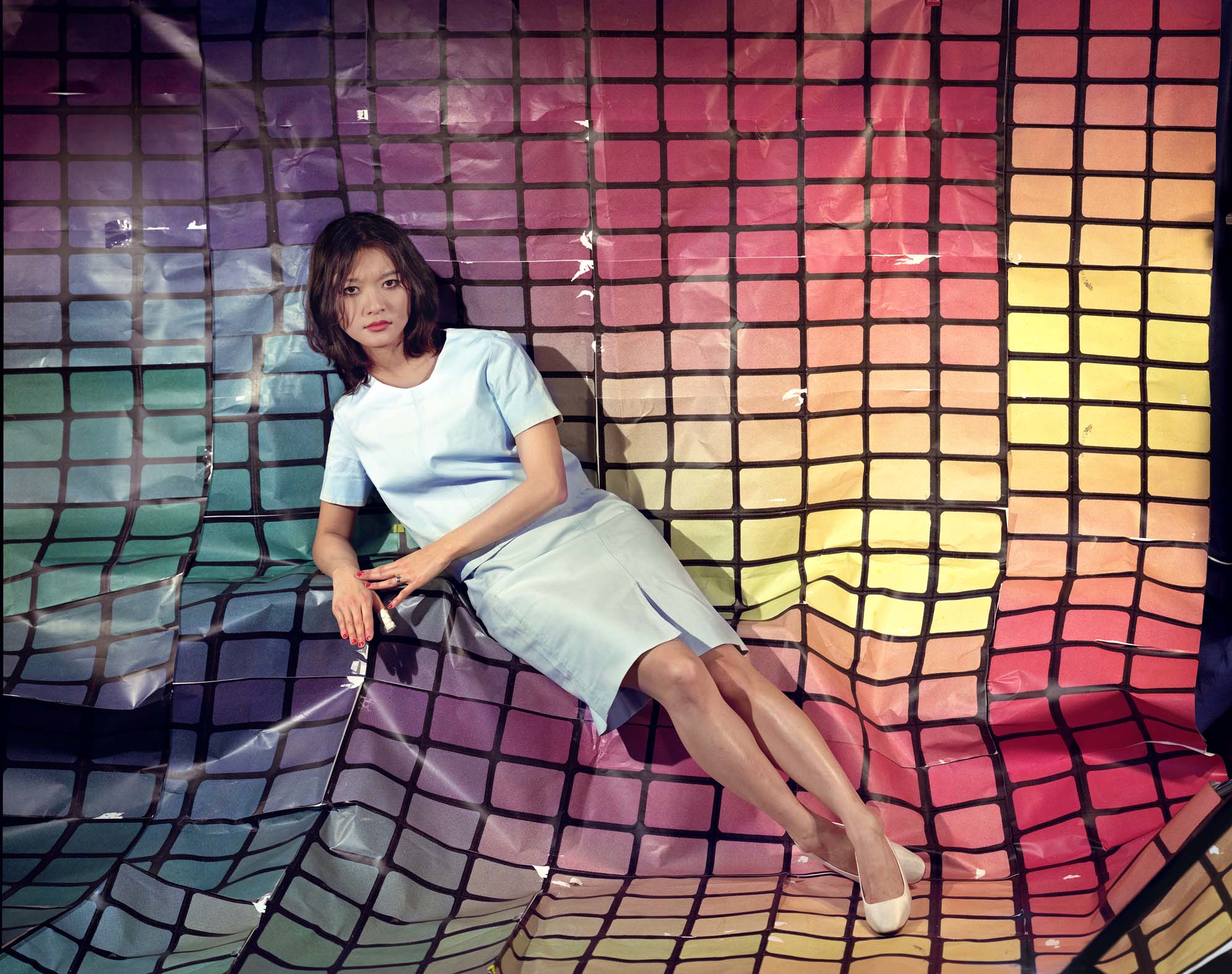 Sarah Cwynar focuses her works on shades of colors, analyzing color standards through the industrial tintometric systems in relation to beauty, to the models imposed by capitalism and their relationship with feminism, color theory and the features which make color an important part of experiencing human life. Cwynar’s work includes a short film, Colour Factory, and photographic shots through which she analyzes the paths we subconsciously follow and how our behavior is influenced as consumers of both images and commercial products. In the series of shots taken with her muse “Tracy”, she seems to explore the research made by the manufacturers of photographic films and their evaluation standards, looking for the right skin tone and the colors which seems to highlight it. The relationship between color and our personal perception of them is the focal point of Cwynar’s investigation, her short film is like a stream of consciousness, a collection of sensations, personal feelings and universal emotions. She presents iconic images such as wonder woman’s boots, red lipstick and red nail varnish.These are analyzed in relation to our personal perception and memory of the colors. At the end of the film a symbolic sentence states “I will never know how you see Red, and you will never know how I see it”. Our ideal of beauty though could be standardized and mass produced through a red lipstick, for example, and this is due to a collective memory linked to a tradition of images of red lipsticks, from movies to fashion, in the experience of what Lauren Berlant defined as a sort of “public intimacy” , a personal/sentimental network of cultural requirements which convey the goods and the experiences in the world of consumerism and assume the existence of a “common story” where the objects are expression of the story and correspond by convention to the feeling of belonging to it.

The subject chosen by Sohei Nishino for his project is water. While wandering from place to place, creating his majestic panoramic works composed by using thousands of shots combined – halfway between a map and a diorama – he claims to have found in the element of water the driving force of the world, something inextricably connected to the human existence. Nishino “flies”over the longest river in Italy, the Po, which being 650 km long, runs through 4 regions of northern Italy, providing water to those lands which helped the industrial fabric of the country to thrive. Sohei’s artistic research is not limited to the mere transposition of geography in the form of collage, it’s much more than that. He started his journey on the mount Monviso, at the border between France and Italy, and travelled for 45 days, from Turin he followed the river towards the Adriatic sea. During his itinerary he was able to experience the cultural and political environment of these places, meeting the locals who live in the area, fishermen, children, woodsmen, mixing with them and creating a portrait of the human presence near the bed of the river in an image which is able to picture the land, time and memories. A combination of 30 thousand photographs reproduces the essence of the river, a result Nishino was able to achieve after a meticulous and very long process.  He works alone, develops the films in a darkroom, hundreds and hundreds of rolls which he then places onto contact sheets and subsequently cuts to shape, one by one. It’s an infinite and repetitive action which makes him recall his personal experience through the memory of the places he visited, their history, society, buildings,  and the people he met who resurface united in their own uniqueness in the general view of the whole picture. 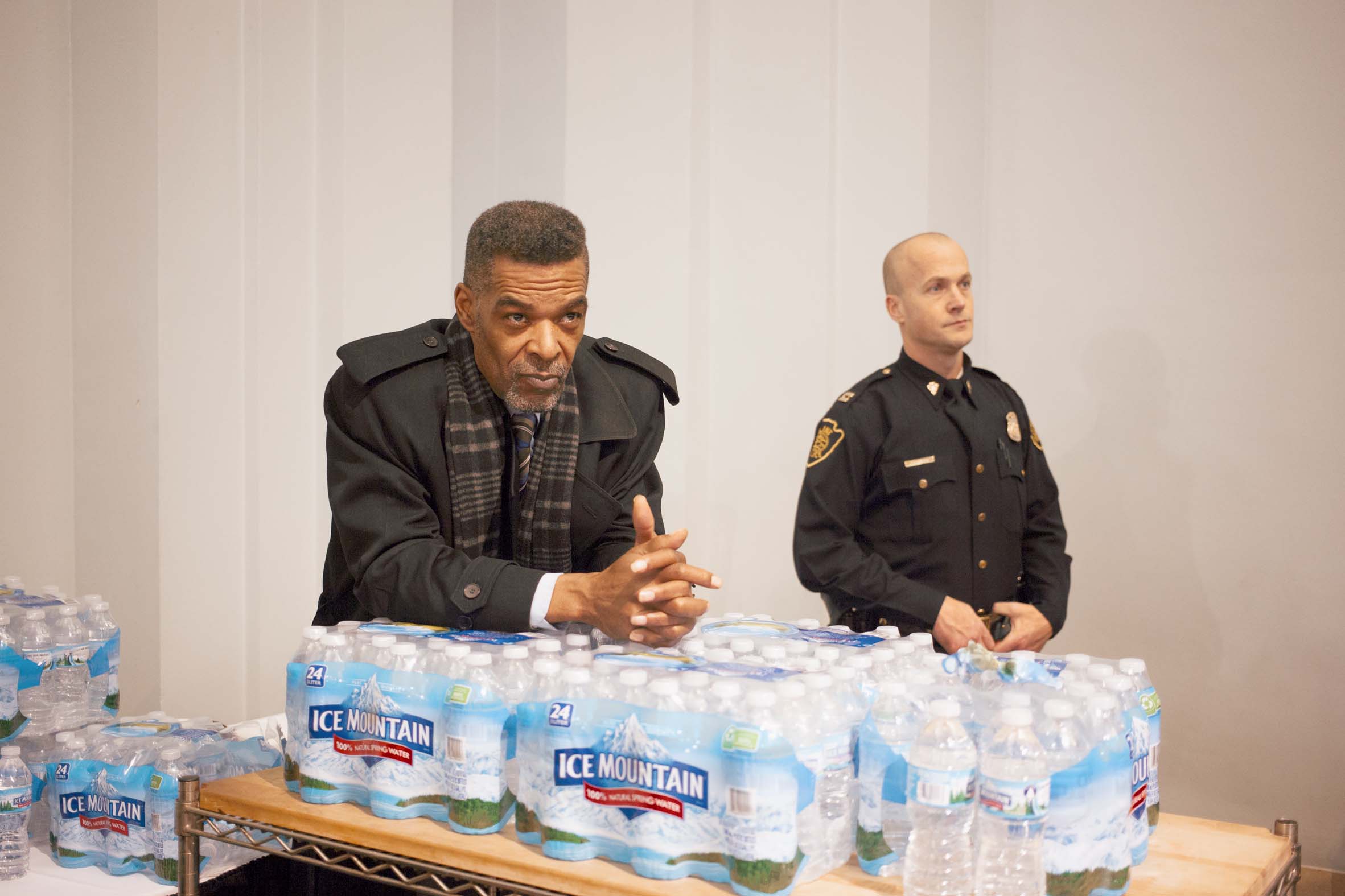 In Mari Bastashevski’s “Emergency Managers”, water is also used to convey a message, but the young Russian photographer in her work wants to investigate the mechanisms which are at governmental level and the negative impact that the bureaucratic machine can have on part of the society. In her project she addresses the issue of the water crisis which struck the city of Flint (Michigan) in 2014. When the town decided to build its own water source, ending the supply contract with the city of Detroit, the construction of the water supply network was so badly made that as a result residents were exposed to high levels of lead in the drinking water and many suffered lead poisoning, especially among the African American population, therefore forcing people to drink only bottled water. In her investigation Bastashevski tries to find out the causes of the crisis and how it was dealt with by the people in charge, focusing her attention onto the people who profited from the crisis, protecting the victims from exposure, refusing to sensationalize their pain as too often happens in these situations. The artist’s focus isn’t on how the incident ended nor is exclusively on those involved but she tries to examine new perspectives and to understand the inter-relation between private and public interests. Bastashevski’s work is of particular interest because it goes beyond the simple representation, becoming “representative”, on one side neutralizing the portrait of the crisis usually made by the media, on the other end emphasizing the documentation of the events and highlighting their informational value. Bastashevski presents a visual composition of images and documents linking them in order to bring to light critical knowledge useful to the civil society, refusing to use the visual element as a weapon of persuasion and as a simplified representation which is what happens in situations that receive extreme media attention. 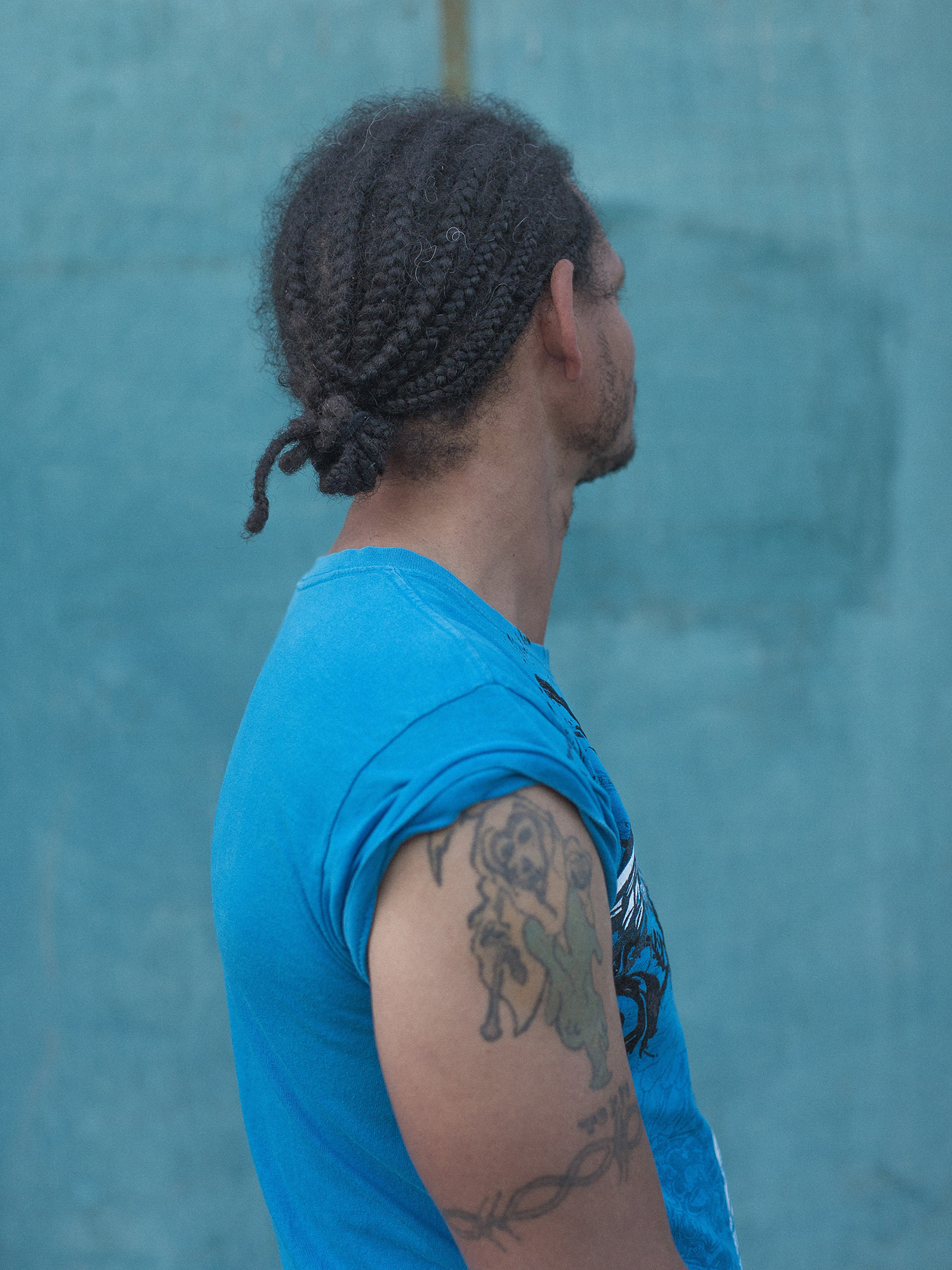 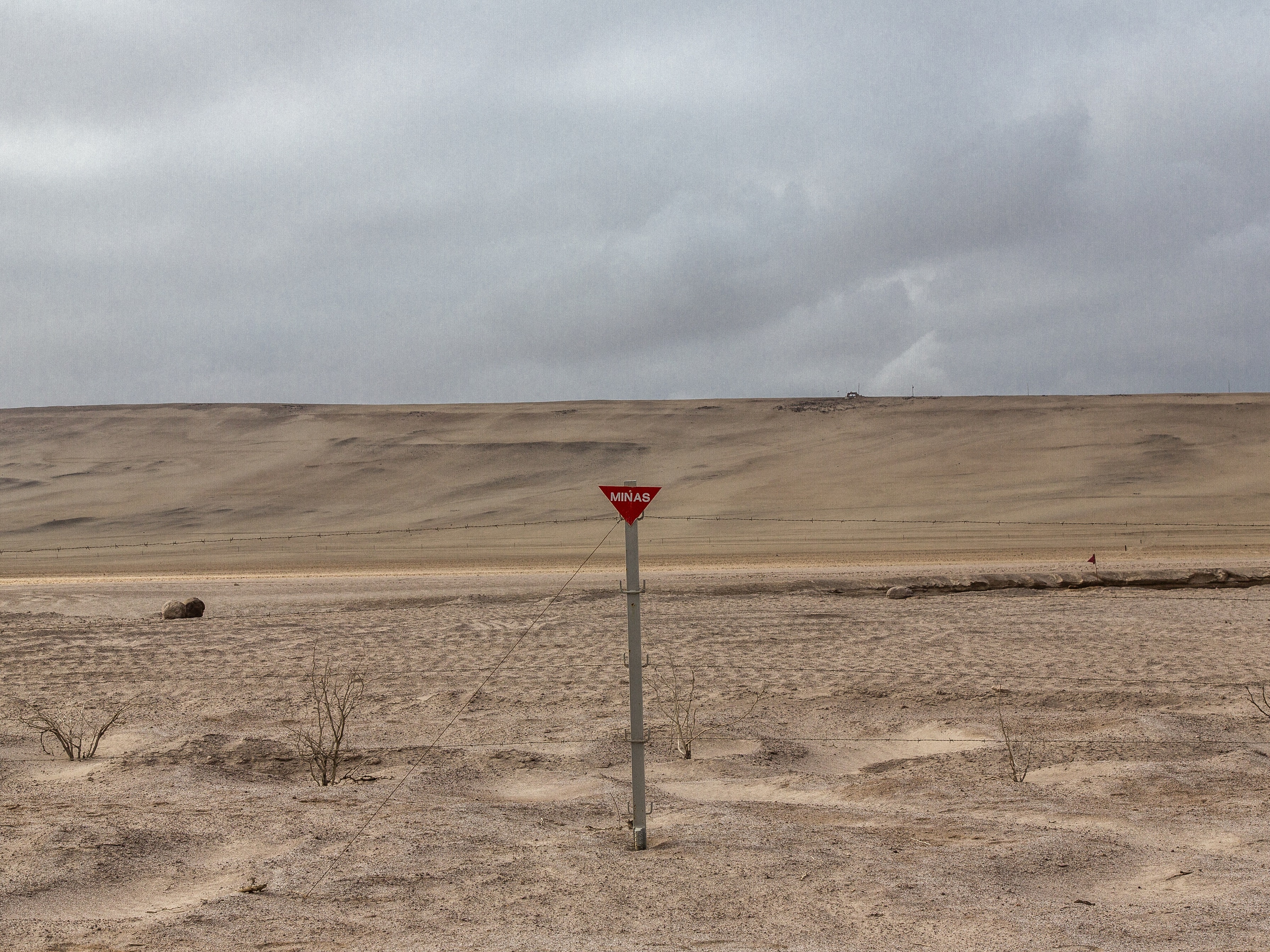 Cristobal Olivares Untitled, from the series “The Desert,” 2017

“Dominicans are required to have special visas to enter as tourists, which has made them an easy target for smugglers. They are deceived, robbed and abused [..]. Most are intercepted in their own countries where they receive travel offers [..] through the desert on the borders between Perú, Bolivia and Chile where the biggest threats are minefields, heights of more than 3,800 meters above sea level and extreme temperatures during the day and night”. These are the words used by Cristobal Olivares, a young photographer from Valparaiso, to describe the migratory phenomena from the Dominican Republic to Chile and what takes place around the problem of the many people who try to cross the border illegally.  It’s not a metaphor to say Chile is at one of the limits of the world, it’s a difficult place to reach, even in our modern times. It’s a country that it is built in the same way as an island with the Andes mountains on one side and the Pacific Ocean on the other. Its geographical condition puts it almost in between two personalities, the insular one which is reserved and closed in its identity, and the openness to migrants which have crossed it with their cultures and their own identities. After the military dictatorship, Chile opened itself and started promoting its territory becoming a main destination for Latin American migrants. Therefore between interest and negation, new identity challenges arose, though common, they were new to this country, about what is the distance perceived and in what way are the others different. Cristobal Olivares in his project “The Desert” puts himself next to the migrants and their stories and explores the implication of the identity question. Olivares presents shots of enlarged landscapes of the desert, empty, which become background for the portraits of the migrants and for the video installations where they regain their speech. In a process which seems to suggest a loss of identity, the migrants are pictured without showing their faces, but this expedient, even though it exposes their weaknesses and uncertainties, also highlights the fact that they are part of mankind. Olivares reflects upon the distance between oneself and another, fluctuating between reality and fiction, distant from the concept of documentary as a testimony of reality in a possible passage from the story of the individual to a universal feeling between memories and appearances.