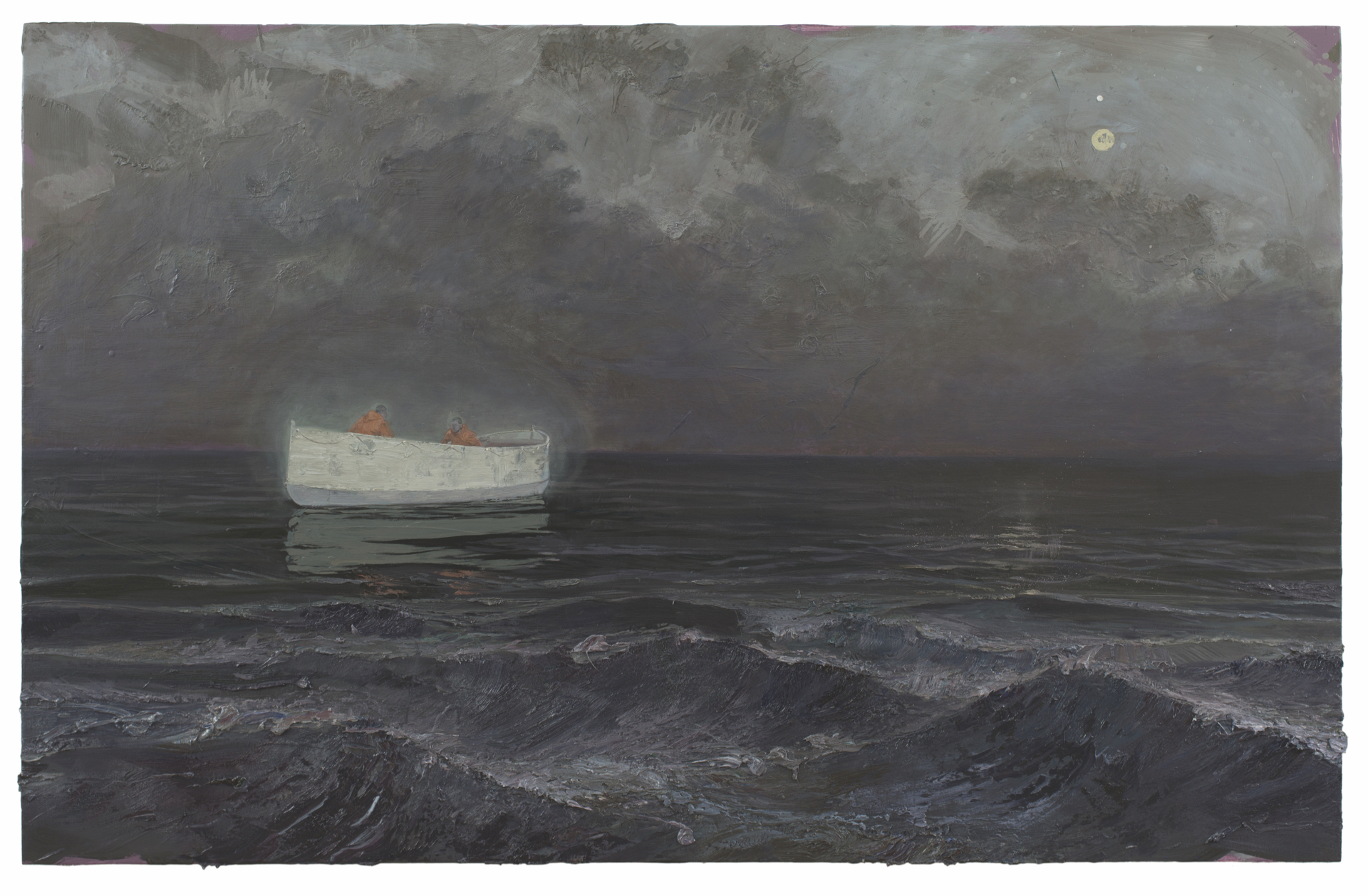 While observing Schiffbruch mit Wolf (Shipwreck with Wolf), a vast canvas painted by Ruprecht von Kaufmann, a boundless feeling of mysterious vastness catches our mind at glance. The sea is a mirror to the dark sky and it is only the different texture of colour, smooth and flowing towards the top part of the painting, creamy, mellow and layered towards the bottom part, that allows the eye to distinguish what is air and what is water. A boat lies in the center. This main object is the only one that captures our eye in this continuum of purple, indigo and silver shadows. On board two men in front of each other stand out in bright orange clothes with blurred features. Hence, where   does the wolf in the title stand? “The wolf shows itself only in front of men who face themselves alone”; with this quote the artist partially solves the interpretation of this enigma.

We believe that the painting could simply represent the theoretic condition “homo homini lupus” investigated by Thomas Hobbes, which consists of the predatory tendency of human behavior in front of its own kind. But what Kaufmann really seems to explore and display constantly in his work reminds us of a real individuation process, theorized by Carl Gustav Jung. This foresees that the individual faces the brave mission of encountering his own Shadow, the darkest side of human mind, which coincides with the most primitive parts of personality, with the instinctual drive that the rational mind tries to repress. What is shown is the constant journey towards the discovery of our authentic nature, an introspective voyage through the depths of the psyche. Therefore the artist often uses the sea, declaring that he has always been fascinated by the ambiguity of water, necessary for life but at the same time an object of mysterious and ferocious destruction. 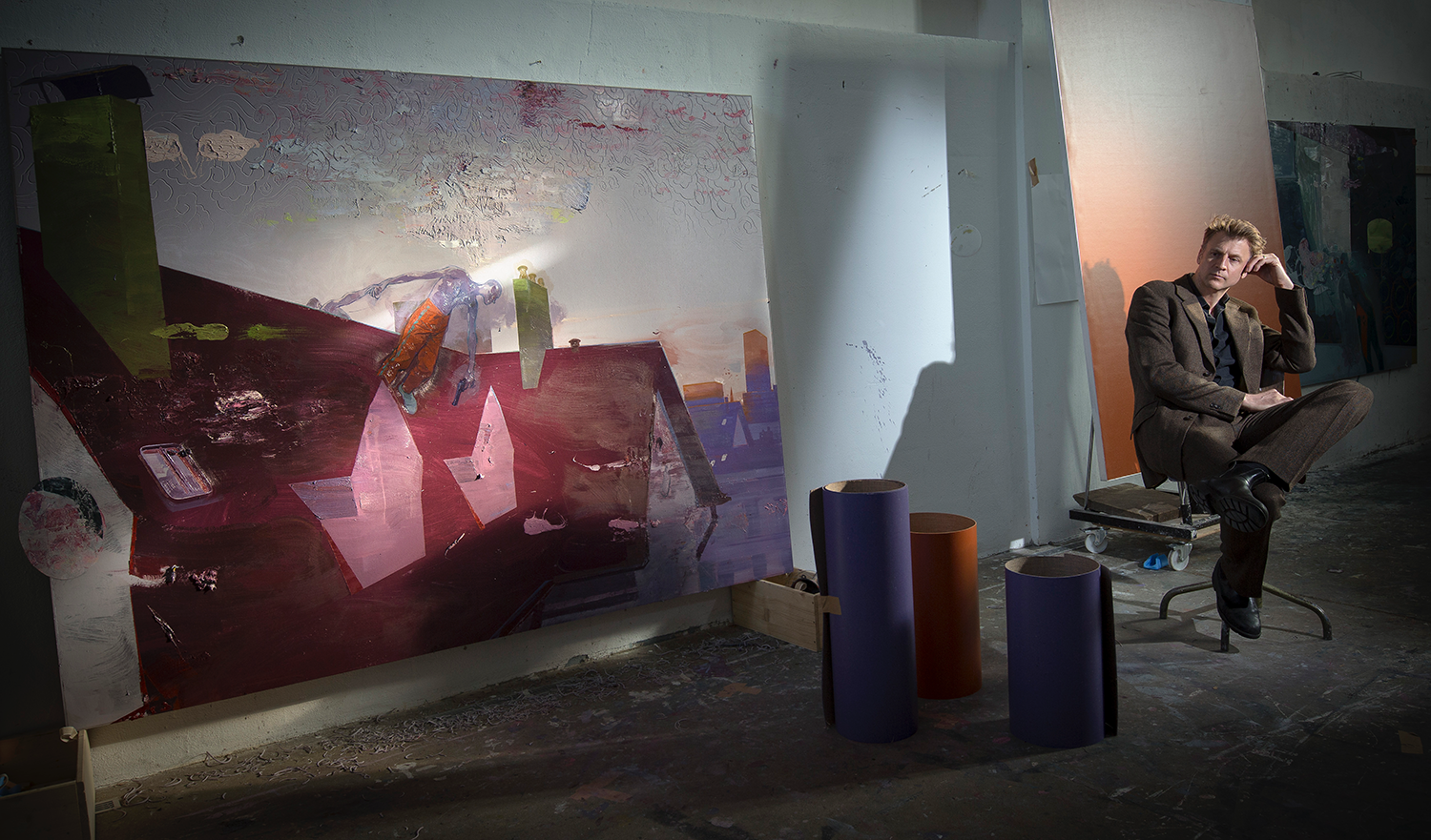 Sea and sky at night create the symbolic landscape which is ideal for portraying the lonely introspection process and the shades of the painting, often used by the artist, because they have “a very immediate emotional impact on the viewer”, allow the audience to experience a direct empathetic connection. Kaufman says: “I’m interested in what lies before rational thought”. For this reason a strong mythology and animal reference is present in his work. Therefore, in myths he seems to favour creatures in which human and animal nature coexist, such as the Sphynx, centaurs and minotaurs. In these figures the instinctual part exists strongly, as well and still is today, despite the secular process of civilization, in the subconscious of mankind. In fact, men are the only cultural animals able to handle their wild side through rational thoughts and feelings which are sublimated and acknowledged emotions. to be dealt with and not  suppressed. “Greek Mythology expecially is full of amorphous creatures, half human, half animal. That’s not a coincidence. It’s a reflection of a very basic human struggle” which consists of trying to keep our body and its animal needs connected with the rational mind. What immediately comes to mind is Plato’s Chariot driven by two horses, one white and one black, dissident driving forces, led by a conscious chase whose task is to be able to give the white stallion reins which will lead him beyond the highest sky to contemplate the Hyperuranion. Kaufmann does something different, employing a more modern and opposite approach. In his painting, the artist seems able to guide his chariot in an exploration, in which he observes the deepest psyche without judging, instead empathizing with the unheard and demanding parts, in order to re-emerge enriched with experience. “When I paint, I’m interested in telling stories of experiences that are both individual and universal […] and that’s why the heads of the characters in my canvases are blurred, erased, covered: I do not want my figures to be portraits of a specific subject but rather archetypes”.  Although the paintings show powerful moving images, Kaufmann, unlike many of his colleagues, does not aim at shocking, he does not use traumatic tricks to describe the journey of the human soul. His work is like a lucid dream driven by an extreme desire of discovery. This desire is devoted to sharing all collective feelings that dwell in every man. 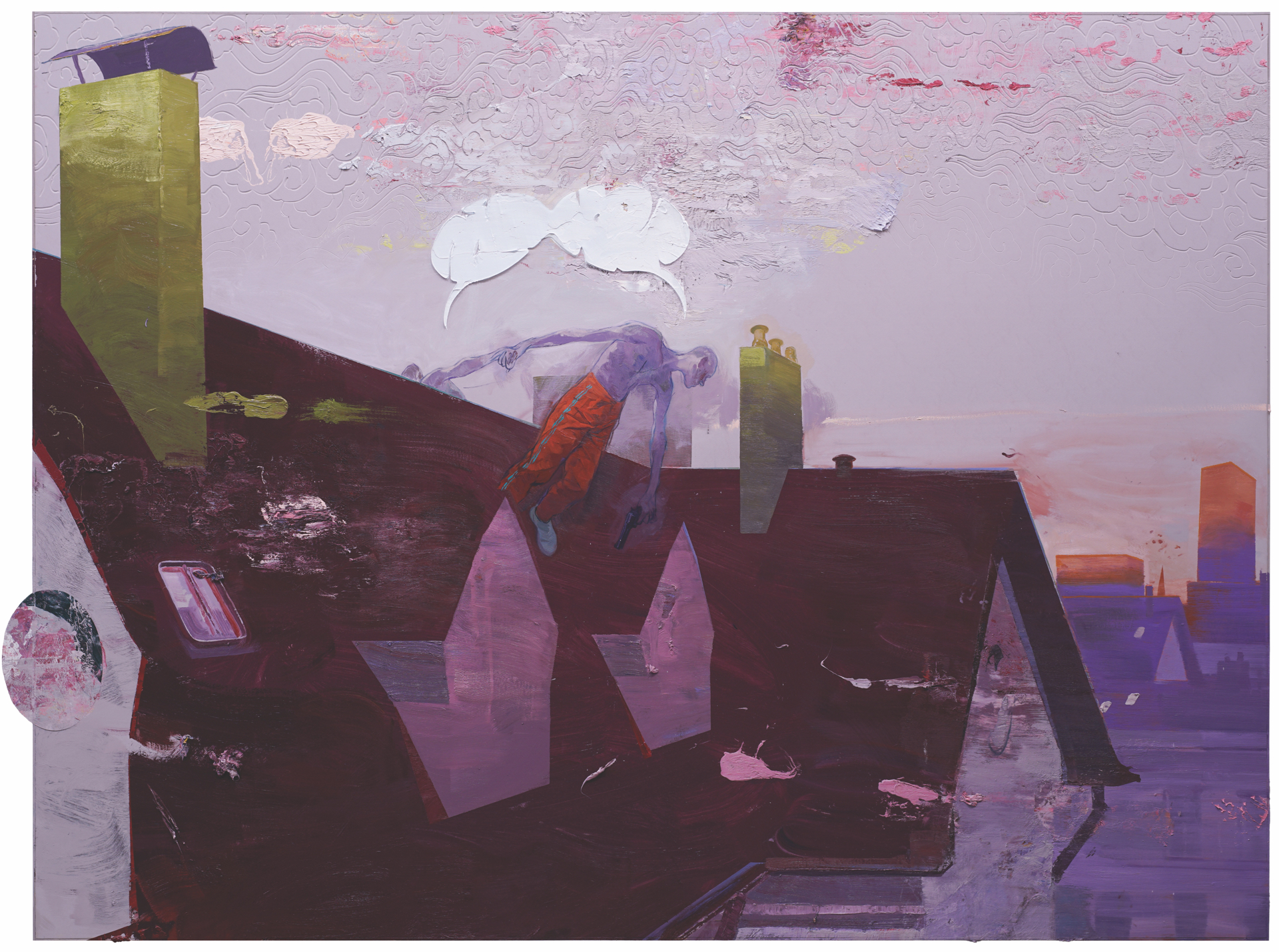