Inside its retro looking universe, fluctuating with references between the virtual and the real, from the digital to the analogue, from the past to the future, Nick Gentry‘s art finds its place in the contemporary art world as a testimony of ongoing change. The London based artist focuses his attention on frenetic social change in relation to an element which is nowadays fundamental and essential in modern society: technological progress. And it’s the technological medium itself which becomes the means to document a world in rapid transformation; Nick Gentry works directly on obsolete storage devices like floppy disks, 35mm film, VHS and X-Ray recycling them and raising them to art status. Gentry focuses his attention on the relationship between human beings and the artificial world which invades, with more and more vehemence, everyday life and the speed at which this relationship and the way information is processed changes. The form he chooses to investigate this process is the human face which merges with the medium becoming an integral part of it, in a dehumanization procedure which appears completely natural – in the exact same manner we rely on storage devices to hold our memories – the metal hub of a floppy disk becomes the eye of a new life form, almost robotic, but that still retains human appearance and features; similarly the layering of X Rays and 35mm film prints becomes useful for outlining the shape of the characters portrayed. 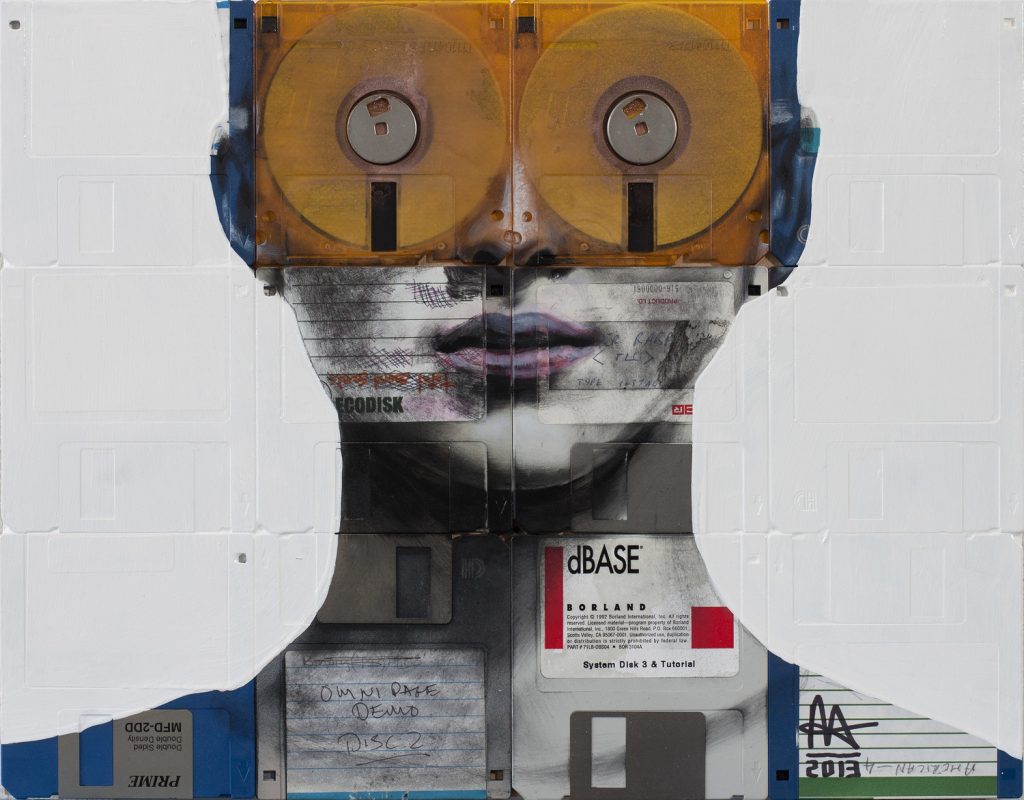 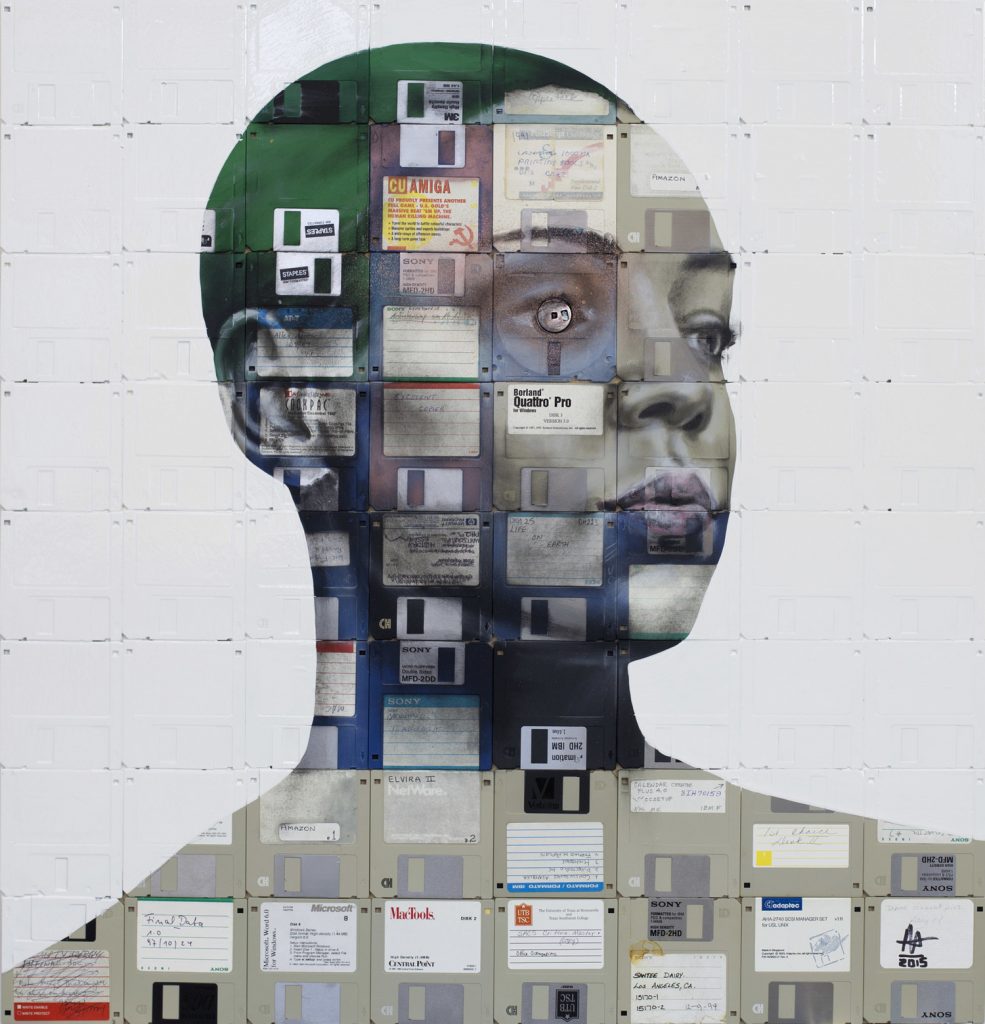 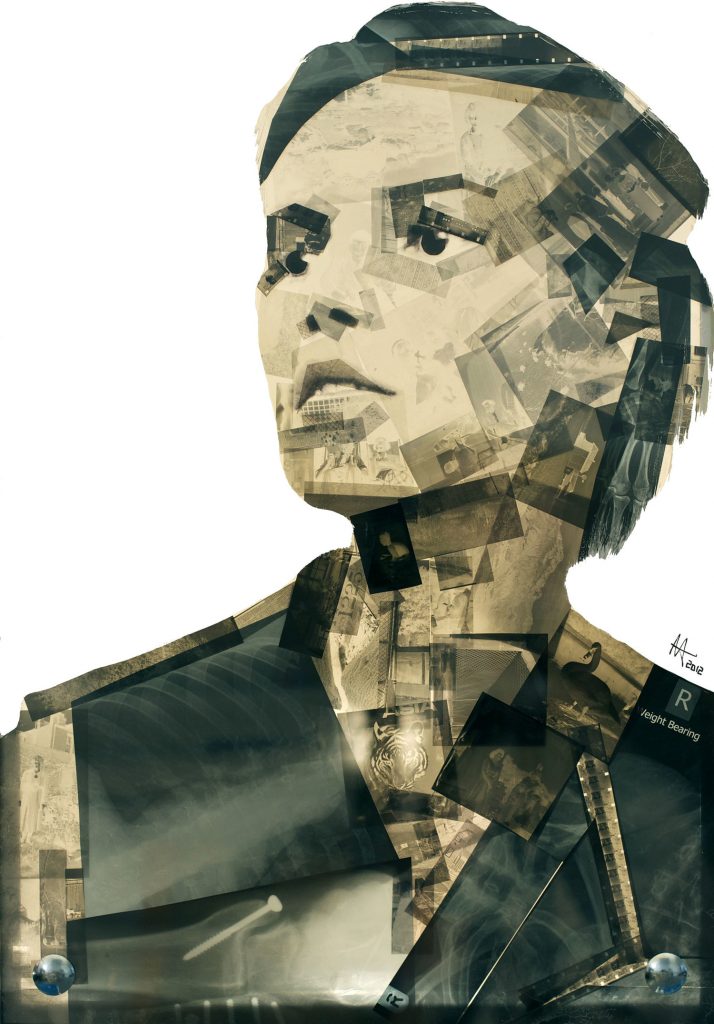 A new life form, newborn but still holding in itself information from the past. The “building materials” Gentry uses in his art works are storage devices he receives through donations from his followers in a project we could call a “social art” experiment. This exchange system and the recycling of obsolete technology recreates new stories which are able to give great power to the pieces since they encompass a collective identity. The purpose of floppy disks and VHS, like the more modern storage devices, such as compact disks, dvds and pen drives, is to retain over time our personal information. They record pictures of our lifes, they store our sounds, our documents, blending with our persona. But at this moment in time the speed in which the technology evolves is increasing rapidly especially since nowadays most of the information is stored on the Web and onto cloud services. Consequently the lifespan of storage devices has shortened and what was once at the height of technology has inevitably become outdated. 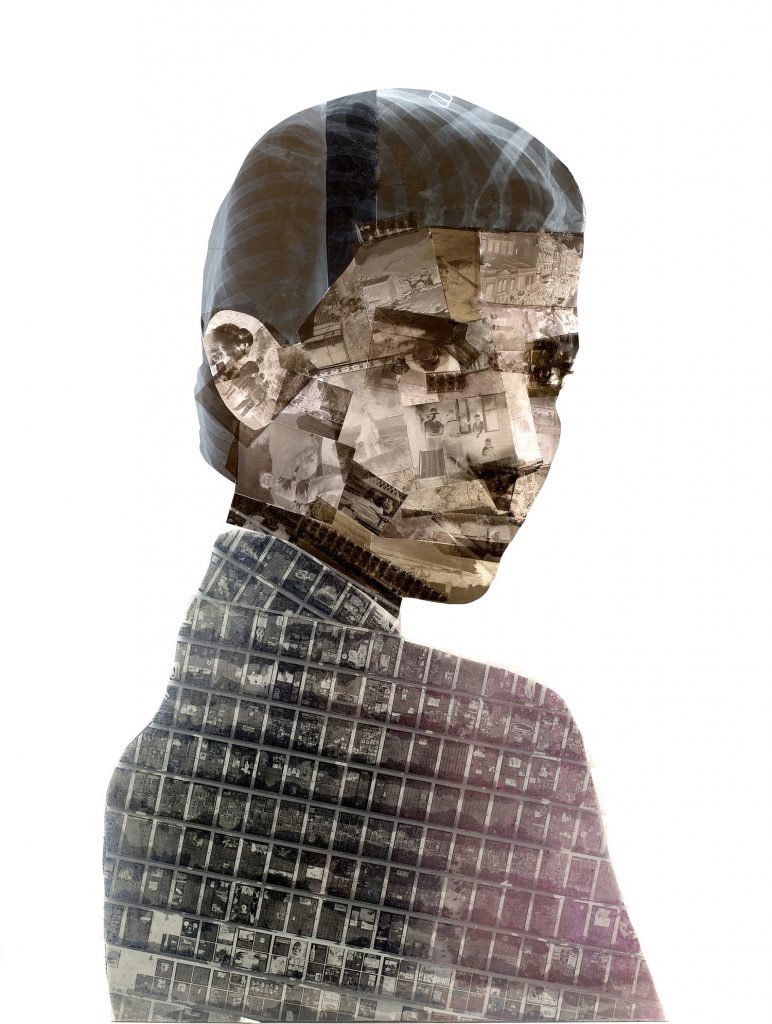 Nick Gentry, analyzing this process of change through recycling brings new life to obsolete materials, giving them new meaning and function as a work of art and food for thought on the relationship between man and machine in a world in rapid transformation. We could think about how, after more than a century, we are still able to watch “L’Arrivée d’un train en gare de La Ciotat”, the notorious work by the Lumiere brothers using a projector, but if we shift from the analogue realm to the digital world are we so certain any audiovisual composition easily playable today will still be available for us to play in one hundred years? The answer is not necessarily positive. The astonishing speed at which the information technology evolves and improves enables us to have more efficient coding systems and storage devices at a fraction of the cost compared to the past. Of course the side effect of this process is that the lifespan of the devices is shortening since they become obsolete at a faster pace. Dozens of different and incompatible standards follow and overlap each other, are then abandoned and soon forgotten. This process is leading us towards a digital oblivion which will make equipment we commonly handle today unusable. The work of Nick Gentry, focusing on obsolete devices brings attention to the evolution of society and technology and helps us understanding how the changes in technology shape our way of living where reality is merging more and more with the virtual realm.